We have both had a tough week of life drama.  Plus, the weather has been TERRIBLE!  Not only has there been snow but the temps have been in the single digits.  On a couple days we were forced to stay indoors and run on the dreaded hated treadmill!  We were both at our limit of limits!  If I didn't get a trail run in soon I was going to go crazy!  We needed therapy!  Trail therapy!  SO this weekend we planned a Monday morning run.

"We are going no matter what!" I told Michele. "No cancelling!"
Later I received a text from Michele that gave hints of her backing out due to the cold and snow.... 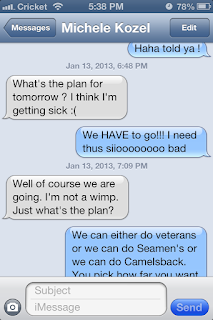 I was so happy that she is not a wimp after all!
We opted to run Camel's Back.  We have a nice favorite loop that we do; Lower parking lot up to Kestral, turn left and do a little of Crestline, then left on the first Redcliffs Trailhead.  We run this down and across the road then head up Chickadee.  From there we veer onto Redwinged Blackbird which drops us back down by the Pond Loop and to the Parking lot.  It is a great loop approx 5.6 miles.

Our start time kept getting bumped back because it was sooooo cold!  I woke up to 5 degrees.  By the time I did leave and reach Michele's it was 10 degrees.  We only run if it's double digits at least so, Here we go!

We were dressed in a ton of layers!  We were trying out our gear for this Saturday's upcoming race; Wilson Creek Frozen.

At first our legs were so wobbly trying to get used to the uneven snow surface.  It was packed down really nicely but I kept stepping in snow holes that I couldn't see.  This made me feel like I had really weird ankles and was quite funny.  Eventually I got the hang of it.

What a beautiful run.  We didn't see any other runners.  What a shame that so many people were missing out on this awesome crisp morning! 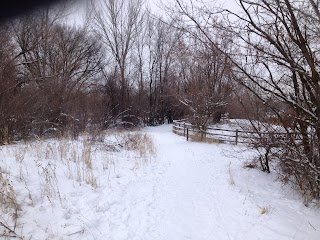 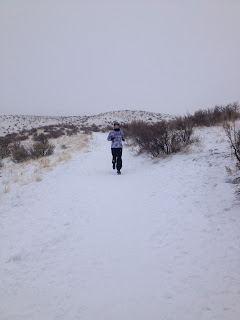 Therapy session completed.  Running in the whiteness, the quiet, it is so energizing.  The big things that seem to be problems get smaller with every step you take on the snow packed trail.  You just feel better.
We headed home feeling refueled and pumped up!  So pumped in fact that Michele sent me a text before I had even arrived back home...
"Can you go again on Wednesday?"