Well, today was the day of our race.  As we drove out to the start we kept watching the temperature drop lower, lower, and lower! We had hired a driver for this race.  Someone to have the truck started and warm when we finished, someone to take pictures of us at the start and finish, someone to drive us home when we were too tired.  That someone was Michele's awesome husband! 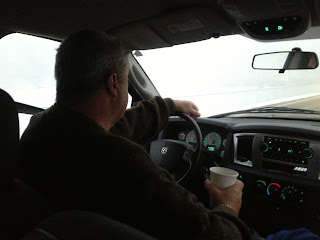 We talked about how CRAZY we were to be doing this as we headed closer and closer to the race! 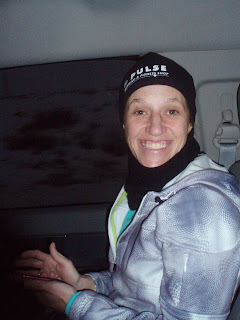 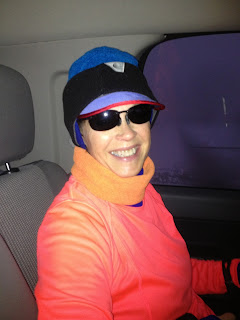 Here is some info about the race we were about to attempt:

Then we got this encouraging message via e-mail the day before the race....

Bring handwarmers, scarves, plenty of layers, and an emergency whistle. There are many sections of the race where access is limited or non-existent. Plan for how you are going to keep your water from freezing, and keep enough fuel with you to sustain you should you be out there for longer than expected. BE PREPARED TO TAKE CARE OF YOURSELF,and be prepared to help another runner out if necessary.

Now that makes you want to run doesn't it?

We got there safe and sound.  When we headed into the warming tent to get our numbers I told the volunteer my name.  She looked my name up and said "#475."  The other volunteer said, "Oh I just gave that number to someone else."  Dead silence, I just stood there.  What do I do?  The other volunteer kept looking as she said, "I know I just gave that number away."  Michele said," no you just did #375."  Luckily it was Michele who was right and I got my number okay. 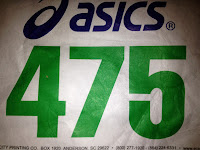 At race start it said -1 degrees!  Miraculously the only thing cold on me was my toes!  We got in line for the bathrooms.  I told Michele that if we went in together we would get to stay in the warmer area TWICE as long!  These weren't porta potties they were bigger permanent buildings.  She laughed and when it was my turn she ran in with me.  I can only imagine what the people behind us thought. Kris didn't join us!   Hey, while each of us took care of our business, the other person had their back turned! 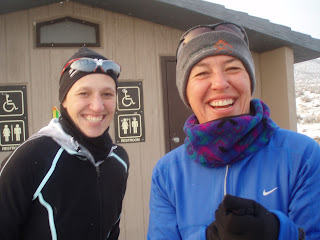 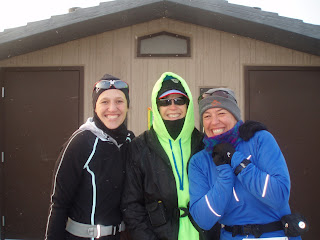 We came upon a lot of friends and people that we knew.  That was fun.  Kim brought it to our attention that MY name is NEVER in the blog!  I realized that was true!  Hah! So, my name is JODI!! I am Michele's younger sister and am slowly growing to be wiser. 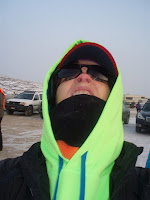 The start was soooooo cold!  We were dressed in plenty of layers, but not moving around was making us cold!  Kris was trying to take a picture of herself while screaming, "THIS IS SO STUPID!" The race photographer snapped a photo of her while she did it!  It's funny to see the two shots side by side! 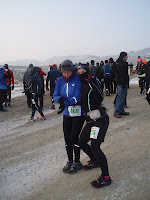 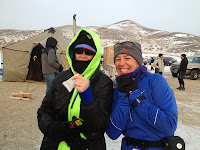 This whole week Kris has been really sick and we weren't sure if she would race with us today.  But she showed up, ready to go! Is this a good idea?  Too late! They finally lined us up to start the race, AT LAST! I was getting cold and needed to start running!!!  Our toes were numb.  I mean it!  We had absolutely NO FEELING in ANY of our toes! Michele said, "First one to feel their toes gets a dollar!" 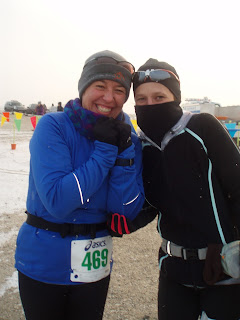 The race start was signaled by a shot gun! Yes, a real true life shot gun! I LOVE IDAHO!! 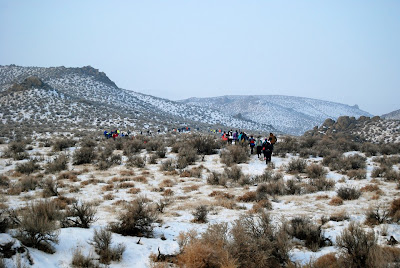 The trail at first was packed really nice.  It was COLD but doable.  I started to feel my toes at about mile 1. That's about the same time that Michele did too so nobody won the dollar!  Kris started falling behind. This was weird, not like her.

Then the snow started to get powdery and deeper and uphill making it much more difficult to run in.  We had our Yaktrax on, but traction wasn't an issue.  It was the depth of the snow.  We trudged on, doing a good deal of walking now and then.  Kris kept falling further and further back. Each time we stopped to wait for her we discussed the fact that she was too sick to be dong this race today. 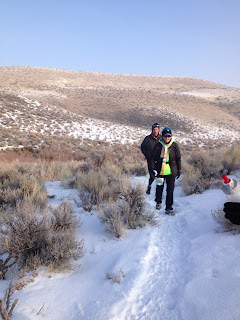 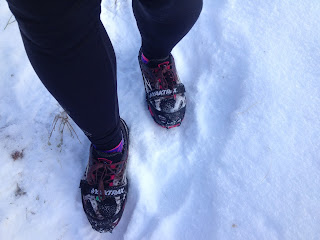 Then I had decided that since this was a long drudging run, I wasn't going to look at my watch.  I knew it would be mile 4 when we reached the first aid station.  But, I was afraid that if I kept looking at the mileage it would make the run seem even harder.  So, my watch was tucked way up into my sleeve where  I couldn't easily get to it.  Just then Michele yelled out, "That's mile 2!"  AAAaaahhhh!!  I forgot to tell her my decision!  "Michele!" I yelled, "I didn't want to know!!!"

After what seemed like forever, we spotted our first aid station!  That powdery snow, going uphill was a tough one!  Here we are coming into the aid station. 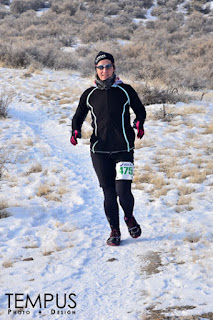 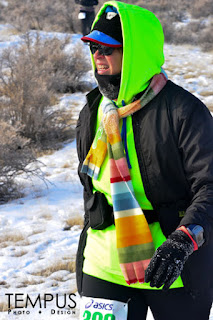 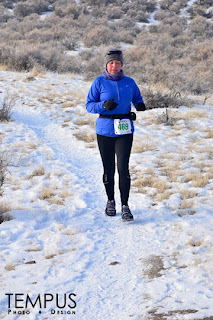 At the aid station we decided Kris was too sick and needed to opt out of finishing.  We tried to convince her but she just yelled at us!  Stubborn woman!!  She told us to go forward without her!  We didn't want to leave her but she kept yelling at us to do it!

Before we headed out though we enjoyed the wonderful aid station that was Rocky Road.  It was fabulous.  The volunteers were friendly, the food/snack choices were awesome and plentiful!  I ate some frozen peanut M&M's that really hit the spot.  Then we had a cup of frozen slushy Coca Cola that was delicious!!  I never drink caffeine and I wasn't sure what this would do to me.  "Watch out!" I called to Michele as we resumed running, "I just drank caffeine!"

We did ask Kris one more time if she was sure and she waved us off.  If we had stayed I think she would have started cussing at us!  So we headed out.

The race report now has two parts, Jodi and Michele's and then Kris'.

What an awesome run!  The scenery was breathtaking!  The trail was no longer powdery and we even found sections that were mostly dirt! 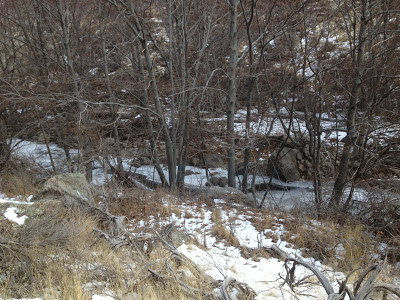 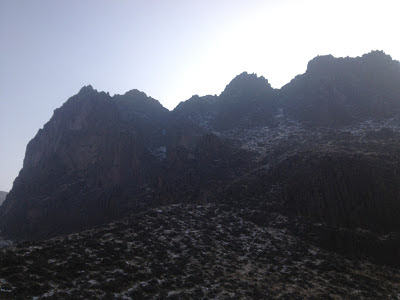 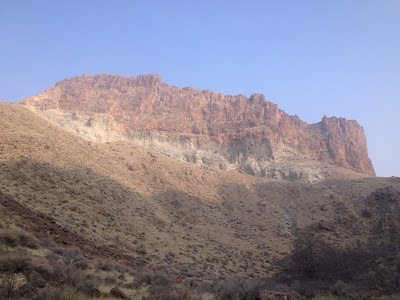 As we ran by the frozen Wilson Creek there was this man that we kept passing, then he would pass us, then we would pass him etc.  This was mostly because I would stop to take pictures.  He didn't seem to be very happy.  We kept making references to "leap frog" when we passed each other.  Finally I told Michele that I wanted to pas him once and for all and be done with it!  So I sped up.  As I passed him I cheerfully said, "Leap Frog again!"  the I heard Michele behind me say "Ribbit Ribbit"  We got a grunt and not much else in response. One thing I have learned in running these past few years is this...If you are not enjoying it, then it is time to stop.

Before you know it, we had the finish line in sight! Just like that!  What a great run!  I never felt cold (after my feet warmed up), never hurt, and enjoyed every step of the run!!  As we crossed the finish line they hung a shot gun shell across our neck!  Our friend Holly had a cold sprite ready for us and Michele's husband was standing there cheering us in!  Michele had said several times during the race and again at the end, "I would do this again."  I totally agree! 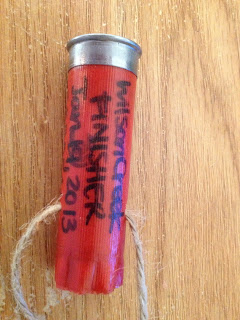 Kris....
Well Kris finally did decide  to not finish the race.  Unfortunately it wasn't because she listened to her wise, loving and caring friends who were worried about her.  No it was the ROCK that made up her mind! 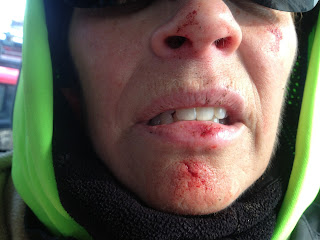 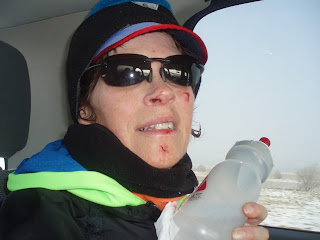 Poor girl! She ended up with a cut chin, scraped nose and cheek, and bruises EVERYWHERE!  She also got a slight concussion and her husband had to wake her up every three hours.  Hmmm.... he may ban her from running with us! That would be a shame!