Today was my second race for 2013.  In continuing with my marathon training I ran a 10K today.  My son signed up for the 5K and Michele and Kris the 10K.  Some life events prevented Michele from joining us but she was there in spirit!

My race prep actually began the night before.  I lay in bed listening to the wind howl like the big bad wolf trying to blow my house down.  "Dear Heavenly Father," I prayed, " Please don't have this wind tomorrow.

Race morning.  Hunter and I left the house at 8:30 AM.  The entire drive to Ann Morrison park I kept analyzing the wind.  Trying to figure out which direction it was blowing, if it seemed to decrease in strength as we got closer to Boise.  Would we had a head wind for the first half or second half of the race?   Finally Hunter had enough and said, "Mom, in this wind it will be a headwind both ways."  That sounded like how it usually is around here.

We got to the race early enough to park right near the porta-pottys.  That's great because I get race jitters and have to 'go' a lot before race start!  It was so cold and windy.  Hunter didn't want to get out of the car but I made him.  He hasn't been feeling well for the past few weeks and so his training has been slim to none.  But give him credit, he was here.

Then Hunter asked the same question he asked at the Hot Chocolate Fun Run in December... "Why are races always held in the morning!?!?!?!" Typical teenager question. Then he thought about it and said, "Hey, no matter  how terrible I run I will still win my age group because no other teenager is going to be up this early on a cold Saturday!" 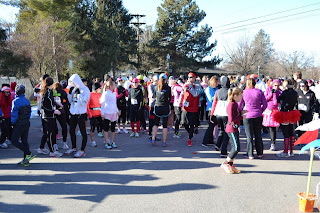 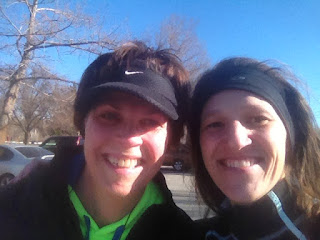 Kris met us at the start and we all bounced around trying to stay warm while we waited for the race to start.   Race Director Wayne was taking photos of runners.  Hunter and I posed for a "thumbs up" picture.  Kris was working on getting her watch on.  After he took it she realized that she missed the photo and yelled at him.  "Hey! I always get missed in the pictures! Take another one!"  So laughing we posed for one more.  Only Kris would yell at a perfect stranger.  Poor Wayne. 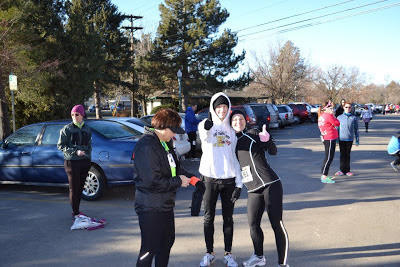 When they said "Faster runners get to the front"  we wished Hunter good luck and sent him on his way.  The course was an out and back so we knew we would see him out there at some point.
GO! 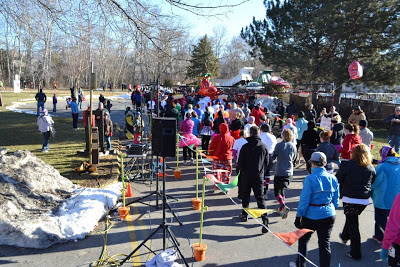 I took off fast, like any one would do with the race adrenaline pumping through their veins.  I had to keep reminding myself not to look at my watch and just focus on how I FELT as I ran.
Here are some pictures of us for the first half of the race. 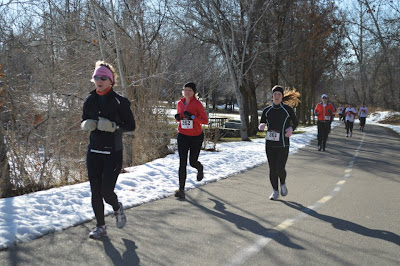 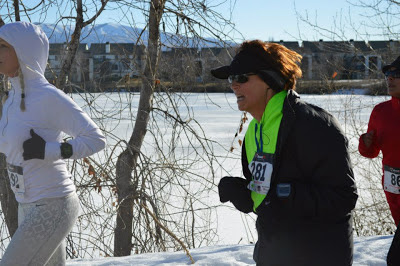 After only about 10-11 minutes of running here comes Hunter on his way BACK on the 5K.  He was in 2nd place.  There was no one behind him!  He looked good and smiled!  I was so proud to see him run by with such a strong lead.  As he passed Kris she gave him a high five.  Then she worried that she may have slowed him down!! No worries it didn't!!  He ended up in second place EASILY.  So much for being sick and not training! And as a side note, he was right.  He was the only one in his age group. No other teenager was crazy enough to get up that early and run in the cold wind!! 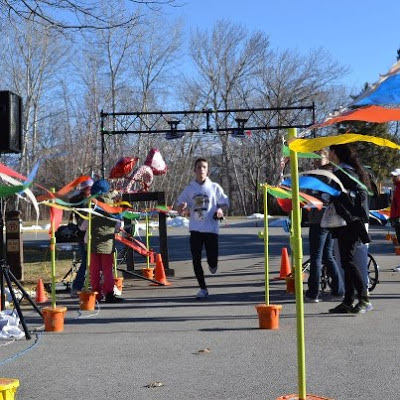 The head wind was pretty tough.  But I kept hoping that eventually I would get to turn around to a tailwind!!

At the 5K turn around I was already feeling winded.  That was probably because I had so much WIND blasting in my face!  I just tried to focus on my stride and my music and enjoy myself. 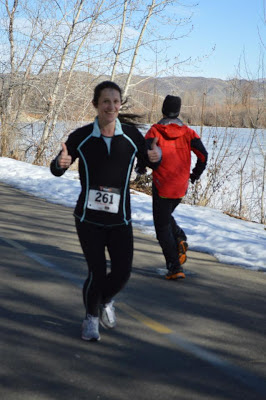 When I was finally closing in on the 10 K turn around I started to count females in front of me.  Oh darn!  I was in fifth place!!  I knew that final kick events had some awesome prizes for the top three male and female.  I didn't think I could catch anyone because they were a good distance ahead of me.  Trying not to be discouraged I just focused on my stride. 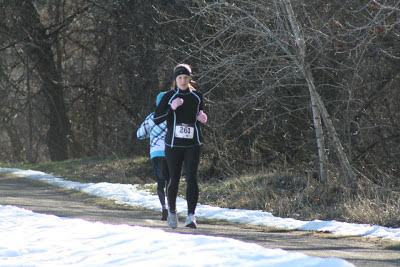 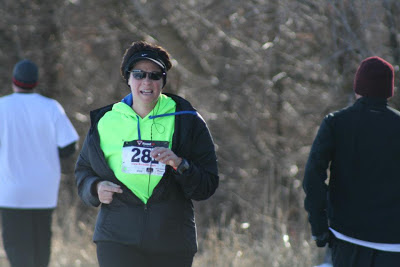 I passed Kris and she gave me the waving, shouting, smiling motivation needed to carry on.  I was feeling the mental push to slow down, but I had to fight through it!  Then along comes a woman who I had never seen before.  As I pass her she yells out...you are number 5!  Look lady. I know that.  Are you rubbing it in or encouraging me?  Then BAM! It hits me. That is what Michele always does to me on races that are an out and back.  She counts the women in front of me to motivate me to push it.  She did it on Les Bois, then again at Race to the Summit.  It works too.  So I was no longer grumpy at the stranger, today she was my Michele.

I started to focus in and see if I could pick up my pace a little. and then......

Wait a minute!!  That lady ahead of me is getting closer!  I had kept my steady pace and she was slowing down!!  Soon I was passing her.  WooHoo!  Now I was in fourth place and I could see the third and second female in front of me.  I was really running harder than I had planned but felt OK. One more cheerleader pushed me on, Christie Ebenroth was running back through the course in a tutu.   A shout and cheer from her and I knew I had it in me.  Then before you know it, I was in third place!!!!  It was so awesome and rewarding.  I pushed through something that was hard for me.  I have never been a short distance speed runner. 5K's and 10K's are not my thing.  But I did it!!! 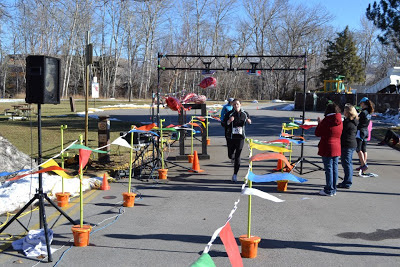 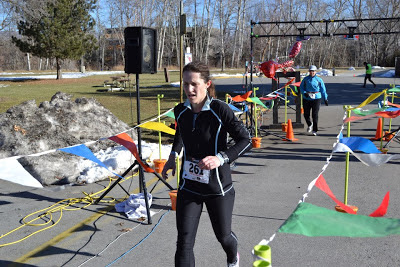 Here are my results:

But the best part?  Seeing my son cheer for me at the finish line.  Then come up to me and say, "Wow mom you really did a good job!"  That was better than any prize or PR.  Spending the time with my son at these races is priceless.


But I am still going to brag about the awesome prizes we got!!  They really rocked!  Socks, gift cards, water bottle, stuffed animal, pillow, blanket, watch, candy!  We were set!! 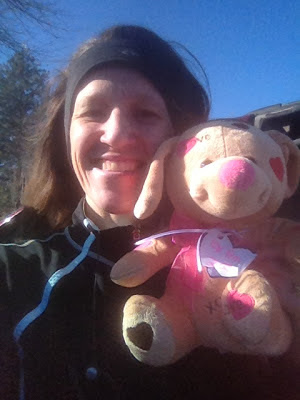 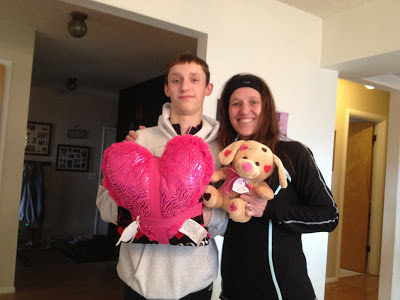 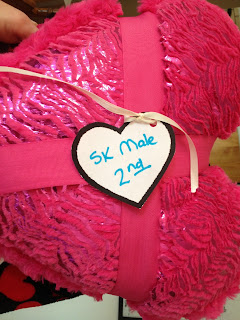 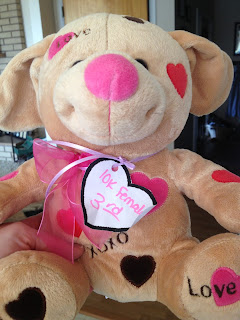 Now we were watching for Kris.  She said she was going to finish in 1 hour and 8 minutes and  she was not going to be any faster!  At one hour we decided to head to the finish line to watch for her.  And there she was!!!  She finished in an incredible 1:02:32!!  She did incredible!!! 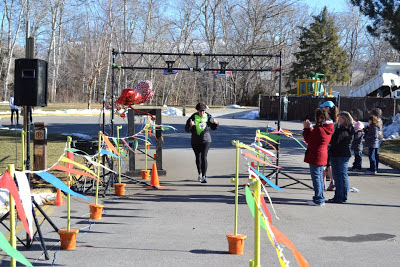 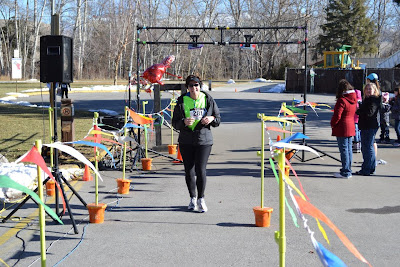 I am happy to say that today was a successful race day for all of us!  Big thanks to Final kick events for putting on such a great race for us to enjoy.  Now all I need is for the trails to dry up!
Posted by Jodi at 6:38 AM