It's Valentine's Day!  A perfect day to spend with those you love; your trail shoes, the trails and your running partner!  Haha!
Michele told me I got to choose our trail for today.  This is quite an honor since she had recently forbade me from choosing any more trails since my choices always end up being back breakers!  So after consulting my trail maps and reading some facebook comments from other local trail runners I picked out what I thought looked like a good 6 mile loop.
We headed up the 8th street extension, intending to park at the parking lot by the Hull's Interpretive trail #0. This was the first time either of us had ventured up this way.  On the drive up we passed by what looked like the remains of a lawnmower that had been hit by a nuclear bomb.  Not exactly a good omen.
We came up to a locked gate.  We could not drive all the way up to the parking lot.  Apparently it is locked until mid-may.Therefore, we could only get within a tenth of a mile or so from the parking lot.  Good enough!  We parked there by the gate and started walking.  We have learned that on our trails, we need a short warm up walk anyway. (especially when the road is still uphill). 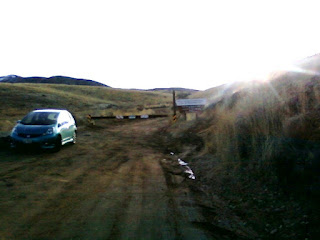 This is a view of the gate.  This is NOT Michele's car.  It is an old man's car who was walking two GIGANTIC white poodles. No joke these things were the size of ponies!

We quickly found our trail head for Corral's #31 and off we go! 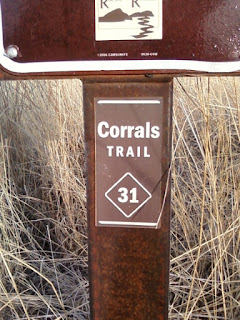 This trail was wonderful! So welcoming.  A nice surface, slightly downhill, good running trail.  We were both so excited by my trail choice.  But then we realized it was a trap.  Like a predator that entices you near its den with good smells and a promise of fun.  Then when it is too late to turn back SNAP! Its got you!  That is exactly what happened to us.
We were enjoying the trail so much, when suddenly!  We came to a fork in the road.  We were now going to switch trails and continue on Scott's Trail #32.  That way we could make a loop (I strongly dislike out and backs). 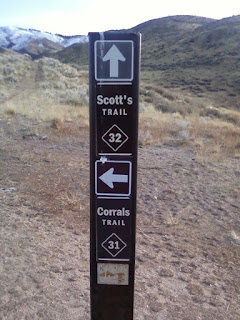 This is when out of no where we were blind sided out of our stupor of lulling downhill enjoyment.
The land of uphills attacked and attacked and attacked!  It was crazy.  Then to make it even more interesting, the trail became narrow with a terrible runoff trench down the center.  The trails were frozen, no mud, but the ruts and incline made it so challenging to run!  Just walking was making us both breathe like we were in labor!  That is when we decided that had now become a walk-a-thon.  Since we were doing so much walking!


We did a new stride as we ran.  Michele called it the cowboy Scott!  You can imagine what this looked like since you had to basically straddle the trail at some points while trying to run.  We also have come to realize that we loose our common sense brain cells while running hard trails.  I also lose the ability to do any math of any kind which is pretty bad since my degree is in Mathematics.  Michele loses the ability to read.  So we make quite the pair!  It also begins difficult to form words into coherent thoughts.  I would yell back things to Michele as we trudged up hills.  She confessed that she only processes about half of what I say and the just make a sound in response.

We would be walking a hill and I would then decide to run.  I'd call out "Let's do it!  Come on!" Then I'd start running (more like fast shuffling).  I'd hear a reply behind me of "NO!"  But Michele would end up running anyway!

We saw a lot of things today.  Beautiful views! (This is a view of Boise) 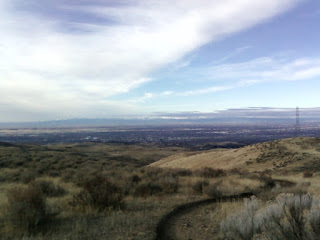 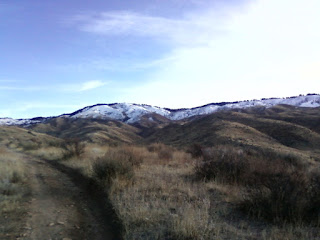 A very close look of Bogus, but I forgot to take a picture.

A weird Christmas Shrine of sorts. 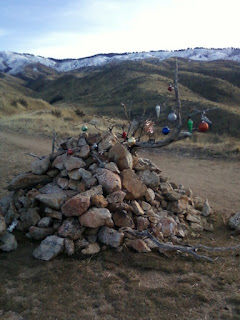 Then as I posed by it I realized that I hoped there was not something or someone buried here. Some crazy runner perhaps? 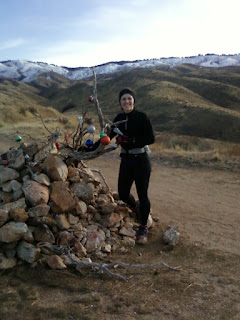 But the most glorious thing we saw was this...... 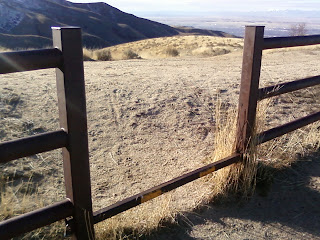 The fence that marked the END of Scott's Trail!  Hallelujah!!  I have never been so glad to exit a trail before!! Michele informed me at this point that she would NEVER run Scott's trail EVER again.

We then were running down the 8th street connection.  It was nice and wide and downhill (mostly) but still a crazy run.  That road is full of crevices, ruts, inclines and sand pits!  It also has very large and deep puddles of water that were partly frozen.  When we came upon the first one Michele said, "I dare you to run across that and see if you can do it without falling in. Come on let's see if you can walk on water."  Now you know how I say I am "always in" when Michele suggests something.  Well, while that may be true, I am not stupid.  So , no I did not try to run across that half frozen pond nor did I try to run over every other one that we encountered that she wanted me to try out.

Michele began to get the "Loopys" as I am going to call them.  On flat ground this usually occurs around mile 17 or 18.  Your thinking gets foggy and you get a little giddy.  Small thinks can set you to laughing, you get puppet legs and sometimes even begin to hear things that aren't there like

But, we did it! 6.6 miles to an elevation of 4,805 feet. Out actual elevation climb was 1,380 feet in 3.4 miles.  It was a harder run than the 16 miler we did on the greenbelt last week and also more fun!  Trail running always is more of an adventure than any other run. So Happy Valentine's day!  We had a great Heartbreaker run!  Though we both agreed it was also a lung-breaker, ankle-breaker, back-breaker, and leg-breaker! 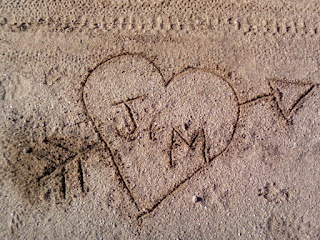 Side note!  We saw the Poop Count sign on our way today.  You will be pleased to know that piles of poop is down from last years count of 81 to 40.  Way to go dog owners!  All of us runners thank you (as do our shoes!)

Another thought.  Why is Scott's Trail thusly named?  I am curious who this Scott guy is. He must be quite insane!!