We had already gotten a trail run in this week and on our marathon training schedule, today was supposed to be 15.  "Let's do our 15 in the trails!"  Michele the wise suggested.  Yep, you guessed it, I was in!  I looked at the map and came up with a genius idea!  (Side bar, non of my genius ideas ever come out like I say they will)

I decided we should run from the Fort Boise parking lot, up Shaw Mtn Road, then up Rocky Canyon as far as the conditions allowed.  Then, we could pop onto Orchard Gulch trail where it meets with 5 Mile Gulch Trail.  This would then come out part ways down Rocky Canyon and we could run the road out.  "It may end up closer to 17 or so, but who cares!"  I said with enthusiasm.  I always feel invincible when I plan runs at home in my sweats!

Aside from the fact that people tend to give you a dirty look and don't like to get out of the way, the run from the parking lot up Shaw Mtn road was pretty uneventful.  We ran pretty good up Rocky Canyon.  I am feeling prepared and really excited for Robie!

We did not make it to the Summit today.  We did hit some snow and ice, but nothing impassable.  At the point a half mile from the summit when it gets really steep, it was too icy.

This is a view from where we stopped. 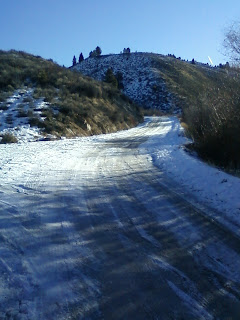 Jodi running on the snow and ice.  We wore only trail shoes, yak trax weren't needed. 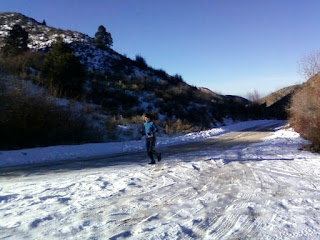 Here is where we should have turned around and just done the road down and called it good.  But NO! I wanted to try a new trail today!  So we ran back down the road to the Orchard Gulch Trail head #7. 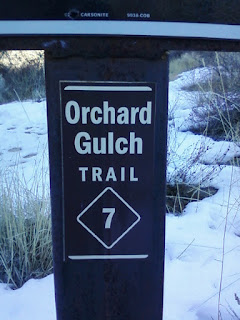 Here is how the trail looked at the head. 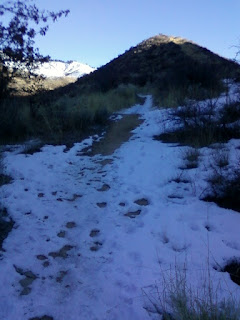 And the Insanity Sisters (which is what I think we should be called) declare, "Looks great! Let's do it!"  Running UPHILL  in the SNOW is a different experience.  You step differently, you run differently, you use different muscles.  Thus, you get tired faster, feel the burn sooner and harder, and (haha) walk more! 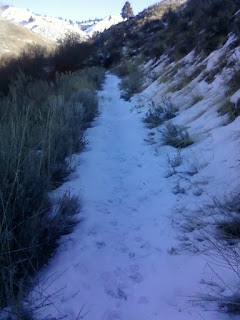 It kept climbing and climbing.  The snow slowly getting deeper.  It was tough.  I finally declared that I was going to imagine we were in a plane crash and our only hopes of survival was to RUN our way out.  I needed some motivation, all be it imaginary, to run in this snow!

One mile and four deer later, we stopped.  The trail ahead was still climbing and staying quite snowy.  This loop could possibly be a total of 5 miles!  We agreed it was wiser to go back down.  This trail would be reserved for another day, a dryer day, a non snowy day.  But the view was INCREDIBLE up there! 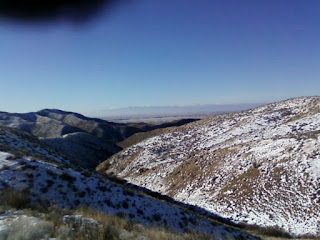 So down we go and ARGH! It is harder to run down a snowy trail than it is to run UP!  Who would have guessed!  WATCH YOUR STEP!! 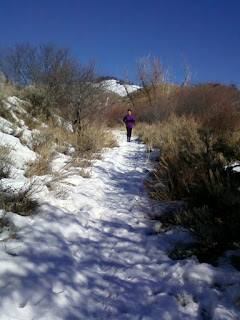 We came back out at the trail head, EXHAUSTED!  Our madness is escalating to the point of certifiable insanity!  Now we were going to just run Rocky Canyon Road back to the car, at the Fort Boise parking lot.  Those of you who have run this....we will confess we did walk up the hill to Shaw Mtn Road.  (I think we earned that right!)

This was to be the 15 miler that felt like 20!  I could feel tightness in every part of my legs.  It felt like someone hit my calves with two by fours!  "Worst run ever!" I said.  But then Michele reminded me that when the endorphins kick in later I will be saying "Best run ever!"  She was right of course!

We wore our new bracelets (thank you Michele) that declare our true running spirit.  It is hard to read in the picture but they say "TRAIL MADNESS" and they are never taken off. (ahem Michele) 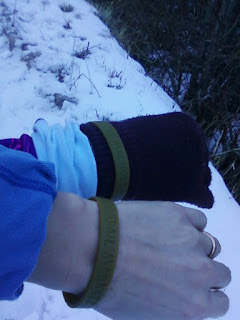 So 15.5 long miles later we are at the car, stretching and laughing about how stupid we are but at the same time how much fun we had.  I am happy to say that some ice cold dark chocolate milk and a Jimmy Johns sub later, I felt like a million bucks!

One last thing.  I am a pretty competitive person.  I learned today the Michele burns more calories than me when we run.  That doesn't seem right since I run just as hard!  I guess the only solution is to put in ten pounds so I can burn more calories and beat her at that!!!
Posted by Jodi at 5:45 PM