Oh boy. Where to begin.
Yesterday my sister, myself, the bossy-bandit and coffee-Zack finished the 35th Annual Race to Robie Creek, also know as the Run on the Sun! I am re-naming it that because it was like a BILLION degrees with no shade!  I am also re-naming it from the "toughest" half in the Northwest to the "dumbest" half in the WORLD! 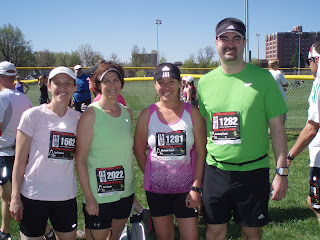 So I may sound bitter, and I believe rightly so!  No one in their right minds should run a race in 80+ heat, uphill most the time, and start at NOON!  But, I am not in my right mind and apparently neither are at least 2,500 other people.  For those of you who enjoyed yesterdays heat wave in the shade with lemonade or in a pool, I so envy you!

It didn't start well for me. Last week I developed a sinus headache, cough, sore throat and slight fever.  These carried on to race day.  I showed up for the race with all kinds of medicines in my bloodstream, including a few puffs on my inhaler.  Then my water belt broke and I had to run with one of Michele's.  These were all signs that I should not run this race! 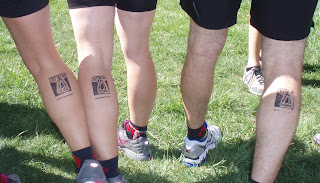 As we lined up for the last minute bathroom relief, Michele made some new BFF's in the porta potty lines.  We stamped robie tattoos on our calves and stood in a crowd of people like cattle waiting to be butchered.  That analogy is a pretty close reality to the way we all felt afterwards!

I will say this.  I do not feel guilty for having to walk as much as I did.  This is because I generally saw more walkers than I did runners.  It was just too hot to care.  I saw a man off to the side with medics and oxygen on him, his eyes were closed, not a good sign and  I saw another man on the side crying out in pain because his legs were so cramped.  I do not think anyone died though, at least not yet.

The summit is the most  grueling part of this race.  We had trained it a few times.  But yesterday they must have brought in trucks and made it not only LONGER but also STEEPER.  It just never ended!  As we were going up it there was a group of people with strange foods and cheering us on.  Michele said it's called like "temptation corner" or some dumb thing like that.  I ask you, who is gonna want a bite of sushi at mile 8 of the uphill run through fire?  Then there was a man dressed like some strange jungle man with a huge wig.  He was yelling in a megaphone telling us to pick it up and run!  The nerve!  I had no energy left but I thought, "I have just enough to go shove him off that rock and down the ravine."  Do not worry, I instead just glared at him as I WALKED by.

As I passed each aid station I would longingly look at them and secretly wish they would call me over. "Ma'am you don't look so good. Perhaps we should help you."  But, alas they never did. I was forced to dig in and complete the race on my own power.  Which I am proud to say I did, we all did.  And we can live to tell about it.  We survived the stupidest idea ever, to run a grueling uphill race in the scorching heat, just to say that we did.

After the race, when I became less disoriented, I had time to ponder on my running career and came up with my 7 new rules to running:

1)  NO running allowed in any temperature over 65 degrees Fahrenheit!
2)  NO running in races where there are no medals awarded.  If I work that hard I want more than a bottle opener, pin, or crayon!
3)  No running in races where the finisher shirt is LAME.  Oh yes, you know which races I mean!
4)  Jodi is not allowed to run alone.
5)  Never run races when they go off clock time instead of chip time and it takes you 2 MINUTES to cross the starting line!!
6)  Never run in a race with an Asian based theme.
and 7)  Robie is DEAD to me!

I wasn't the only one who experienced so much enlightenment this race.

Coffee-Zack felt compelled to confess to his transgressions.  He had lied and told us that his longest training run was 8 miles.  Apparently it was only 4, way to go genius!  Kris realized quite a bit.  First off, a 6 hour energy drink before a race isn't much better than a 5 hour energy and neither of them last more than 1 hour.  Secondly, a three day carb load, not the best plan.  Also, her 11 trips to the summit in training did not help one bit.  She has therefore officially RETIRED from Robie, and good riddens to it! I realized that no matter what Runner's World Editors may think, running without music is STUPID! 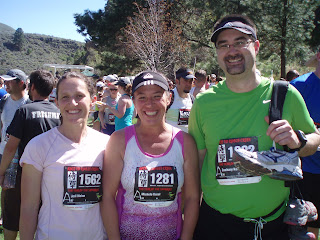 Only Michele felt like running in brand news socks wasn't dumb.  Poor coffee-Zack ended up with elephantitis of the toes.  They were so blistered that it looked like a toe growing on a toe!  And one of Michele's porta potty BFF's found her after the race for some congratulatory chatter. 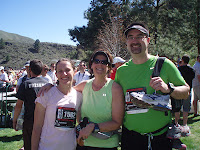 When I was getting every one's new found wisdom in the car ride home to add to this blog, Michele had no input.  She was laughing too hard to speak.  I believe it was also a touch of delirium.  If she ever returns to normal perhaps she can enlighten us.


Coffee-Zack plans on being back next year.  I say good luck to him.  I will not accompany him on this second act of stupidity.  Do it once, you are crazy, but admired for finishing.  Do it again?  Now you are just being stupid.

How much did I hate this run?  When I passed a photographer taking race pictures I gave him the universal sign for choking.  Enough said. 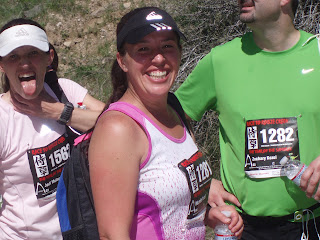