Wow.  Today's trail run?  I am almost at a loss for words....notice I did say ALMOST.

Michele and I sat in her backyard last week while the kids were swimming with my ridge to rivers map, deciding what our next trail run should be.  We wanted to get a 14 miler in, to stay on track for our marathon training.  We were very excited when we mapped out a course that looked to be between 14-15 miles.  Michele wrote it all down on a tiny slip of paper for our hydration pack and we congratulated ourselves on such a great idea!

That was a week ago.  It is amazing how utterly and completely wrong we were!

We begin at the parking lot at the trail head for 5 Mile Gulch.  WooHoo here we go, so pumped up for our run.  "What do you think it's gonna be for time?"  "Probably 2 and a half hours." Oh boy, were we off!  We have ran part of 5 Mile Gulch before.  It is steep but not unbearable.  However, when we came to the turn to take Watchman and didn't, we regretted it!  I am still regretting it.

Our course for today began with running the entire length of 5-Mile Gulch, trail #2.  The 2 must stand for how many minutes you are on it before you realize you should GET OFF OF IT!  This trail was so steep!  A couple miles in our calves and achilles were on fire!  We had to stop and biofreeze them right away!  The elevation climb turned out to be 2092 feet.  This was achieved in just over 3 miles!  That is over a 620 foot gain every mile.  There were many moments when we both thought that this was a bad idea but neither of us voiced it.

Our Garmin watches are set to "auto-pause" when we are stopped.  There is a beep noise when this occurs. As we desperately climbed up this trail our watches keep auto-pausing becasue of the slowness of our progress.  We finally decided to de-activate that feature.  It was like being "gonged" or "buzzed" off from a talent show contest.  You are so bad "Bong" you lose! Michele said she felt she was on America's Got Talent and was getting "X-ed" because we were going so slow.

The incline was so steep that we had to walked hunched over like a neanderthal with our knuckles scraping the ground (hence the title of this blog).  I later demonstrated this pose to Michele.


Finally we reached the end of 5-Mile Gulch and Ta-Da! we were in the forest!  It was very pretty but quite a challenge to get there!  The trail came out to a fairly open area.  We took a break and took a breath.  We had climbed in 3 miles almost 3,000 feet in elevation.  It had taken us almost and HOUR!
H-E-L-L-O.....who's idea was this anyway? 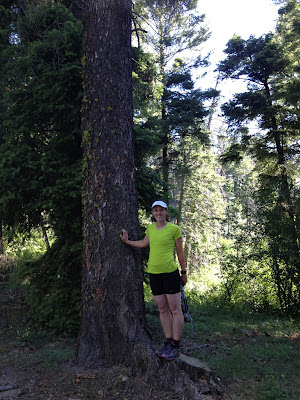 From here we headed left onto Trail "D", which is Boise Ridge Road.  This is considered a primitive road and wasn't too terrible to run on.  It was actually a nice break from what we had just done....UNTIL! 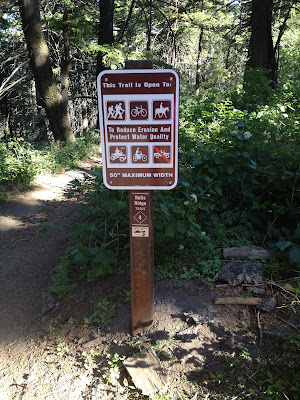 We were next to step off from "D" and head left onto Trail 4A (I don't think it has a name).  This was brief and came right out to Trail #4, 8th Street Motorcycle Trail or Hulls Ridge. This was a BAD IDEA!  This trail was rocky, sandy, crooked, rutted, full of moguls. just terrible!  Here we had the opportunity to run downhill...but becasue of the road surface we were forced to WALK!  Walking down hill is awful! I almost bit it several tmes.  This was definitely turning into an adventure tat we did not bargain for!


One thing about this down hill that made it so weird to run is that it was also covered in MOGULS!  Just like on an Olympic ski hill.  You felt like you were on some weird roller coaster running up down up down up down.  I kept making "woooo-woooo" noises as I went up and down them.  This only made Michele start laughing, then she couldn't breathe, then she couldn't run.  We were not even half way in to this run and we were physically exhausted!  When that kicks in you get the sillys and giggles and puppet legs and its hard to focus.

Finally after what seemed like DECADES we came to Trail #5?  What?  That wasn't on our planned route!  There was no other direction to go though.  So, we headed left on trail #5 Freestone Ridge, hoping that this would get us to where we wanted....and it did!  (turns out we had read the map wrong when we planned out this jewel of a run).  It was great to be back on trails and off of Motorcycle trails.  I do believe that Michelle said at least 4 times, "new rule...we do NOT run on motor cycle trails!"  Yes, it was that bad.  I will say this about trail #4, we've ran it so you don't have to.  Please heed our advice and DO NOT DO IT!

Well, happily we came to our intended trail #42 Fat Tire.  We have ran this trail before and LOVE it! About half way there is a really big flat rock with a huge heart made out of smaller rocks.  This is there because this trail LOVES RUNNERS!  It has a great surface, easy up hills, etc.  Nothing like the garbage we had been running on! 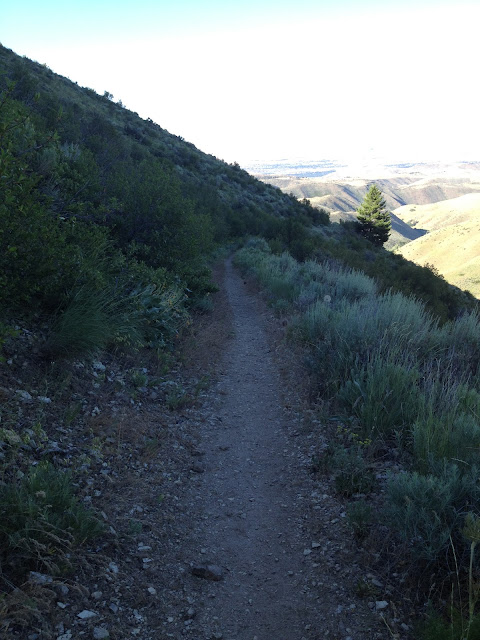 After Fat Tire we came to our next turn.  Onto #6 Femrite Patrol (or Curlew Connector).  We could go either left or right.  Michele said we were always going left, so left it is!  Michele has a neighbor who is a big time biker and owns a bike shop.  He said that Femrite was a killer!  Did we heed his advice? No, we scoffed it off.  One of our many dumb things we did leading to and on this trail!  So off we go.

Well, he was right, Femrite is a killer!  Very tough up hill, rugged terrain and not ankle friendly.  As we approached to trail head, exhausted, I yelled out "NO!"  The marker read Trail #4!!!!  We were back to where we had been several miles ago!  That terrible motorcycle trail.  It was like one of those cartoons when the stupid cat goes in a circle and winds up right back where they started!  We had no alternative but to turn around and head back down Femrite.  Do not go left, go right!

We stop to hydrate and empty our shoes which are full of rocks and sand!  Michele says, "That's it, water emergency I'm out!"  I check mine and I have about 6 ounces left.  Time to ration!  "We get a sip every mile."  I announce.  See it was getting warm, we were VERY tired, AND we had no idea how far out we still were and how much longer we had to go.  Not a good position to be in.

Heading RIGHT on Femrite we run, walk, shuffle, drag, run, jog walk, shuffle, etc.  My shoes are already  FULL of dirt and sand again because I am not really even picking them up off of the ground in some spots.  This trail is going on FOREVER and is NOT runner friendly!  At least not after all the other trail abuse we have been put through.

We finally drop down to  a creek and see a man, a boy, and a dog.  Michele stops and begins rambling on and on to this man.  She is speaking jibberish and babbling.  He is looking at her strangely and so am I.  She is yelling too.  So I chime in and explain to him the terrible trail and getting lost and trying to find our way to Watchman.  They are both looking at me strangely too.  Later Michele told me that I was speaking jibberish too. (I wonder what that man thought of us?)  Finally he asks, "Are you lost?"  Michele cheerfully yells, "Nope not anymore, as long as this goes to watchman."  Talking slowly he replied, "Eventually."  So we smile and wave and head off.  Another climb ahead.  After a bit I stop to catch my breath and give us each one sip of the rationed water.  I look down and notice in the distance the man has stopped and is watching us with his binoculars.  He must have thought we had both lost our minds!

As we trudged along I did begin to worry.  This trail was going on forever, our water was almost gone, it was getting hot, we were exhausted and I thought...will we die here?

Just when it seemed like we might actually be in danger I spotted two trail heads at the top of YET ANOTHER HILL!  YES!  I really pushed up that hill, wanting to see, were we on the right trail?  If it was the #4 motorcycle trail....I actually think I may have cried.

EUREKA!  It was where we were supposed to be!  We had two choices, 3 bears or Watchman.  The original plan had been to do Watchman back and out which would have been anoth 3-4 miles.  Or we could take 3 bears which would be another 1 or so.  What would you have done? 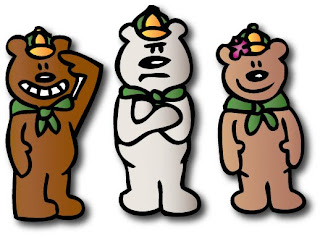 At this point our knees and ankles were destroyed.  Nearly every step hurt.  But we pushed and we ran...just to be done.  The trail came out onto Rocky Canyon.  I have never been so happy to see that wretched road in my life!  We made it with less than an ounce of water to spare!  And waiting for us in the car........................

And so, that is the adventure on trails for us this week.  Much more than we bargained for.
After getting home and eating and rehydrating we both found that we had lost about 4 pounds.  Yikes! But we did learn some very important things.  First, when mapping out trail runs, look at the elevation gains and loses!  And secondly and every more important.......

If you are gonna be crazy,
don't be crazy alone!
Posted by Jodi at 4:15 PM