Thanks again to the Pulse Running and Fitness shop in Meridian for another great trail idea!  This month it is Polecat.  Michele and I had the Bossy Bandit with us again.  We also convinced my son SPEEDY to join us again, but sadly his friend couldn't take running with us again...haha go figure!

Polecat is actually much closer to where I live than most other trails. Directions to the trail head: from State St., north on Pierce Park, continuing on Pierce Park through the Hill Rd intersection and past the T intersection with Cartwright, the trail head parking is on the right hand side of the road.  It is a 6 mile loop that you can run either way.  We chose to run it left (clockwise).

Before we headed out I noticed GASP! I forgot to charge my Garmin!  I only had 1 percent charge left.  No good!  I had no idea if it would last 6 miles!  Michele put her cell phone in her hydration pack and put in on Map My Run.  If I didn't have a recording of my run, I'd have no digital entry for the Pulse's Awesome Prize of new trail shoes!

Hunter took off and was gone from our sight INSTANTLY! As we lumbered our way up a hill, two ladies came bounding down.  They informed us that we were going the direction that was harder and should turn around.  GREAT!  We hollered to Hunter (whom we couldn't even see) to get him to turn around.  No response, too late, we were committed.  We had to follow Hunter since he almost took a 20 mile detour last time he ran the trails with us. 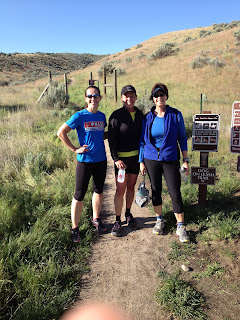 Kris lovingly suggested that we turn around, head the other way, and then pass him eventually to really mess with his head.  Michele and I ignored her.

The trail started out with a lot of climbing, but not too bad.  I was worried about how far in front of us Hunter was getting.  I may be a runner, but I am still a MOM!  There were spurs and such that he could mistakenly take and who knows where he'd end up!  Also, I was super concerned about my watch dying!  I do not like it when I don't get a record of my runs!  So, I decided do forgo my usually enjoyable leisurely trail run with my sister and bossy and kick up the pace.

At about 2.5 miles in I came to a fork in the trail.  I knew I needed to go right.  Who do I see running towards me FROM THE LEFT?  Hunter!  He DID go the wrong way!  Good thing I sped ahead.  I was able to see him for those few moments and then ZOOM! gone again.

Meanwhile, Michele and Kris are coming down to the same fork that Hunter and I were just at.  Michele hears strange voices.  She panics and starts looking around.  Then she realizes...her iPhone is talking h=to her, telling her the mileage she is at.  Hilarious! Genius!

Normally Michele will run in front of Kris.  But today, Michele let Kris lead.  She decided that she liked this alot because, "If there is a snake or a badger on the trail, I have time to turn around and go the other way!"  Haha poor Kris.

The trail was fun, I really enjoyed it.  Hunter liked Watchman better.  Michele liked them both and I didn't ask Kris :) 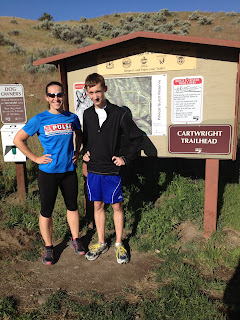 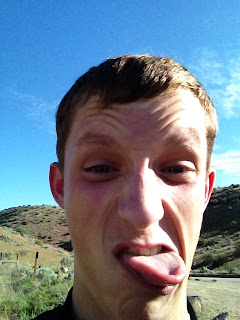 On the drive home I was asking what funny things I could add to the blog about the run.  Hunter said the funniest thing was having to wait so long for Michele and Kris to finish (he waited about 10 minutes).  Kris replied, "Well, you went the wrong way so you are dumb."  What a great trail running group I have!  Feel the love!  Now you know why Hunter's friend didn't want to run with us again.

Email ThisBlogThis!Share to TwitterShare to FacebookShare to Pinterest
Labels: Polecat