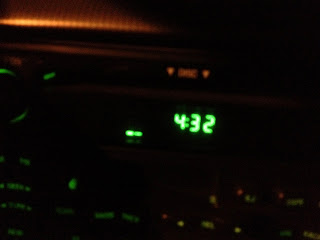 Yes this is correct.  The clock in Kris's car read 4:32 AM!  And yes, we are in the car headed to the Boise Foothills.  Why?  You may ask?  Are we stupid?  Are we crazy?  Do we need our heads examined?  Do we think up outrageously weird things and ideas?

The simple answer to all of these questions is a resounding YES!  We ARE all of these things and we LOVE IT!!

So I cannot remember when the idea started or who first brought it up, but needless to say the idea was hatched a week or so ago.  On our Horseshoe Bend run it was finalized and we were ALL IN!  Since I live further away I left my house at 4:00 AM in order to make it for the pre-determined 4:30 AM departure.  This is Tuesday.  Just plain old Tuesday.  Not the Tuesday that is after Monday or the Tuesday going in to Wednesday.  Just Tuesday. (see previous post).

It was also decided to run early in the AM instead of late at night because creepers stay up late but they do not wake up early in the morning.

We decided to run a trail that we had ran before so we would not get lost or hurt in the dark.  I became worried as we drove there because we were driving on a road that we have driven before and KRIS GOT LOST!  Well, not technically LOST.  She knew where she was, just that it wasn't where we were supposed to go!  How were we going to survive a night RUN if we had already failed on the night DRIVE to get there?!

We were new to this whole night running thing.  So we wanted to be sure we could see where we were going first off.  The secondly we wanted to make sure everything could see us as well.  First, everyone strapped on their pepper spray.  We all wore headlamps, though it was unanimous that Michele's was the best.  Then I brought some glow sticks.  Michele and I each wore glow stick bracelets, I made a necklace and clipped a bunch into my ponytail so they could see me from behind.  Kris, wow she was a glow!  Blinking LED bracelets, a blinking LED bling ring, arm band, headlamp, flashlight. We told her that she didn't need the reflective vest.

Michele made a "genius" comment as we were getting all decked out in our "glow"!  She wanted to know if the glow sticks would mess up her Garmin Satellite reception. Really?  Oh my.  I don't believe either of us really answered that one!﻿

To start with, not only was it dark, but it was dusty and smoky.  That made it even darker!  Even with the headlamps it was still difficult to see.  You had to really focus on the path.  We parked at the upper parking lot from camel's back on 8th street before the Interpretative Center.  From there we ran on Owls' Roost # 37.  Running a trail in the dark is a completely new experience.  It seemed as if we were on a trail that we had never ran before.  Everything seems different when you can only see a few feet in front of you!

From Owl's Roost we passed the Foothills learning Center and then went up Kestral #39A all the way up to Crestline #28.  A really difficult part of running in the dark is that you do not realized when you are coming to a hill or even when you are on a hill until you legs start to tell you.  We were trying to communicate as best we could to make it easy.  Whoever was running in front would call things out, "rock!"  "mogul!"  "Hole!"  Sometimes it didn't help though.  Kris was leading, called out "Hole!"  I watched her stumbled on it, watched Michele hit it, then I just crashed through it and rolled my ankle!  As I felt that stinger run up my leg I recalled what my husband had said to me last night. "You guys are so stupid.  You have a marathon in a few days and you are going to go trail running in the dark.  One of you is gonna twist an ankle."  ding-ding!  He was right!

The view of the city was pretty but it was diminished by the haze and smoke.  This is the best picture that we could get. 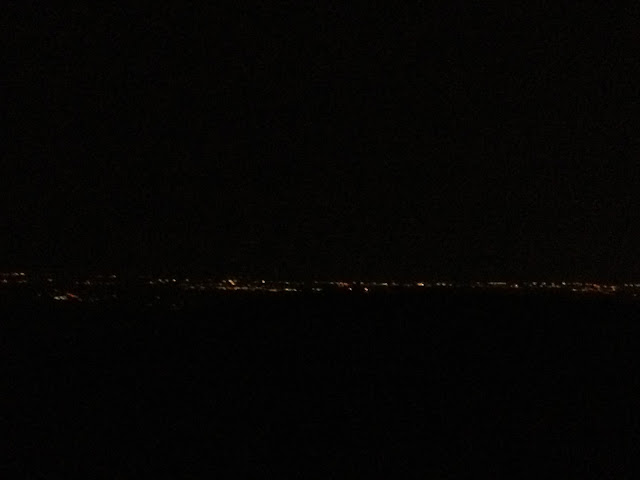 Are run was VERY slow going.  Sometimes we just had to walk because either A. it was to dangerous to run a section blindly o B. we j=were just laughing too hard!

At mile 3 I noticed that when my head was way down it was easier to see the trail.  Hmm....I wonder.  I started fidgeting with my headlamp and realized that it was adjustable!  Oh man the difference was amazing!  It only took me a little over a half hour to figure THAT out!  Kris found it so funny that she lost the ability to speak and even walk.  At this point I almost dd wet my running capris from laughing so hard!

We stayed on Crestline a bit and then headed back down Red Cliffs Trail #39.  Kris reminded me that this was the trail on which she saved my life on our last very long trail run.  Yes, it is true. She did!  I was dehydrated with no more water.  Hooray for Kris' Gatorade!

I ran by Kris for a while and Michele led again.  She was wearing blinking bracelets and a blinking ring! Suddenly I yelled, "I can't run by you, It's going to give me seizures!"  this caused another interruption in the running by uncontrollable laughter.   I do think we laughed more than we ran today.


We hit the road, 8th Street Extension, to run back to the car.  Now we had an even-ish surface and could run side by side instead of single file.  That made it a lot easier.  I thought it would be an uneventful run with no animal encounters until.................

MOUSE!  That's right.  Our fearless running partner just about lost it when she thought there was a mouse on the trail.

I am embarrassed to say that it took us 56 minutes to run 4 miles.  But then I realize, this was one of our funnest runs ever.  It's not about the mileage, the pace, the rime, or even the trail we take.  It is about the company, the memory, and the laughter.  And in that case....this run was a PR!