One Hill of a run!

Well, our next marathon is a week away!  Today we ran 9.75 (it is a taper week after all!).  We decided to run part of the upcoming Race2theSummit half marathon that we will run in September.  I know it is not technically a trail run but...close enough!

We me at the Home Depot at 6:20 AM.  Then Kris drove us in to Horseshoe bend.  As we were driving Michele saw an animal crossing the road and yelled pointing, "What is that?"  "Um, it's a DOG."  Michele thinks Horseshoe Bend may be a little bit more isolated than it really is.

Since there are NO porta pottys around, we had to use the local Chevron.  Must cleaner and smells a lot nicer too!  Michele and Kris decided to GU before we started the run.  Kris has a new type of GU.  It's called "Ewwwwwwww!" And it involves her finger and her nose! 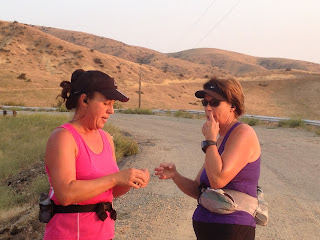 ﻿
Ha ha just kidding.  They had some berry, chocolate, minty, vanilla GU or something.  I tried it once, made me gag and nearly vomit.

We didn't know what to expect on this run.  We parked just off of Old Highway 55 and ran all the way to the top where the road meets with the new Highway 55.  It turned out to be almost 5 miles.  The climb was steady, but not terrible.  I must say we really did enjoy ourselves, as we ALWAYS do when we run together.

It was chilly when we started.  Michele thought it would be warmer because of all the fires.  What?  We really harassed her about that one.  If you run where there was a wildfire 5 weeks ago, it is not going to be warmer!!  I guess that's what we get for making her leave her house at 6:00 AM.

We saw some REAL wildlife (other than the previous mentioned dog).  There were 7 deer that loped by.  What was cool was about 45 minutes later we saw the deer again.   I only got a grainy picture of one of the deer. 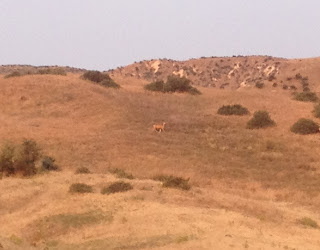 There was A LOT of cow manure in one section.  Every time we saw it we would yell POOP! For Kris' benefit.  Kicking dry horse poop is funny.  Kicking wet cow manure, not funny.  We were being extra helpful.  As it turned out some fencing was broken and there were calves everywhere.  One of them ran just ahead of us along the side of the road for awhile until it finally got the nerve to bolt across the road in front of us.  I did not capture this on camera because #1 I was in a good running groove and didn't want to stop and #2 everyone has seen cows. 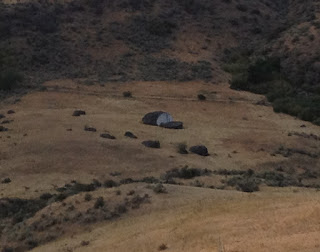 One fun thing to see on the run was Bread Loaf Rock.  It actually looks  just like a loaf of bread!  I searched the web trying to find out how it got to be that way and had NO LUCK.  So if anyone knows, please let us know!!

As we ran through the portion that had been burnt by the wildfire a little over a month ago Kris announced, "Whew, it's getting warmer up here!"  Haha Michele.  When you run with us, we never forget it when you make a dumb comment.  Kris is still reminding me of one I made 6 months ago!

We felt good running.  Kris is a tad slower on the uphill.  But today we learned that she really isn't.  "I could run ahead of you both!"  she announced from behind us. "But, I choose not too!  I run back here to protect you both!"  Hmm...not exactly sure how that works.

Running this hill today was great.  I seemed to get skinnier with every step.  I had to re-adjust my hydration belt several times.  My running partners would say otherwise, but I think it's the weight loss!

We reached the top Spring Valley Summit.  It was a very pleasant and do-able climb!  We all are now even more excited for the race!  I decided to take some pictures.  Kris announced that she was going to be in everyone of the photos!  She wasn't kidding! 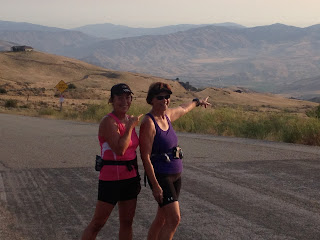 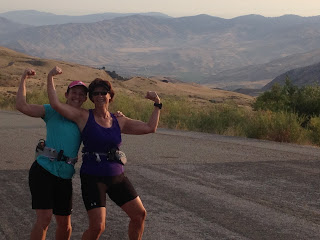 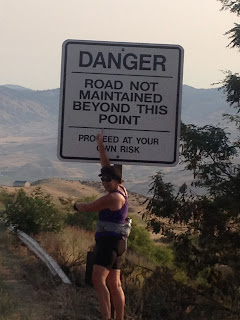 The run down was very nice.  An easy downhill.  We saw a couple of hawks, but not the deer again.  So we started to plan out our next run.  We want to do a night time trail run.  We plan on running with head lamps.  Sounds fun right?  No sounds crazy!  So we were basically deciding on what time to leave.  Kris wanted to run after 10:00 PM.  But I felt that there would be creepers out.  I reasoned that creepers stay out late, they don't get up early.  So, Kris was immediately out-voted.  Michele of course chooses 6:00 AM.  Why go on a run with head lamps if it is already getting light out?  So after a lot of negotiating and pressuring her, we finally convinced her that we would leave her house at 4:30 AM. Tuesday morning at 4:30 AM.  Silence for a minute, then Kris says, "  Now is that the Tuesday from Monday, or the the Tuesday going to Wednesday?"  The laughter from Michele and I that ensued at that point was so intense we could neither breathe or run.  We were so taken back by her obscure and nonsense question that neither of us could respond right away.  I finally said, "It's just Tuesday!  Tuesday morning at 4:30 AM."  What is even funnier is that it took her a few times of us saying that before she understood!  Then when she did she tried to shove me down on the road and Michele into a bush because we couldn't stop laughing.  I will be sure to remind Kris of this comment on EVERY RUN for the next 5 MONTHS, at least!

There was an awfully lot of silliness from Michele and Kris today.  I seemed to be the only one who could keep my wits about me.  Michele thought the red smeared stuff all over the road was the remnants of an animal slaughter. I realized it was fire retardant from the previously discussed fires.  When she pointed it out to Kris on the way down she called it RETARD....ent.  Then they giggled and laughed.  Then the pointed out that it had missed the fire completely.  Their behavior started to get me wondering... what is the expiration date on those GU's?﻿
Posted by Jodi at 4:05 PM