The taper birthday trail run that was NEITHER a taper NOR a birthday run!

So, I am now 38 years old.  Yesterday was my birthday.  We were SUPPOSED to run yesterday in celebration of the fabulous day, but the air quality is so poor that we had to postpone.  See this summer is the summer of burning.  There are wildfires all around us!  Colorado, Oregon, and a bunch in Idaho.  The wind blew all of this smoke in and it settled into the valley.  Long story short (too late) the air quality here has been ORANGE. That is bad.  Michele said when she ran a couple of days ago she got home smelling like a campfire.

You may wonder WHY I included so much about the fires and air quality.  Michele told me to because it is HISTORY!  So I did. 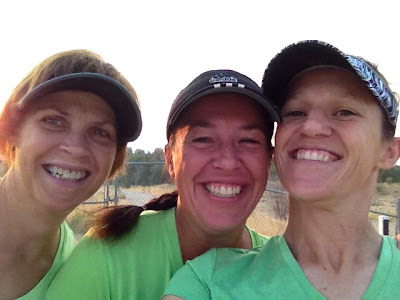 Now, to our run.  First off, happy day to be on the trails again.  We always forget how much we LOVE the trails, until we run them.  Then we wonder why we ever run on the roads!  We are trying to check off more trails from the list in order to accomplish our New Year's goal of running them all. Michele noticed that we have A LOT to do.  So today we tackled 7 of them!  Before you get too impressed, they were all easy short ones! :)

We parked at the porta potty by the dog park and archery range near Fort Boise Park.  This is an important first stop when we run trails. AS we were just getting started Kris shouted, "WAIT!" Then she and Michele broke in to a lovely rendition of 'Happy Birthday'. It was lovely. 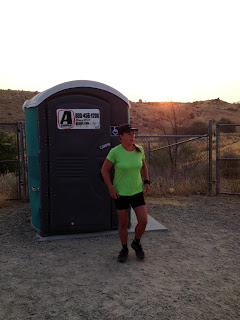 ***Quick disclaimer here:  You will notice lots of pictures again.  I finally got a new phone.  And not just any phone...an i-phone 4S.  So the blogs will be full of photos once again!***

The trail that runs through right from there is called The Ponds Loop #21.  We looked very hard and saw no pond.  Not sure how it got that name.  But it is short, flat, and uneventful.  Why is it then when we were only .1 miles into the run I hear from behind me, "My leg hurts!"  Come on Michele, we just started!  Then a few minutes later Kris chimes in with, "My knee hurts."  I don't know if anything was hurting on me at that point or not, but I wasn't going to say it out loud.  We would have sounded like a bunch of old ladies trying to run.

We turned onto trail #25, Eagle Ridge Trail.  This was quite a climb.  I must confess, we all did end up walking a bit.  However, no matter how high we climbed today we knew that we would be safe.  Michele wore her new survivor bracelet!  She guaranteed us she would save our lives with it if necessary.  It would turn into a rope that she could pull us to safety.  Oh boy.

From Eagle Ridge we turned onto #27 Cottonwood creek.  This was a cool trail.  It was one of those trails that could have been used in a horror movie.  Lots f overhanging trees and narrow.  I was running in front when up ahead I saw an ENORMOUS pile of scat (aka POOP).  I yelled out the alarm, "Poop ahead, big pile!"  Then I leaped over it.  It was created by a horse, so that tells you how large the pile was.  Michele called out the same alarm, "Poop ahead, big pile."  Then she leaped over it.  Kris?  Kris just ran right through it, kicking it everywhere!  I am not kidding, she really did.

Michele and I had been on this trail once before in a freak hail/snow storm.  This time it was much more pleasant.

We came down to trail #22C Mountain Cove.  This is always a better option to run this trail as opposed to the road.  Because, we all hate that road!  After a very short run on this trail we turned left, crossed the road, and got on to Elephant Rock Loop # 23A.  We had never been on this trail before (well Kris said she had and that it was hard).  Turns out if you stay left and go clockwise, it is a very nice loop, really short though only .6 miles.  It has a cool rock at the top.  It looks like an....... 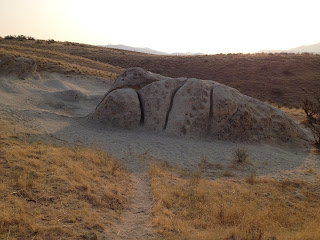 Kris and I got close to it and made our best impression of an elephant. 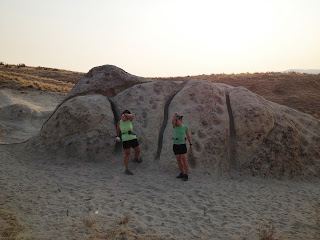 I started to climb up the rock. About half way I realized, "How am I going to get down."  "Don't worry," called Michele, "I have my bracelet if you get stuck."  Luckily, we didn't need it!  The wonderful Kris helped me down, without a bracelet! 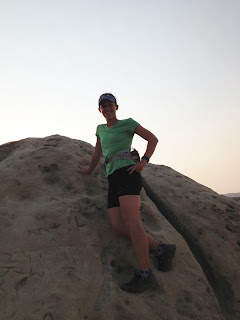 After we finished Elephant Rock Loop we realized our run was not going to be long enough if we headed back from here.  So we extended it.  We are all geniuses!  We got back onto 22C and went left instead of right.  We stayed on this until we hit 22A which are a series of Central Ridge Spurs.  Then a left onto 22 and TA-DA!  We are to #20, Ridge crest.  Kris calls this a side-winder, I call it the windy downhill, and I don't know what Michele calls it, but it is Ridge crest.  It is the perfect section to let loose and run downhill FAST!  Kris and I love this trail, Michele hates it.  She doesn't like the downhills as much as we do.  As I tore it up down the hill I heard her yell, "This is a taper run!"

See we have our marathon next weekend and the next two weeks are supposed to be taper weeks.  But I ask you. Who can resist going blazing fast on a downhill full of switch backs? Not me!

After we got to the bottom of Ridge crest we headed left on #27 Cottonwood Creek.  We then were on the same trail we started on.  We passed the kicked up horse poop again.  And this time it stunk because SOMEONE had kicked it!  I am happy to say this time Kris avoided it!  At this point in the run, through the horror movie trees, we all nearly got killed by the same biker!  The weird part is that we were pretty spread out too!  She was a biker on a mission and the mission was to get everyone else off the trails but her.  She nearly succeeded too!

Instead of backtracking the entire way again, we went up a steep set of stairs. It was part of #25 Eagle Ridge Trail.  Kris started sprinting up them like Rocky, but I made her stop for a picture so she "Lost her Momentum!" 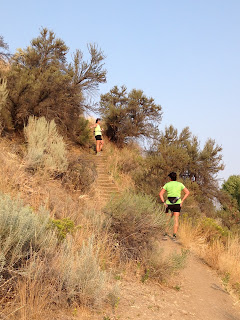 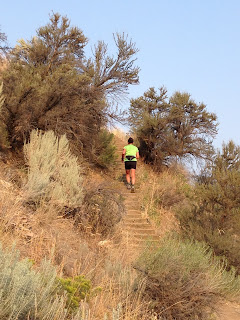 At the top of the stairs we headed left on 25A just to see at the "look out".  Kris would be upset if I failed to mention that she made it to the look out FIRST!  After we looked out and pointed out which trails we recognized I pointed to the very top of the mountains and said, "And there is where 5-mile gulch ends!"  If you fail to see the humor in that, you need to read the Neanderthal post.  We headed back on #25A the other direction until it met up with #25 and now we were going out the exact way we had started ending on #21 Ponds Loop.

It was a GREAT run today!  The air started to bug us about half way into the run, but only while we were climbing.  Kris said it was probably equivalent to smoking a couple packs of cigarettes.  Great comparison.  Michele felt like she got "extra sweaty" today.  Here she is feeling extra sweaty. 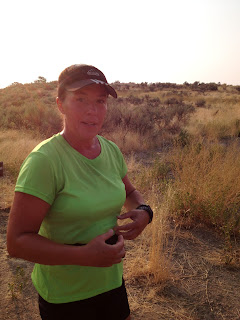 After such a great run we always learn so much about ourselves.  This time, Michele learned the she must be "Firm in her convictions!"  A good lesson to follow, Michele. Way to go!  But then later on that same day, we over ruled her desire to start on next trail run at 6:30.  We voted 6:00, overruled her, and won. Maybe next time.
Posted by Jodi at 9:40 PM