So, today we are resuming our weekly trail runs.  We have the 2012 goal to run all of the trails on our Ridge to River Trail map.  So the clock is ticking and we really need to get things done!  We have 9 systems left to do!

Today we decided to run ALL of the trails in the Table Rock area.  Sometimes I wish I had an alarm that would go off very loudly whenever I am about to make a stupid decision.  Then it could warn me with enough time to alter my plans.  But since I have no such alarm, we headed off to table rock this morning. 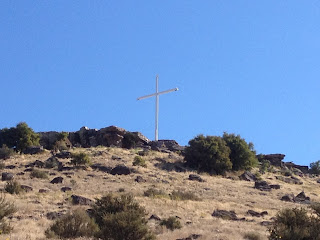 It started off all weird.  First we headed off on the trail #16 Table Rock Loop.  After just over a half mile the trail vanished.  We had sheer rock drop offs on our sides.  We could see a trail head down below us, but could find no way down to it!  So we back tracked to the car to look at the map again.  Yep, the map said to go the way we went, but there was no trail.  Our only option was to go through the gate with a giant warning: FEDERAL PROPERTY. NO TRESPASSING!  "Feel like being arrested today?"  Apparently we did because we went on through. 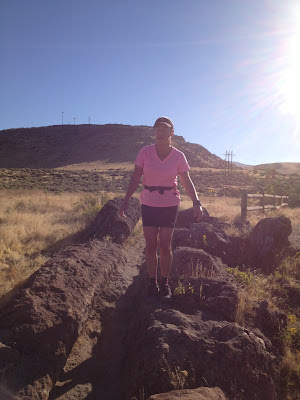 We found a round about way to cut through this area and find the trail markers.  As we went along we came to a fork.  My directions that I had written on a tiny piece of paper said to head left.  The trail marker did not specify what was left though.  It looked like a trail.  Michele said, "This is not the trail."  But I said "Sure it is."  And we went LEFT.

I cannot give you a detailed list of the trails that we did and the order that we did them in.  We were looping here and there, going back and forth, running everywhere.  I use the term run loosely though, we did a major amount of walking.  These trails weer narrow, rutted, rocky, hilly, and NOT FOR RUNNERS!

See the surface Michele is standing on?  That is what we ran on! There were even warning signs! 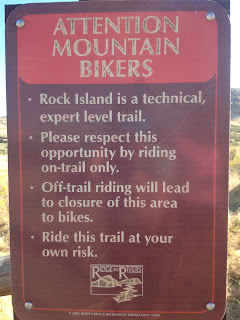 So "RIDE" at your won risk is a nice way of saying "Hey Dummy don't run this!"  But we did and we had fun despite the technical footing. 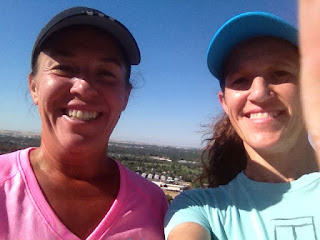 I think we stopped at least three times so I could draw what our route was supposed to be in the dirt.  I could visualize the map in my head, but was not seeming to translate that to the actual run.  It is interesting to note that we saw only ONE other runner!  We did see about 50 walkers/hikers though.  Hmmmm what does that tell you about these trails? 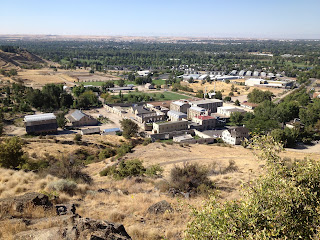 We ran above the Old Prison and then slowly made our way back up to the cross where we had parked.  A long day, a long run.  What can I say about it?  I can't say I really liked it.  I can't say I would recommend others to run it.  I CAN say, I will not run it again!