I'm so glad that Michele watches Channel 7 news every night.  If she didn't, we may not have found out about this race!

But since she DID watch the news, we knew about it right away!  It was for a great cause (to raise money for the small town of Horseshoe Bend's schools).   We signed up and started training for another Robie style run.  Uphill to a summit, then down to a finish line!
Click here to find out more about the race!


Michele had of course just returned from a vacation and had not run in several days and Kris had a terrible head cold!  What a pair those two were.  I was in the mood to really race this one!  I needed to redeem myself after the cursed Robie Creek run.  Kris said she would stay with Michele.  Here is how our conversation went:

We met at the Home Depot parking lot and then drove in to Horseshoe Bend.  Between Michele complaining how out of shape she was and Kris complaining that she couldn't breathe out her nose I felt like I was in a doctor's office.  These two were hilarious!  The race start was chilling but luckily stocked with LOTS of porta Johns! 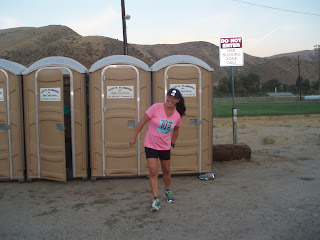 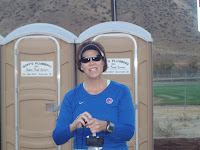 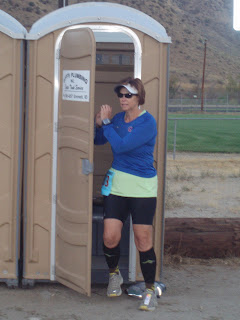 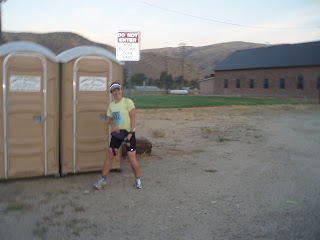 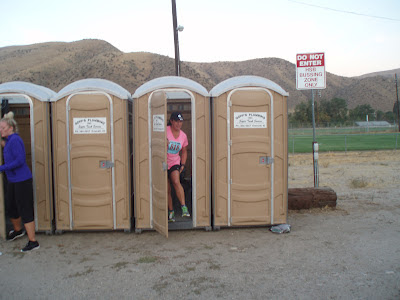 Then Michele says, "STOP WITH THE PICTURES!" 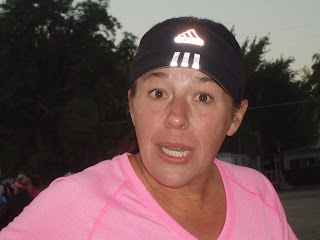 
SO, since Michele and Kris were running this race for "fun", that would leave one to ask, what was Jodi running it for? TO RACE!!
I have recently had a friend start training me for the nest year's Great Potato Marathon.  We set a goal to run it under 4 hours (that may be a foolish goal).  So, after working with him the week of this race I was PUMPED to run!  I was grateful that Michele and Kris had each other so I could really push it!!
So, when the race started I did just that, I pushed!  This blog will include 2 versions of the Half- Marathon; mine and the dynamic duos.
Jodi's Experience:
I took off fast but tried to reign it in a little.  I have been burned many times taking off too quickly!  The weather was perfect!  It was a chilly start, which I like.  I tried to not look at my watch for what pace I was going and to instead just run what felt good.  After about the first mile the road turned and we started the incline.  From here it was 6 miles at a steady climb.  I felt okay, well actually I felt GOOD!  I even had a guy compliment me on my socks!
After climbing for about 3.5 miles, I started to get tired.  I started to question whether or not I could keep up this pace I had set for myself.  This is when the training I had received a few days prior helped.  Kyle (my trainer) had me run the fastest mile that I could on the track.  He ran it with me and when I started to feel like quitting he talked to me about things to do.  One of those was to forget about everything but my stride.  "Just focus on your stride."  So I did that, when I began to feel like walking, I simply focused on my stride.  And it worked!
After another mile of running a great thing happened.  It turned out that two of my friends were running a water station.  How wonderful to round the bend and hear people cheering your name!  It was a great shot in the arm to keep my going and a wonderful surprise!
THE SUMMIT﻿ 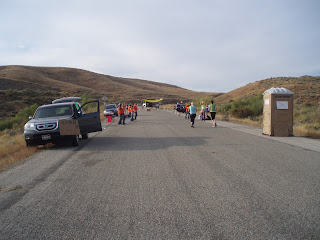 This picture was taken by Kris.  The Yellow banner is the turn around point.  Reaching the summit was so rewarding! Because I now knew it was all downhill and I am a good downhill racer!  So I took off and really started to open it up!  I knew eventually I would get a chance to see Michele and Kris as they were going up and I did! 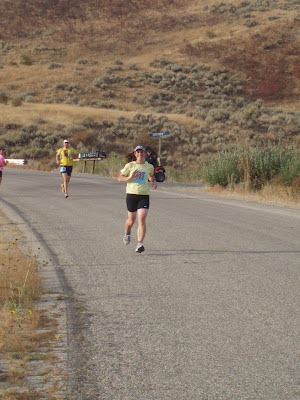 As I passed Michele, she did exactly what she had promised NOT to do!  "Jodi, you are the 11th female Now GO!"  She has done this to me before, but last time she MIS-counted!  Today she was spot on.  How do I know.  Truth be told I had counted too!

So, since I love to run downhill and I cold see three ladies in front of me, I decided to go get 'em!  I ended up averaging a 7:25 minute mile pace on the remainder of the race and passed those 3 ladies.  Unfortunately there were no more ladies to be seen. 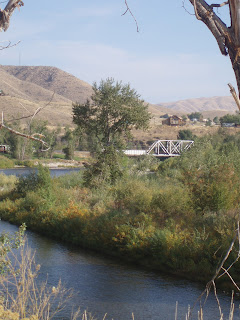 At the end of the race (which ended up being 13.7 miles!!!)  we had to cross a bridge.  This bridge was about  15 yards long.  Not a big deal EXCEPT.....THE ENTIRE BRIDGE WAS A CATTLE GUARD!  As I approached the bridge a guy standing there yelled, "Fast Quick feet!  Don't slow down."  So, I assumed he was talking to me so I did just that.  I made it across without really slowing down!  I even passed a guy on it! 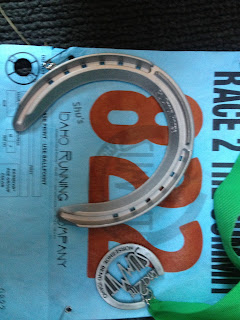 Not bad for a run in Horseshoe Bend!

﻿﻿Michele and Kris took off laughing, sore and unable to breathe through their nose.  Their main focus was to just get up the mountain (and be able to breathe while doing it).  Although the race start was chilly, Kris reminded Michele that it would get hot soon.  Michele didn't catch the joke and started to comment about the sun rising an it is a good thing they are almost to the top.  It wasn't until Kris laughed and reminded Michele about our training run on the road that Michele realized what Kris meant. Ha ha!
﻿
They stopped on the way up to see the donkeys (something I NEVER saw).  The fence was down and Michele said, "Why don't they come out?"  Kris replied,"Because they can't figure out why a bunch of dumb people are running up hill when they don't have too. They are dumbfounded." 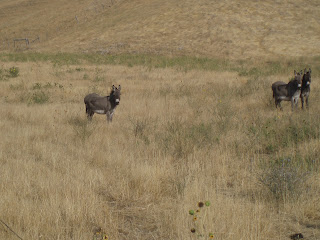 Michele and Kris also came upon the water station being run by ourfFriends Holly and Brian.  They stopped and chatted for a couple of minutes with them.  She asked if they had seen me and really took their time.  They began to run again and Kris said she felt like they were finally getting their momentum she HAD to stop to take a picture of some "elite" runner who came barreling down the hill.  Isn't she nice?  I am so grateful for the pictures too!  Otherwise Kris would have had a faster time had she not stopped. 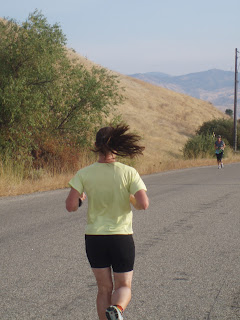 This race was also another case of Kris to the rescue of the distressed and dehydrated!  A pregnant lady was passing out.  They stopped and Kris gave the lady her last goo.  What a girl scout!

Near the finish line I took the camera and ran ahead so we could have some nice pictures of the Dynamic Duo finishing in all their glory! 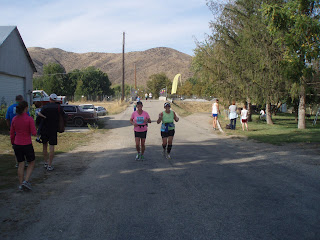 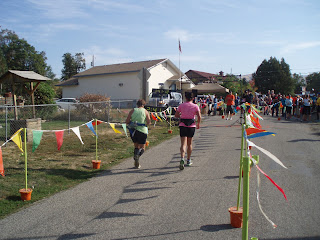 I am not allowed to post their finish time.  So, I will instead say, they did great and they had fun!

It was perfect weather for the race and a nice course to boot. 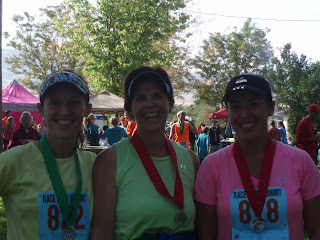