I'll run with you...IF I can find you in this CEMETERY!

Today's run consisted of two different trail systems.  The idea was to park at the Veteran's Trail Head (by the Veteran's Cemetery off Hill Road).  I was parked on the canal access road, because I couldn't see the trail head parking.  I thought it weird that I had beaten Michele there.  So I called her.
"Where are you?"
"I am at the Cemetery."
"What part?"
"The part off Horseshoe Bend."
"That's the wrong part."
"Where are you?"
"At the bottom."
"I haven't seen any trail heads."
"Are you driving in the cemetery now?"
"Yes."
"Do you think the trail head is IN the cemetery?"
"I don't know I'm looking."
"Okay, here I come too."
So, I started my car and headed in to the cemetery, looking for the trail head AND my sister.  We are still on the phone.
"Okay," I said, "I am looking for you."
"I don't see you yet."
"There is no way we are running through a cemetery today."
"This is weird."
"Oh there you are!  Do you see me?"
"Yes!  Why are you driving on the wrong side of the road?"
"I didn't know that cemeteries had a right side of the road."
"Dork."
"Okay let's get out of here."

As we headed back to the canal road where I had parked we saw a sign that read Veteran's Trail!  Hooray.  Little did we know THEN that we could have driven down that road and that is where the trail head parking was.  Oh well.  The canal bank served us just fine.

It was consensus that we both had to use the bathroom.  I was getting my water out of my car and turned around to find Michele gone.  The canal was noisy and I couldn't hear her when I yelled, "Where are you?"  No answer.  "Michele?  Where did you go?"  Still no answer.  I stepped away from the canal a bit and tried one more time, "MICHELE???"  I heard her frustrated reply, "I'm in the weeds!"

From here we ran along the old Hill road to avoid traffic.  We then turned left on Seaman's Gulch Road to the trail head that's on the right side of the road. In this system there is a loop of trails that you can do several directions. 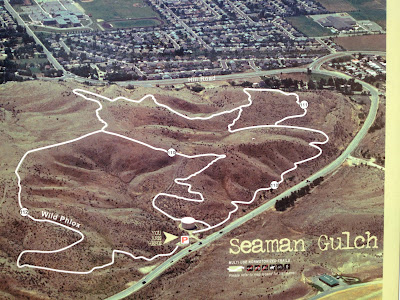 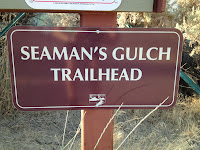 So the way we went was the following:
Start to the right of the water tower and then turn left at the tower which is part of  #110 Seaman's Gulch Trail.  This trail was very steep and quite the climb!  On the trail post someone had placed an inhaler.   Next we went Left onto #112 Wild Phlox.  This looped us back to the water tower.  This time we headed straight at the water tower on the other section of #110.  When we reached the trail markers we went right on #111 Valley View.  This looped us back to #110.  We went left and headed back down to where we had just been.  Not shown on the map is a Public Access trail.  We headed left on this instead of going back to the water tower.  This allowed us to run all the way back to old Hill road without having to run on Seaman's Gulch Road again.  This was a happy accident that we found this public trail because running on the road was a bit unnerving! Some people can be rude on the road and not give you any space at all!

We got back on old Hill road and ran back to where the car was. This entire portion of the run turned out to be about just over 6 miles.  From here we headed down into the Veteran's Trail head parking area (that we didn't know existed before).    We then ran the systems of trails in this area.  Veteran's Trail is very sandy, some parts quite deep. The hill climbing was tough but that could also be due to the fact that we already had over 6 miles behind us.  The loop we did was as follows:
Veteran's Trail #114, Left on #113 Big Springs Loop.  Then you come to a crossing of trails, we headed left onto #116 REI Connection.  Michele said it reminded her of the Military Reserve connector.  When we reached the top of the last hill we were at the Velodrome area.  We had to run on the ridge for .15 miles to get back into the trail systems. then we went right on Rabbit Run #115. Finally we went left on #113 until it met up again with #114.  At this point we had a pretty good view of the flag at the cemetery. This was from behind it of course.  We stayed on Veteran's rail which and it took us right back to the car. 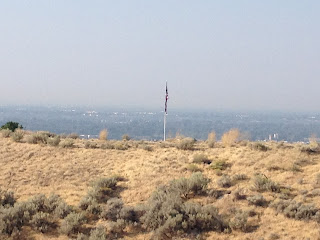 It was a great run!  A feel good, I love the Trails type of a run.  We saw a man running with a little tiny dog.  It was more like the man was running and dragging the poor dog behind him!  There were a lot of holes on Rabbit Run.  My guess is that they were badger holes.  Not a trail you would want to run at night unless your goal is a broken ankle!

THe air quality was pretty poor today.  Michele could tell and it bothered her a bit.  I told here she should've taken a puff on that inhaler we saw.  Knowing her luck it would have probably put her in convulsions....so it's best that he didn't.

This is a system of rails that we LOVED and will definitely run again.  A HUGE difference from last week!
Posted by Jodi at 1:40 PM