Through the Fog, things get clearer

Maybe it was the fog, maybe I was a little disoriented this morning.  I'm not sure the reason.  But something unexpected happened today on the trails!

There has been soooooo much rain lately that the trails are a muddy mess.  Or as Michele refers to it as, mooo-keee.  We wanted to get a trail run it but are options were VERY limited.  It was either Mountain Cove aka Les Boise or the Robie Road.  Now as much as I hate the Les Bois road it is NOTHING compared to my pure and utter abhorrence of Rocky Canyon Rd.  So the choice was quite simple...
Les Bois it is!

Kris had the day off so she joined us which always promises to make the run exciting and unpredictable.  And this time she didn't disappoint!  As I pulled up to Michele's house Kris was in the driveway posing while she sucked down her pre-run goo!  I tried to run her over but she is quite agile.

As we headed out it was extremely foggy and grew foggy as we drove.  The good thing about that was that the sun wouldn't be warming up the dirt road we were planning on running on and hopefully keep it mud free.  Kris pulled out her makeup bag as we traveled.  Not sure who needs THAT before a trail run! Ha Ha.

I had a personal story warning to share with my running mates.  It began with a disclaimer that it may be a bit TMI.  Because of that I only include the edited version here....

After the Wilson Creek Frozen run in January I found an energy drink mix in my race packet bag. 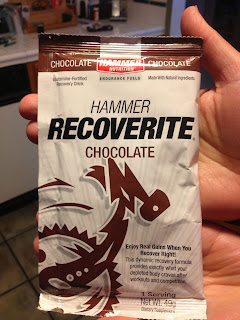 I had put it aside in my running bag.  Two days ago I did a really intense training run of killer hill repeats.  When I got home I remembered this recovery supplement.  So I followed the directions and mixed it up.  After the first taste I didn't really like it.  I'm not a fan of any chocolate drinks.  I tried another drink to see if it would get better and I still didn't like it.  So, I dumped it down.  Within less than 15 minutes I was sure glad I was home and not on a run!  If you need more info than that you'll have to ask.  That piece of the story will NOT be blogged about.  Michele and Kris both realized it was weird.  SO after our run we got out Michele's packet from her race bag. 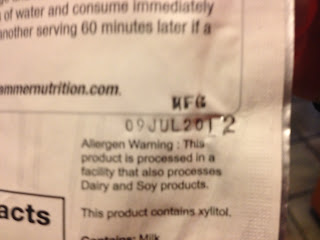 See the expiration date?  That explains IT ALL! Michele threw hers away immediately. Then we wondered.....should we tell Kris?

Back to our run!  Kris started telling us that she wanted to get a Gait Analysis done so she could run more correctly and therefore further into her years.  I told her about how The Pulse Running shop has those for free once a month.  First she yelled at us for never telling her.  Then she called us wimps for not ever doing it ourselves.

Parking the car I remembered how much I hated this road and this run.  It's uphill and then some more uphill and then a little bit more uphill.  Plus my legs were so tired!  But it was way better than Robie and still a better alternative than the paved road (but just barely better).  We told Kris that when she went to do her Gait analysis she should run really wack-a-doodle on purpose to see what the guy does.  So she started to practice.  Oh man.  Michele and I were laughing so hard we couldn't breathe and had to stop! 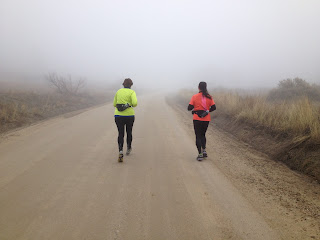 Up the road we went.  Hmmm.... this wasn't as terrible as I remembered.  Maybe it was the fog disguisung where we were headed.  It was kind of like running into the mysterious beyond or something. 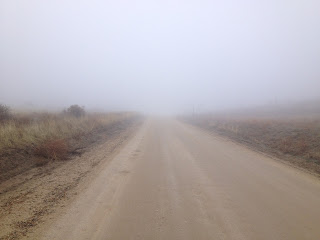 My calf really hurt and I had to stop and stretch it a couple of times so as not to ruin it!  But the hill was dare I say  a pleasant run?  I'm not sure what got in to me.  The fog?  Disoriented from my Hammer drink experience?  Who knows, but I actually liked Les Bois today.

I wasn't too bad as far as mud goes   There were a few questionable spots.  But we were careful and didn't leave any foot prints.  When we were about 5 hundredths of a mile from the top it got really muddy and Michele and I stopped while Kris trudge to the post so she could hit it first. "DING!" she yelled.  Then she did a celebratory dance.... 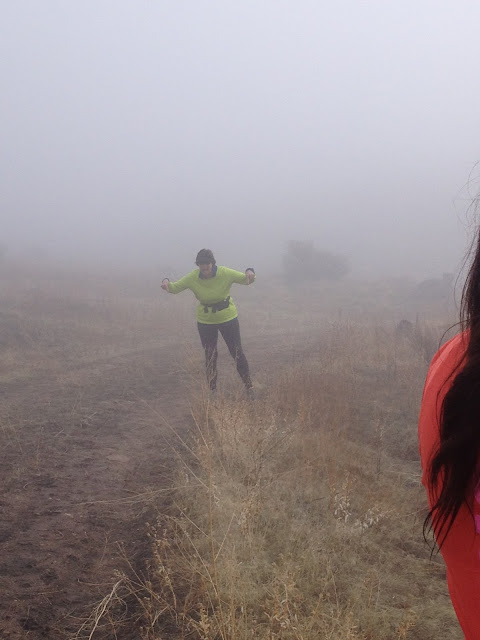 ....and yelled about how awesome she was and how un-awesome we were.  It was quite a site to behold.  But, I didn't want to tromp through the mud up there.  Let her have her glory (and super gross shoes).

And that's about how it went.  We ran up, we ran down.  No one fell. No one died.  No one had to steal anyone else's Gatorade for survival.  A nice easy going day on the trails. 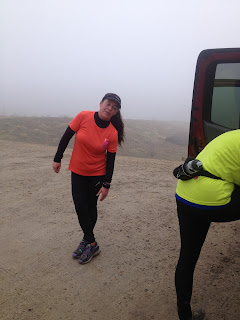 Back at the car we stretched....  Michele stretches with her eyes closed.  And yes she is probably going to kill me for including this picture!

Kris used her stick and I waited so I could use it on my calves which were still burning.  I turned to get it from her and she was rolling it across her bum!  "I don't know if I want to use a stick that's been on your butt."  I said.  "Hey," she shouted, "I have to do this! This is one f the spots that hurts!"

And this is why Kris needs a Gait Analysis. 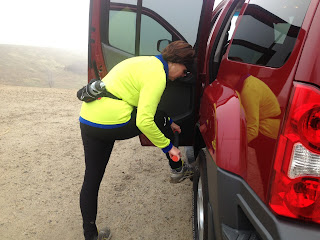 Crazy things happen out there on the trails.  You get to learn a lot about yourself and about the people you run with.  I learned that a road/trail that I hate may change with time.  But that excludes Rocky Canyon.  I learned that running without a set pace is needed at least once a week for the running to stay fun!  and while most of the time trail runs are G rated, that is never a guarantee.  There are always moments when TMI is revealed.  Out there you can be foolish and plain out dumb, and although you will be teased for no end for it, you know that you are still respected.  And most importantly,  no matter what, if you fall, we have to pause our Garmin's before we can help you up!