This is the theme I came up with for this months group themed trail run.  When I texted it to Michele and Kris a few days before the scheduled run, they both admitted they were perplexed and not sure what was going on in my head.  But after today's run was over they understood completely!!

So the first part of the theme is obvious once you get a look at us.... 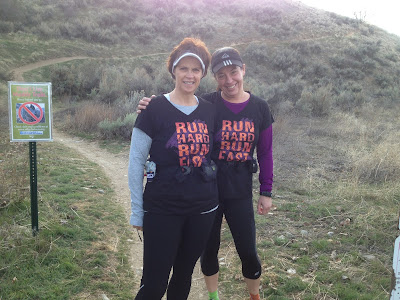 Yes, I got us all matching running shirts. It is important that you note in this picture that we are wearing long sleeved shirts underneath, that is important later on. 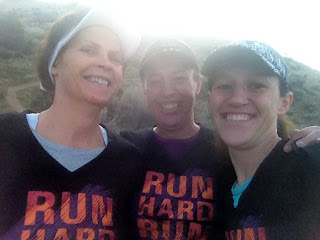 The next part of my theme has several meanings.  "Be the bunny."  First it refers to my and Kris' duel on the trails last November.  You can read about it here.  Secondly, it is obviously because Easter is in a few days!    And the third reason comes up at the very end of the run, therefore the very end of this blog entry.

The last part of the theme is pretty clever I think!  I chose our trail run to be in a system of trails at Table ROCK.  The trails that we ran all had the word Rock in them; Table ROCK loop, ROCK garden trail, ROCK island trail, Table ROCK quarry trail.  We were "Hoppin" on the rocks because every mile we switched who was leading.  Michele and Kris took my theme a bit too literal. 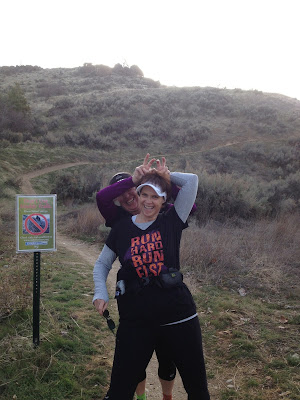 That just gives you a small glimpse of what some of our crazy trail runs can be like!!

So we started on Tram Trail which is a beastly uphill climb for quite a while!  It was me, then Michele, then Kris.  Michele was telling Kris to pretend she was riding a bicycle in high gear!  That meant take smaller steps and work your arms!  I kept thinking this is a good prep work for the bruneau beast 20K which is coming up in a couple weekends!  We walked a lot. It's a killer to start your runs with an immediate steep hill slapping you in the face!   We have a sign for walking.  You hold up both hands making a "W" with your fingers.  That's a walk for sure!! 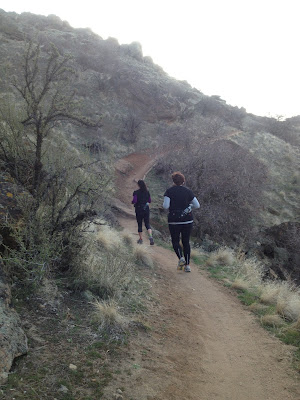 After awhile we started to get really warm. We stopped to get a drink and Kris said she was going to run out of water!  It's March 28th, 40 degrees and we are roasting!  We are those crazy girls who ran an 11 mile race that started at 1 degree below zero and LOVED it!  ( see the race report here)  Well what should we do?  There was complete consensus, those long sleeves had to come OFF!  And come off they did, right there on the trail. Hope no one is watching!!! 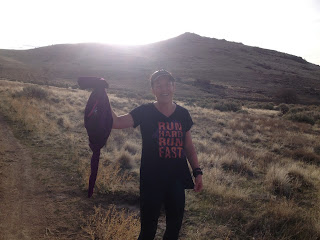 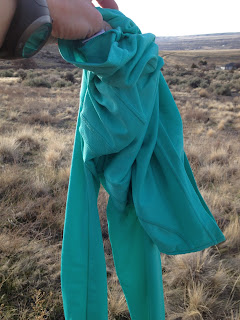 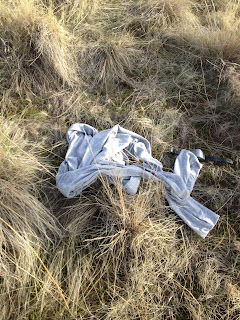 I was nice enough to take "G" rated photos of this strip show!

WOW! We felt much better!  It was so wonderful!  First mile done, time to HOP!  I went to the rear and Michele took the lead.  This was a new experience for me because I usually run in front.  I thought it would be fun for us to rotate around.  Well, I did a lot of walking during this mile.  Kris is probably yelling at her computer screen as she reads this too!  But I did.  Face it, I am younger and a tad faster.  But hey,it was uphill and the walk wasn't a terrible idea. 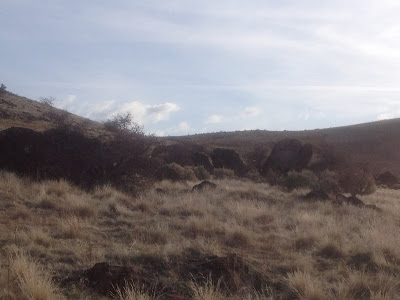 When it finally leveled out a bit we picked up the pace. HOORAY!!  I started to run again.  I had only gone a few steps when Kris started to yell at me, "Quit running so close behind me! If I fall you are going to land on top of me!"  This is funny for many reasons.  #1 Kris does fall, a lot.  #2 I was NOT that close behind her.  I was the same distance as she was from Michele. We started to banter back and forth about it.  "I can hear you right behind me!" "I'm not that close I'm just a loud breather!"  Finally, Michele had to stop because she was laughing so hard she couldn't breathe!  She said we argue like an old married couple! 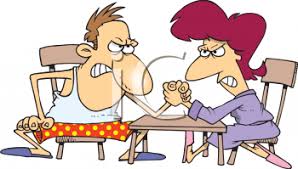 Well, that adds spice to the run. She knows we love each other!! And to prove it on the final ascent I pushed Kris from behind to make it easier! Haha!

As we headed deeper into the ROCK trails, we passed some large cliffs that had been vandalized with spray paint.  Michele commented, "Hey too bad we don't have some paint we could write our names.  But, that's almost Vandalism."
ALMOST?  I asked, It IS vandalism.  Yes, proof that sometimes on a trail run our brain cells and common sense get left behind.

The rocks and trail we ran on was so interesting and picturesque. It is the first time I had run Table Rock Quarry Trail in it's entirety.  I LOVED it.  We stopped for a bunch of photos!

We got ready to take trail 16B.  There were some bikers starting on the same trail.  Michele asked, "Are they going to let us pass?"  Because according to Michele we are now FASTER than people on bikes.  And if you wondered, NO they did not let us pass and they were long gone in a hurry.

It was now Kris' turn to lead.  She was mad because Michele got the only downhill and it was climbing up again!  Whenever she would walk I would hold up my "walking sign" with my fingers and dance.  This was mostly because Michele was now behind me so I had an audience so to speak.  Then I would just stop and let Kris get ahead of me.  I would do a countdown from 5 to 1 and then start running.  After doing this three or four times Michele shoved me in the back and yelled, JUST GO!  But hey, I didn't want to walk.

This was a great day and an even GREATER run!  The 4.75 miles took us WAY longer than anyone would guess but we had so much fun doing it.  It is so nice to get out for a run without worrying about a pace or a training goal or an upcoming race.  We ran because it was fun.
I have recently found the blog of a runner named Cory.  He always has these amazing jumping pictures.  I decided to try my own "fast Cory" leap.Not as good as his but I will work on it!! (Check out his blog photos here.) 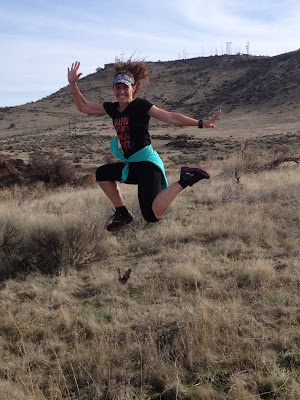 As we winded back down towards the trail head we found this little rock tower left by someone.  Michele called it a "Hoo Doo" stack that Rainbow Indians used to make.  It is quite possible that at this point she may have been dehydrated and hallucinating.  But regardless of what it was, we each added a small stone to the stack. 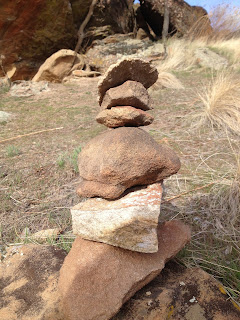 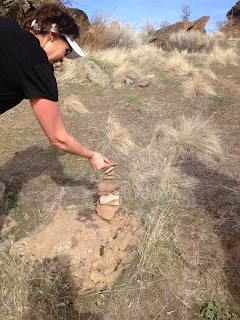 My current marathon training has gotten so intense the past few weeks that I have forgotten how FUN running was.  I am so grateful that I have these two crazy ladies around to help remind me!

And as promised the final reason that this was called....Be the Bunny.  A special peanut butter treat waiting at the car. 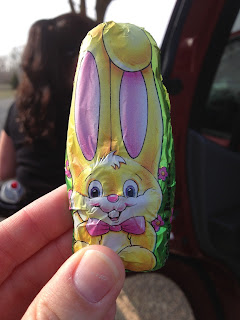 Last thought here:  Kris says she is not mean, that is just her normal.  You don't want to see her be mean! 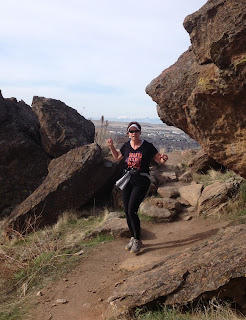