I of course was showered with gifts and various versions of "Happy Birthday" by my SOLE SISTERS.  They are so awesome!!  Running with them is truly a gift and I am grateful for them.
Michele was in charge of the 'theme' for this month's run.  I have always wanted to run to Stack Rock.   that was our destination for the day.  Her theme therefore became...
ROCK SOLID
Then she presented us with these way cool rocks! 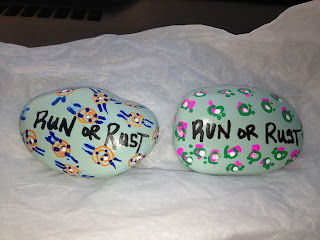 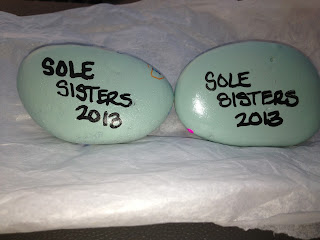 Super cool right?  We oohed and aahed over them as Michele buckled our new running partner in to his seat. 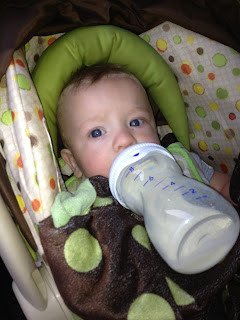 Just kidding!  This is her Grandson who we drove over for Great-Grandma to watch so that we could run.  He wouldn't make it at the mileage we were doing today.

When Michele dropped him off she got back in to the car laughing.  Apparently as Mom took him she asked if Michele had seen the sun this morning, as it was very red. "That means death, destruction and the end of the world."  So yes, a great day to run! 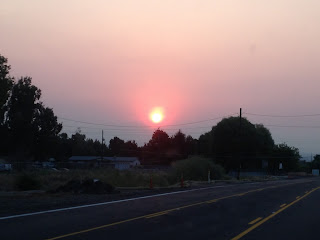 We were off!  Headed up Bogus Basin road.  This is a brand new area of trails for us.  None of us have ever been running up here.  Kris' husband Mr. Tortoise bikes up there and he said we were crazy and would just get lost.  After all this time he STILL doubts our abilities!

It was getting pretty smoky as we climbed and Michele and Kris were already planning their retreat plan.  I was determined to stick with it no matter what!  We stopped about half way up Bogus Basin road to take a picture of the view (or lack thereof) of the Boise valley below. 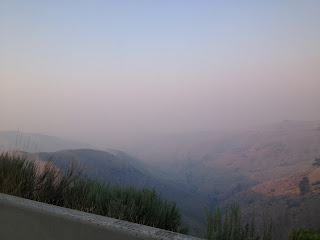 As I rolled my window back up Kris announced, "Ok now I can really smell the smoke worse! This may be a bad idea."
"Kris," I said, "My window was down!"
That was met with a smack on my shoulder and a loving "Shut your face!" comment

The higher we climbed the more the smoke cleared.  When we got to the trail start (which is not a trail head marked, just a random trail at a slow vehicle turnout)  the smoke had cleared significantly.  We were not sure if we were at the right place or not.  What do you do if you are not sure if it's the right trail?  Well you start running it of course, that's the only way to find out!! 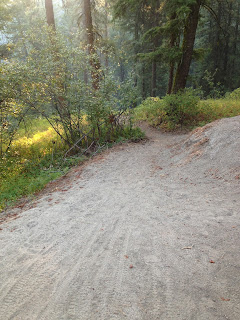 Once we realized that this WAS a trail and it was an AWESOME trail, we also realized that we were really in the forest too.  "I have no pepper spray."  I announced. "It has no more power and just spits out a tiny stream."  Michele was shocked that I had sprayed it just to test it out.  "Well, how else are you sure it will work when a wild beast is about to eat you?"  So Michele decided to test hers.  She whipped it out and started to aim and spray.  Kris and I took off in separate directions yelling "Let us move first!"  Luckily we got out the way in time and yes, her spray works.  Though after she sprayed it so much and TWICE, I'm not sure how much is left.﻿ 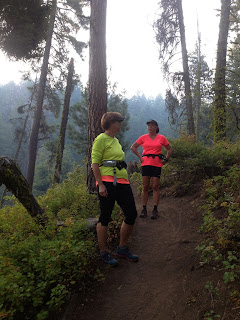 From here we started to really enjoy our run.  But then SUDDENLY we realized "wait a minute!  This is all downhill!!"
Now a novice trail runner would be excited to be running downhill, it's so much easier.  But we are NOT novice trail runners any more.  We knew a very important fact;

When you are running downhill on an out and back.....you will be going UPHILL on the back!!!  So as we flew down the hill Kris wisely yelled out, "This is going to be a Booger on the way back!!"

It soon flattened out and Kris need a bathroom break.  When she told us she also added that we were not allowed to ask why.  So of course I asked "WHY?" "Because!" was the response.  So we waited with our backs turned as I threatened to take pictures.  After that Kris was feeling too warm in her long sleeved shirt.  She took it off.  We tied it to a tree.  That way when we were coming back it would be a sign that we were on the right trail. 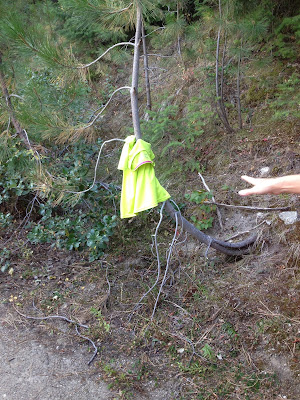 On a quick side note....Look how beautiful these trails are!! 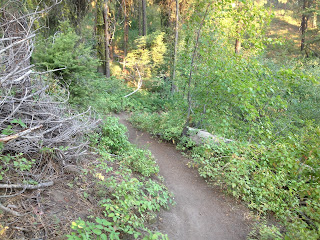 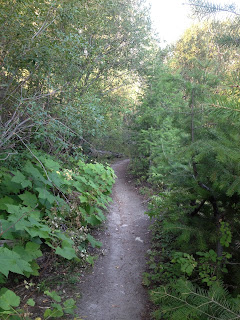 Ok, so to update our run thus far....no watch for me (still bummed about that), pepper spray works but may now be out of spray, Kris has shed a layer and announced that at every mile someone is taking off an article of clothing....WHOA!  What kind of run is this going to be anyhow?  I voted no on that idea real quick!

The trail stayed flat awhile some subtle hills and was very enjoyable UNTIL....

We came to the Stack Rock Loop.  Our trail guide book had recommended that we go left.  So, left we went.  After some time of walking so slow I felt like I wanted to CRAWL up the never ending hill of steep neverendingness.  There was a bird that was really tweeting loudly and alot.  "That bird is laughing at us," Michele growled.
This hill was SO STEEP!!  I tried to some the competitive speed walking.  You know the kind that has your hips really swinging.  It was actually easier to walk up the hill that way then to just simply trudge up it like we were.  But I wasn't going to do that the entire time, most likely I'd injure something.  So, I trudged on.  I started to wonder why Stuebner had recommended that we go left.  Did he do that to secretly kill off curious trail runners one by one so that he could have this trail loop to himself? If that was his plan, it was just about to work on three SOLE sisters!

But then FINALLY!  We reached STACK ROCK!!  One look and the climb was worth it! 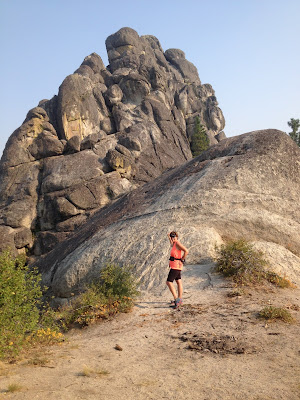 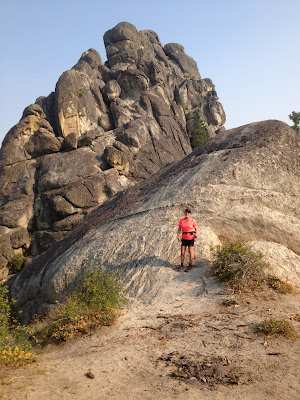 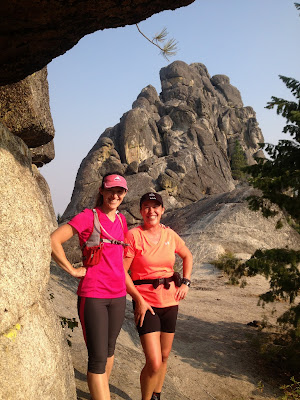 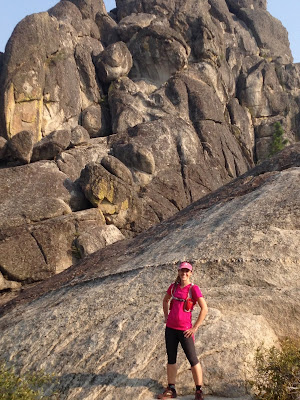 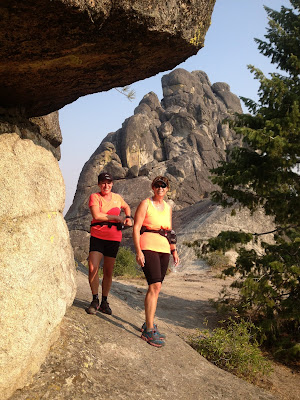 These pictures cannot quite grasp the beauty of this rock formation.  It was breathtaking!  And just think how many people don't get to enjoy such beauty because they don't know it's there or they are physically unable to get to it.  I am so glad we got to see it today.  What a GREAT B-day gift!! 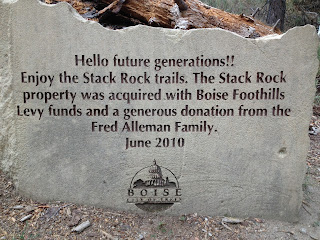 We continued to follow Stuebner's suggestion of going clockwise around the rocks.  We realized he was RIGHT!  The trail for most of the way back was wonderful!  The smoke did start to bother Kris a bit.  She said she wished that she had brought her inhaler.  Michele offered her pepper spray but for whatever reason Kris declined.  I was still a bit remiss about forgetting my watch.  "Hey, " Michele said, "Why don't you use your map my run app on your fun."  Are you kidding me? Why didn't she suggest that when we started!!!!!!!!!!!!! Why are we so stupid sometimes? 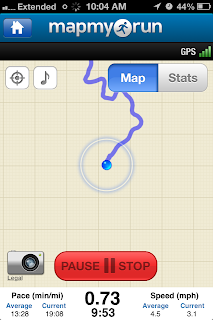 So I did get some record of the run for the last 3 miles at least!

The climb out wasn't nearly as back as the climb we had mid-way through the trail run.  We ran and walked intermittently.  We all started to feel loopy and tired.  I felt like I was on the last mile of a marathon! This was definitely a tough run for me to do today.  Michele began to point out poison ivy to me.  Kris yelled out, "I hope there wasn't any where I went to the bathroom earlier!" That wouldn't be funny, but yet it would.

FINALLY, we reached Kris' shirt!  We knew from here there was only .66 miles of climbing to go!
After a while Michele yelled, "There's my car!  That is the most wonderful thing I've ever seen!"  Now Michele is not insanely in love with her car, she was just really tired!

We tried to get back to breathing normally as we waited for Kris.  Her foot was hurting and she was taking it slower on the hill.  She had read about her injury online and it said DO NOT DO ANY HILLS!!  Whoops.  So we waited for her.  When she was about 50 feet from the car she started to yell for help, "Somebody call 911! I need a medic! Help!" 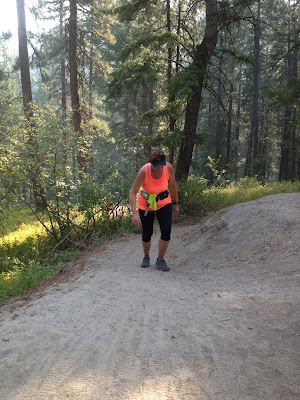 
As we headed home we began to wonder why the past two birthday runs have been such killers?  Kris' was Bruneau and mine today.  On Michele's birthday she was lounging in a castle in Scotland.  Well next year that is going to change!  Kris and I are going to start planning NOW!

Thank you for a memorable and wonderful birthday!  39 years young and fabulous! 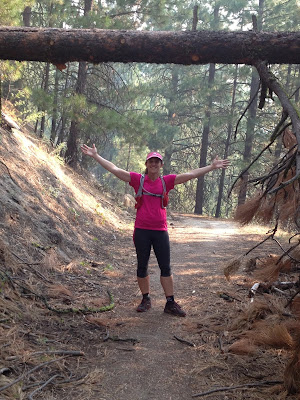