Today's trail run was a day to "mix things up".  We decided to do a loop we have done numerous times but in the opposite direction.  Sometimes when you do this, you discover that they way you have been running it is MUCH more difficult.  So we were going to start by running Toll Road to the Ridge, Shane's Loop in Clockwise Direction, then end with Buck Tail.  Good plan.

We headed up to our parking lot to start when we turned the corner about to pass the Veteran's Cemetery on Mtn Cove road.  We encountered a strange sight.  A Sheriff was slowly walking up the road with his hand on his holster.  He heard our car, turned and held up his hand for us to stop!  Then he made a scary, angry, do what I say face, and motioned us to go back and stay back.

Michele carefully started to back up.  Our imaginations began to EXPLODE!  Is there a mass-murderer on the loose?  Someone dangerous up here killing runners?  What is going on.  As Michele was wondering aloud of all the things it could be I pointed my finger and yelled, "BEAR!!!!" 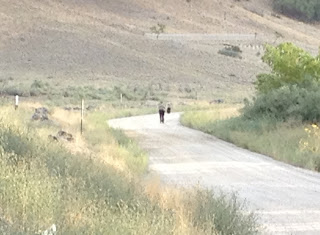 Up ahead a big black bear emerged! I couldn't believe it! I made Michele stop so I could try and get a picture.  This is as close as we could get.
Obviously we would not be able to park where we had intended.  But we were STILL going to run!  Another police officer arrived as we exited our car and headed off in the OPPOSITE direction. 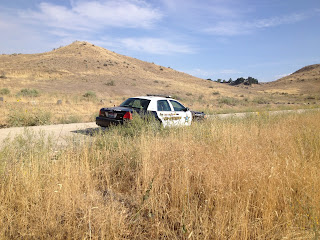 The different start only changed our run in one small way.  Originally we would have been able to run DOWNHILL on the Mtn Cove Trail before we hit Toll Road.  Our new situation forced us to start immediately on Toll Road, which meant UPHILL!!

It was TOUGH.  This was one time when running the opposite direction was brutal!  It felt like we were climbing forever with no breaks!  Both of us felt like are legs were about to fall off any second!  When we got to the junction for Shane's Loop we had had enough!  No more of this NEW junk!  We are running Shane's Loop Counter Clockwise he way we ALWAYS do .... the way we KNOW!!! 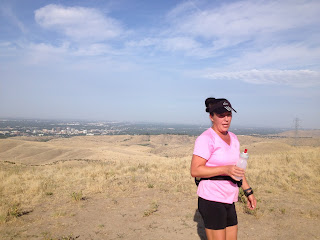 I think what compounded the toughness of this run today were several factors:
1. We saw a BEAR!!! We were a little nervous about the fact that it could have possible eluded the Sheriff and Police officers and could come bounding up the trail at any moment.
2.  It was HOT!!  Now I don't meant it felt warm that morning.  No! It was 9 AM and already in the 80s!!  I do NOT do well in the 80s.
3.  Because if the BEAR, we had to re-route our intended plan and start right away on a killer steep and long hill with NO warm up!!  This is tough on your legs.
But, no excuses, we just needed a humbling run to remind us that the trails are the boss.
We saw a few "chicken" runners who knew about the bear.  They did an out and back.  One lady in particular had two dogs with her and she was terrified.  She seemed mostly concerned about the bear getting her dogs.  I saw things differently.  To me the dogs would provide a necessary distraction to give yourself time to get away. Sorry, but the runner's life trumps the dogs in my option.  Anyway, she ran ahead of us and then at the top of Shane's loop we saw her coming back.
"Did you see the bear?" I asked.  No she did not, but she didn't want to finish the loop because it would go by where the bar was last seen and her dogs weren't worth the risk.  So, she was running safely, smartly, and using good judgment when she turned and headed back out.  What will we do.....
Complete the loop!!  We never seem to take the route of most wisdom.
Running down Buck' Tail was wonderful!  All downhill and smooth.  My legs were thanking me with every step.  We were still dying of heat though!  My cheeks were bright red and Michele started to run out of water.  But this run was short so we were in no risk of death (this time).  Michele was so hot that she announced, "I think I have hypothermia!"  I didn't answer, I knew what she meant ad I wondered how long it would take her to catch her mistake.  It only took a few strides, "I mean Heat Stroke!!"
﻿

Reaching the car safely we discovered 4 more Sheriff SUVs and a fish and game truck. A small crowd of runners had also gathered.  We were back just in time to see them shoot the bear with a tranquilizer dart.  It had taken them an hour and half to get him and it was over a mile from where we first saw him!  WOW! 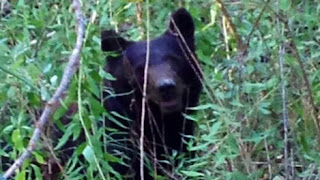 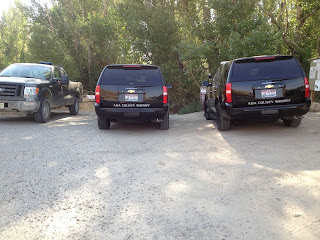 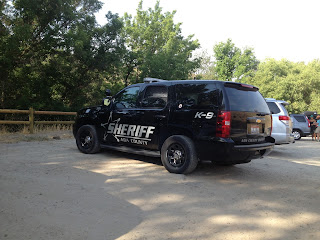 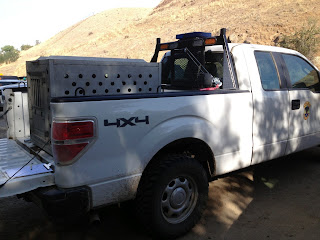 So now we can add black bear to the creatures we have seen on the trails.  I am also re-naming Three Bears Trail to just.. 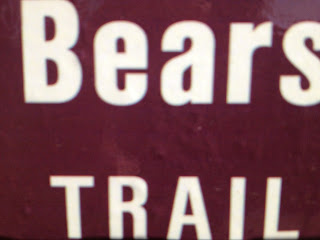 Seeing ONE bear is plenty.

Channel 7 put up an online article about the bear..... you can read it HERE
Posted by Jodi at 9:00 AM