Michele and I have did a black Friday run for the last three years of so.  We get up really early, hit some sales at her husband's store then hit the trails.  We have also run the same loop.  This year Michele suggested we go different, we go big, we go EPIC.  I'm in!  We tested Kris in Texas to tell her of our plans.  We were yelled at from 1,000s of miles away!  True Kris form!

We started at the second Corral's parking lot.  The "idea" was to run up to the Hard Guy trail, take Hard Guy to Ridge Road, then to Dry Creek which we eventually bring us back down and join Hard Guy.  That was the plan.  A plan that we didn't study out very well.  A plan that was supposed to be 17 miles. A plan that should get us home by noon.  A plan that went terribly wrong and then became EPIC.


After we saw these bear tracks we were being extra alert. Sometimes being more alert can make you a bit edgy.  A few minutes later a huge flock of quail BURST out from the sage brush and flew away.  Have you ever hear the noise created by a few dozen quail hitting the air.  It is extremely loud.  We both screamed.  This was a first.  I can't remember ever screaming bloody murder on the trails before.  Mission of increasing my heart rate to 5,000 complete.

Hard Guy definitely lived up to it's name!  We did so much walking.  It was a really tough climb.  My legs were burning!


When we were finally changing terrain from sage brush to pine trees, we knew that we must be getting close to ridge road.  We had not seen any living things this entire run except the heart attack quail and a few other birds.  There were no other runners, no rodents, snakes, not even any bugs.  Suddenly Michele calls out, "Holy Cow! Look at all of those runners."  I look the direction she is pointing and I see a couple dozen bodies moving very rapidly in a super fluid motion.  "Those are deer!"  I exclaim.  Then I laughed and laughed.  And I teased her about it the entire remainder of our run.  Then FINALLY we pop out to Ridge road and what do we find? 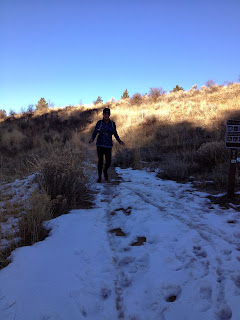 Ridge road was 2.2 miles of snow, ice, walking, water hazards and just in general having to go really slow! 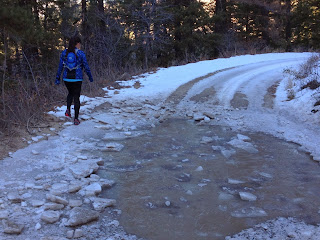 Luckily Michele had remembered that the Dry Creek Trail would appear after 2.2 miles after we left Hard Guy.  Other wise we would have missed it.  This is the turn.  I would have NEVER noticed this!!

We started running down this trail (lots of snow again) and came to a fork in the trail.  Left or right?  To the right was a lot of foot traffic prints and tire marks.  To the left were only deer prints.  "Let's go left."  Michele said.  " I think we go left."

This ended up not looking like a trial at all  We were going through deep snow, brush, etc.  Finally after a mile we decided, maybe we should have gone right....back we go.


Finally we were on the right trail.  Only problem was we had just added 2 miles to our already planned 17.  Uh..Oh.  We checked fuel and water and we were good, so we kept going.  Dry Creek was fun, would have been better with out the icy snow areas, but still fun.  We actually crossed the creek 18 times!  I took a picture every time too!! 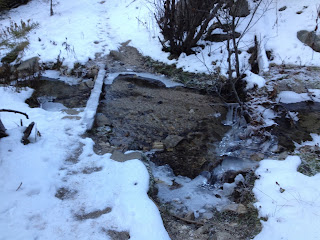 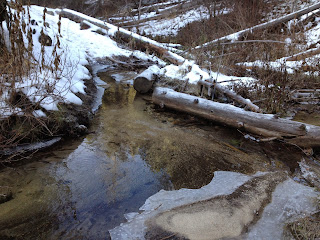 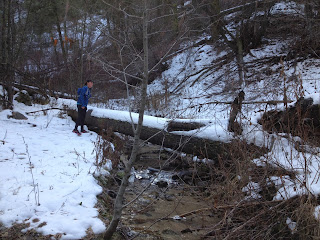 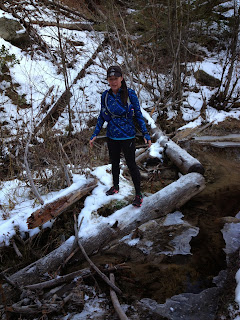 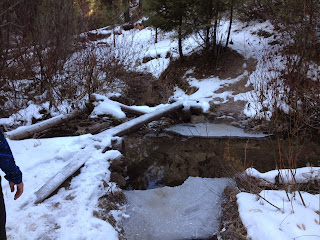 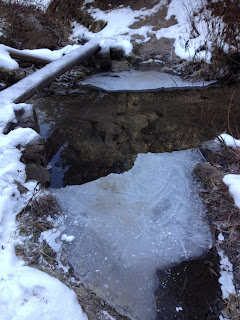 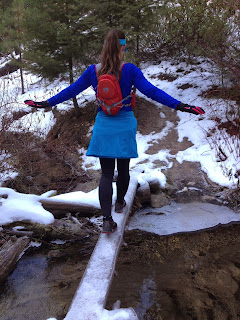 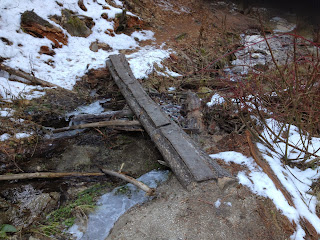 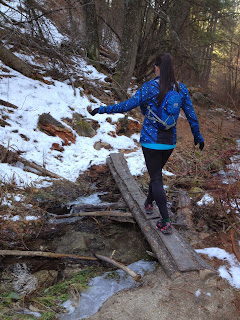 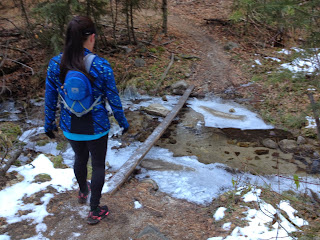 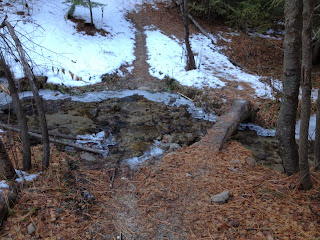 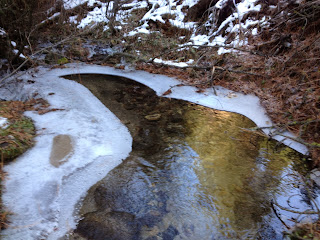 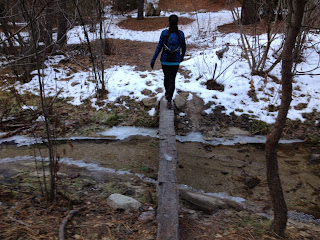 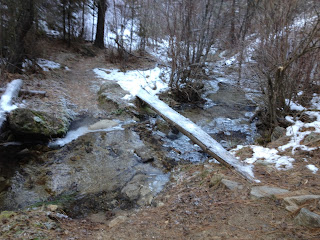 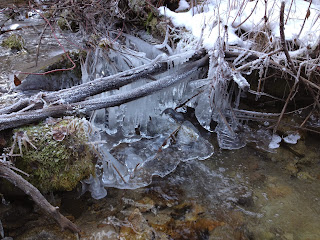 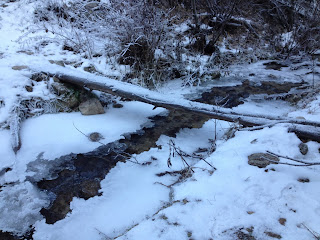 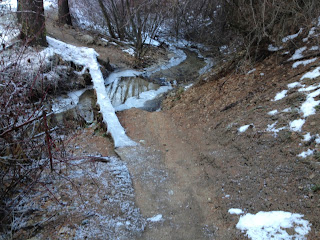 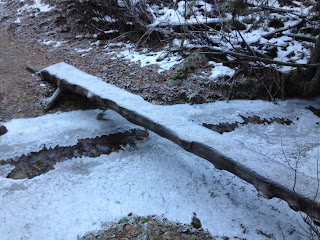 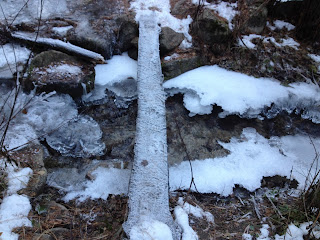 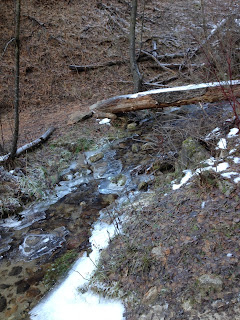 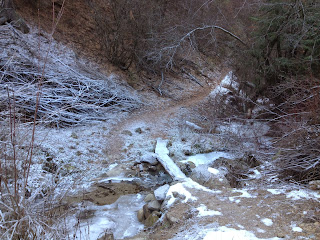 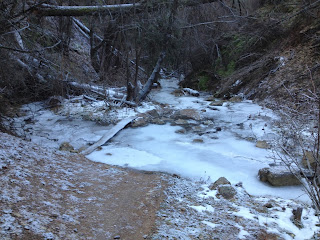 Finally we stopped crossing the creek and came out to nice rolling trails.  The discussion began as to where were we and how were we going to find the way back to hard guy.  Eventually came to our second MAJOR fork in the round.  Last time we had picked the wrong way.  This time we had 3 choices.  I thought I knew where we were and had good bearings.  I felt we should go left and it would lead us to back to Hard Guy.  My instinct was correct, we did need to head left, just not left on the trail that we did.  After running for about .6 of a mile we actually saw people.  We stopped and asked them "Where are we?"  I'm sure they thought we were odd for sure.

Turns out we were headed back up to Ridge Road.  NO!  Ugh yet another wrong turn!  This one turned out to be an extra 1.5!!

1)   Always study out the trail plan before you head out onto new trails
2)    Let someone back home know where you will be (we had some worried husbands)
3)    Do not use Island Nectars Gu.  It is gross
4)    When it comes to a choice of following human footprints or animal prints, chose to follow humans.
5)    Food is better than Gu's and Beans on long runs
6)    Don't pause your Garmin when you stop to tie your shoe.  Inevitably you will forget to start it again.
7)    I can run for over 5 hours!
8)    Long trail runs?  Doable and I am ready! 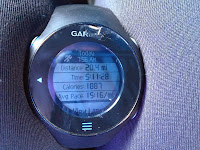 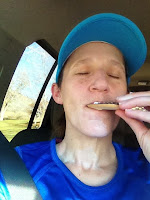 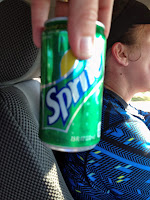 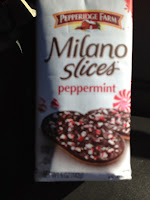