So this year I turned the BIG 40!!  I decided I needed to do something HUGE to really show 40 that I was not old!!  Michele hatched  a plan of running 40 miles on my birthday!  At the time of this plan I had not run any further than 31 miles.

It wasn't long before Michele planned a trip that would have her gone on my birthday.  Now you would think sisters would come before vacations, but apparently that is not the case. So, knowing how difficult it would be to run 40 miles alone we postponed the run until Sept 18th.  Why is that a significant date?  That is my oldest son's 19th birthday.  He is serving a mission in Panama City Panama.  Michele figured I should be doing something that day to distract me from the fact that he was gone.  BINGO!  40 mile run it is.

The plan was that we would run and her husband would meet us at a 16 miles for refueling.  Then we would be on our own.  We were doing a modified out and back.  If you follow this blog you are well aware that things NEVER go as planned.

At mile 16 he was there with wonderful pringles and sprite and water, etc.  Michele announce that she was DONE!  She was going to begin the "back" part of the out and back!  WHAT?!  We still have 6 miles to go before the turn around spot!  Nope, she said she was done.  I was dumb founded!

So now it is time for the Plan B.  Michele would walk/run until she got to Glenwood bridge.  Hen she figured I would by that time have run out and back 6 miles and then gone the additional mileage to catch her.  I didn't think this was plausible but she assured me it was since she would be walking a lot.  Thus Plan B began.

I was on my own now.  It was humid and overcast but not too bad weather wise.  I luckily had my ipod and was doing fairly well both physically and mentally.  I even had a few light showers which were very refreshing.  That's when Plan B fell apart, I was at mile 21.

A text came from Michele; "How close are you to being back?"  WHAT?!  I hadn't even turned around yet.  She was only 4 miles from the Glenwood bridge, I  still had 10 to go!!!  At that moment I decided it was time to turn around and head back.  I could make up the needed mileage at the end.

Plan C was born at my insistence and dare I say anger?  This happened when Michele texted that he had reached Glenwood bridge.  I was currently at mile 30.  I was beginning to slow and have a few walk breaks.  I was 6 miles behind her.  Then I commanded her that she would turn around and start walking towards me and would NOT stop until she saw me.  Thus Plan C began.

Michele kept textng me to see what mileage I was at, etc.  I forgot to tell her that part of Plan C was that I would ignore her text messages.  And I just kept running.

Finally we met up at about 33 on my watch (no idea what Michele's mileage was at this point).  Finally I wasn't on my own anymore. Running with someone else to support and talk to you is 100% easier.

7 miles to go....we then instituted Plan D.  Run a little, walk a lot!  I was running out of water and out of steam! But because my sister was back with me I knew I could do it! 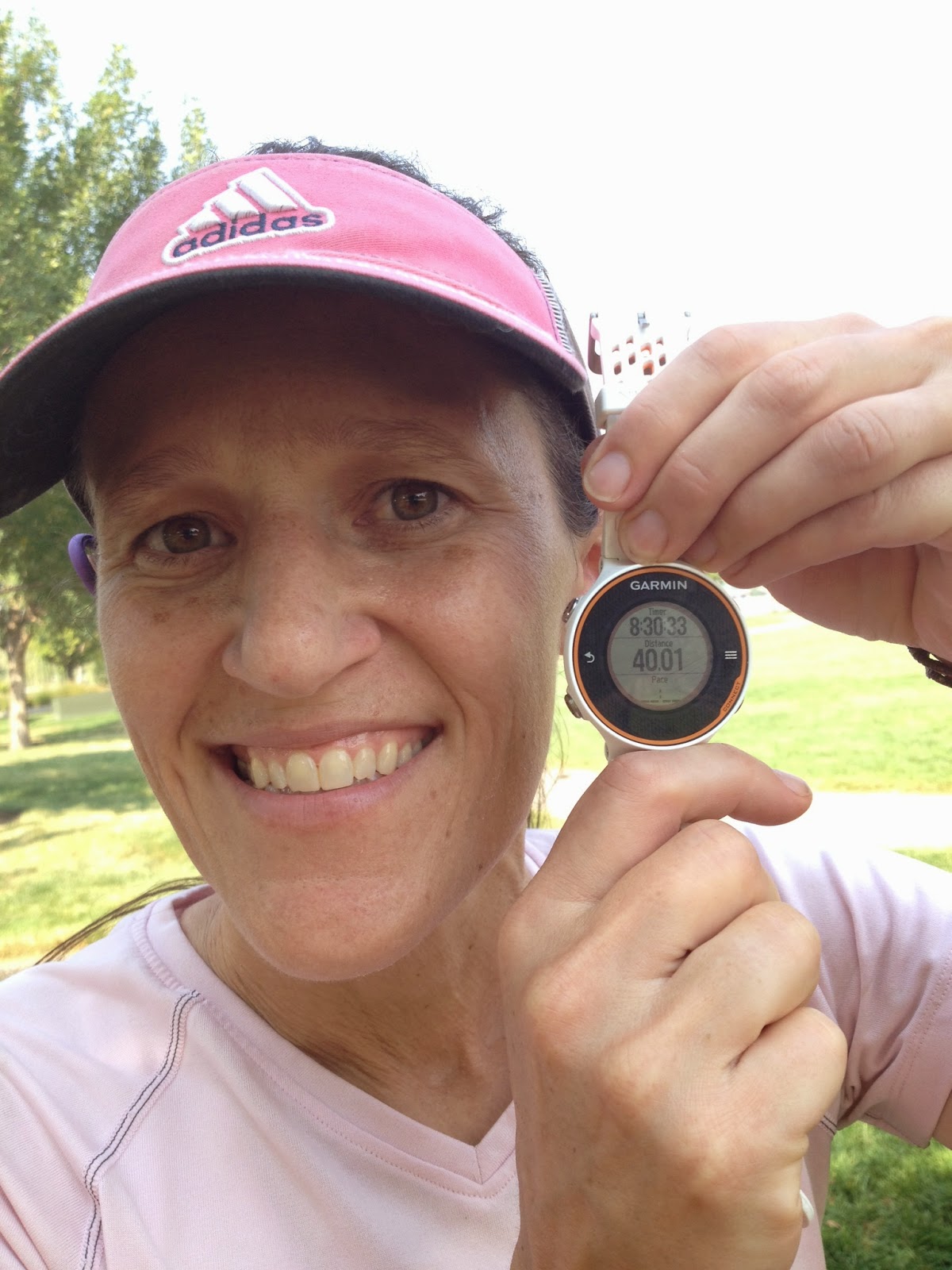