The cold can make you crazy!

So it is 7:30 in the morning and my car thermometer says it's 14 degrees outside.  I am headed to Michele's for our weekly trail run.  At the stop light I quickly text her the temperature.  Her reply is simply one word....BALMY.   I laugh and drive on knowing we are either crazy or idiots. We would probably still be running if the temp said 4 degrees!

Yes, it was cold. I felt as if frosty ice was forming on my nose and chin.  I had a strange sensation of no depth perception and didn't turn sharp enough on my turns, nearly falling a few times.  We raced a runner in black. I could see him a ways off behind us.  It was time to race.  He was not allowed to beat us.  He had no idea we were challenging him.  When I saw him I  said, "If that guy passes us I am going to die!"  He never did pass us (I actually think he was on a different trail all together!)So I am counting that as a WIN!

Later, we saw a cross along the trail to commemorate someone's life and death. Now you see these all of the time along the roadsides, but on a trail?  That was a first for both of us!  Michele decided it was a runner who got attacked by either a mountain lion, mad dog, or mass murderer at that very spot!.  We both agreed that we would rather face the mass murderer because we could run longer than he would care to keep up the chase.  We didn't see many other runners out today.  One biker with a dog that said there were "more" coming behind her. But nobody did.  She was hallucinating due to the cold most likely.  A really skinny, very fit, very fast chic who was sprinting up the HUGE hill we just had gone down.  She must have been gone crazy due to the COLD.  The phantom man in black who we beat in our "race".  A nice man on a bike with two dogs who pulled off to the side of the trail to let us pass.  I'm not sure if he was being polite or if he was afraid of us because moments before I was holding my hands up in the air yelling, "AREN'T YOU GLAD YOU PUT YOUR GLOVES BACK ON?"  to Michele who was behind me.  He probably thought the COLD was making me lose my mind.  But the COLD had actually been inspirational for me today. I invented the shadow challenge.  Try to run with Michele behind me so our shadows overlap perfectly.  Not as easiy as it sounds and not as delusional as it sounds.  But, sadly the Professor wasn't out today. Some of you may wonder who this professor is. I have mentioned him twice now.  Well, you'll have to wait. Maybe another day. 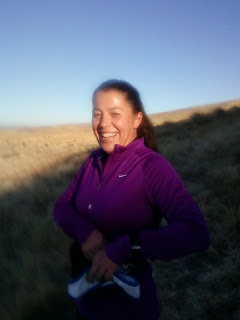 See how happy Michele is when we run?  She got to try out her new Garmin 610 (show off).  I use the Garmin 410 which Michele isn't quite "wise" enough to get to work right. Haha.

Despite the COLD, we had a good run. We always do. And NOW on the trails we have special Sister power......It's in the shoes! 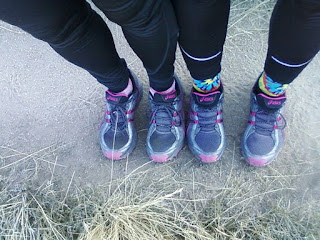