My Sister May Be Secretly Trying To Kill Me

My older (and apparently wiser) sister and I have been running together for a couple years now.  We run together once a week and do several half marathons together each year.  Over the past year we have developed a great love for trail running in the Ridge to Rivers Trail system (Boise, Idaho).  If you have ever run the trails you know what I mean.  A few days ago we ran a 12 mile trail run with nothing but hill after hill after hill (all of them uphills we never seemed to go down!)  Later that day, I was sitting at home in my sweats by the fire feeling great that we had tackled such an expert trail but equally exhausted when Michele (the older and wiser sister) called.  "Jodi, I have our New Year's Resolution all picked out for next year."  Yes, you read that right, she had picked out what my New Year's Resolution should be.  She is always coming up with crazy runs, schemes and plans and I usually go along with every single one of them.  She continued, " I've decided that we should run all 152 of the Ridge trails in the year 2012."  I didn't hesitate, "Sounds great."  Of course I was in, I was always in.
This is quite the undertaking for sure.  This is in addition to our other 2012 running plans which include a Trail 10K, Robie Creek (toughest half in the west), and two marathons.  Yes, it is official, we are insane. Since we only run together once a week we only had 52 days to include all 152 trails.  Logically she replied, "Well, we will do more than one trail at a time DUH."  An average of three trails each run to be exact.  Now these aren't rolling meadow trails either.  These are grueling hills, some so steep you feel like crawling up them would be easier than walking let alone running.
So we then decided to blog our adventures.  If it's anything like last years running it will include severe winds, snow, sleet, cement like mud, bridges washed out, sliding down mountain sides, puppet legs, getting lost, delirium from exhaustion and much more. We are hoping it is informative to others who want to try these trails out for themselves, but if anything, it WILL be entertaining! Here's to insanity! 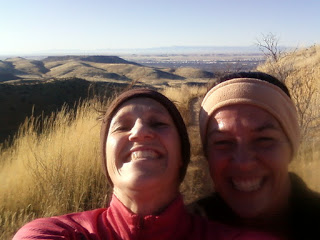