The Ho-Ho-Ho Half Marathon!

Todays trail run was meant to be an enjoyable pre-Christmas eve run....about 10.9 to be exact.....was the plan.  It was a repeat of the trail we ran on black friday. As I was driving to Michele's house my car thermometer read 8 degrees.  I wondered if I had dressed warm enough...sure.

At Michele's I met our new running partner who has decided to run Robie Creek with us.  His name is Zach (no he is NOT the professor).

Zach's training for today was to drink a cup of coffee while we headed out the door. Then he stood on the front walk way as we drove off.  Oh yeah, he's gonna be ready. NOT!

We were so cold at the start of today's run!  I couldn't feel my fingers or move my face!  We passed two run/walkers and I suddenly realized what we needed! "We need to grow beards!" I yelled back to Michele.  Yes that would keep my chin from freezing stiff.  Michele agreed, but then after a few strides we realized our husbands would not like it so much.

We had to make a quick stop at the bathrooms (Michele's needs).  It seems like whenever we run together my Garmin is always behind hers.  It really annoys me!  Nothing is worse than when she shouts out her mileage and I am behind....especially when I am running in the front!  So, because it was cold and I wanted to keep moving, but mostly because I was sick of having my watch behind, I started running laps around the bathroom.  Michele heard me and yelled "Stop IT!"  So, I stopped my watch, but kept moving to stay warm.  (This part of our trail run is funny later on. Trust me.)

Another notable mention here. THE FLASH HAS ARRIVED ON THE TRAILS! 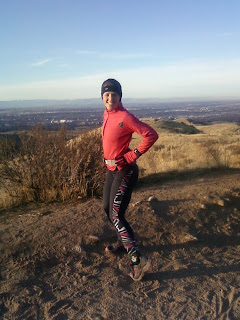 That's right. My "flashy" new running tights had their first run in the hills today. (Although this pose looks unnatural)

This run today involved the "sidewinder" trail, which is TERRIBLE.  But once again the amazing running sisters conquered it.  However at one point Michele began talking, no yelling to Santa Claus.  We had been running uphill steadily for at least  5 miles (and not easy uphills).  So from behind me I hear... "Oh Santa, All I want for Christmas is a downhill.  Just put it in a box, wrap it with a bow.  All I want is one downhill PLEASE!"  Of course she lied.  That wasn't all that she wanted.  When we hit "love" rock she wished Steve was there with a big lunch for us.  Alas he was not.

Eventually we hit some downhills.  It was so wonderful!  Michele commented that she felt she had super powers!  At a water stop I noticed how dirty and gross her shoes were.  "Do you drag your feet when you run?"  I asked.  She said it was because she had to run behind me and I kicked up a ton of dust.  Then as I resumed our run she called out "Pick up your feet high stepper!"

We ended up climbing to 4,000 feet today. It was a beautiful view! This is a shot after we had gone down a ways.  We were actually up by the power pole! 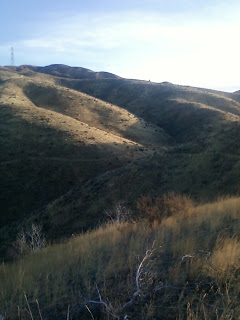 Since we were so high,  the descent, at times was drastic.  One hill was so dangerously steep we nicknamed it Suicide Hill.  Rule number one in trail running; you are not allowed to talk or laugh or make any noises while cruising down Suicide Hill!  Michele was yelling, screaming, and making all kinds of noises.  It was making me laugh and I thought for sure I was going to lose my footing and eat rocks.  I had to jump off the trail into a sage brush to stop because she had me laughing so hard.  Michele, you must follow rule number one!
Now we come to a crucial moment in the run.  A fork in the road.  To the right will take us on our pre-arranged course making our Christmas Eve Eve run a nice 10.9 miles.  Mostly downhill as well. To the left....well let's just say not mostly downhill.  Michele, still feeling like a super hero suggests, "Let's go left up this hill and loop back around.  Shouldn't be too much further."  And of course I was in.  I'm ALWAYS in remember?

Thus began the absolute longest run of my LIFE!  Not only was it all uphill another bazillion miles,  but my legs had decided they did not want to function normally any more.  And then it appeared that nothing else could be wrong, I had to use the bathroom, BADLY.  I knew there was one coming so I focused and just ran.  At this point rocks began to rise up from the trail as I ran.  They would suddenly pop up and try to trip me.  I kicked one and yelled and stumbled and was oh so close to falling.  Michele, laughing, began to realize that my watch was ahead of hers, .15 miles to be exact.  When we arrived at the bathroom (Hallelujah) she mentioned this.  I told her to run laps around the parking lot.  To my utter and complete amazement, she did it!!!!  Now if you knew her, you would realize how remarkable this was! So finally, our watches matched.

Stopping at the bathroom was a BAD idea.  Our legs were DONE.  They did not want to run anymore.  It felt like I was running in place or on a moving sidewalk the wrong direction.  Michele put it best. "I feel like a sumo wrestler, with a big belt on, pulling a semi."  Yes, I'm sure other runners out there know exactly what we experienced.

But, we made it.  An unplanned half marathon on Christmas Eve Eve.  I learned a few more things today like I do on every run with my sister. I learned what hypothermia feels like including the urge to crawl under sagebrush and just sleep.  I learned that my sister is secretly competitive.  I learned that Santa Claus is real and answers wishes, we got our downhills after all.  And I learned that always being "IN" when my sister suggests something, might just kill me after all.


p.s. on the drive home Michele said she thought she might have pneumonia! Hahaha
Posted by Jodi at 5:55 PM