As we were driving to hit the Mountain Cove trail this morning, Michele said "Maybe we better start our Robie Training today."  And if you are following this blog you will know that I was "in", I'm always in.  This was our lucky Friday the 13th Run!!!

The Race to Robie Creek, advertised as the toughest race in the Northwest.
http://robiecreek.com/course/
It will be Michele's 6th time running Robie and my first.  We have been running trails so much that I am really excited for this race.  We drove up to the top of Shaw Mtn Road, right where it starts to go downhill.  Luckily there was a porta potty there because I had drank waayyyyy to much water that morning.

At run start it was about 17 degrees.  Freezing cold!  This run is almost entirely in the shade too!  We saw exactly zero other runners. It was agreed that our INSANITY IS ESCALATING!!

I tied a bandanna over my face because it was so cold!  I dubbed myself the pink bandit!  It helped and when Michele complained that her face was so cold I could laugh and say "Mine's not!"  The trail was great!  A little snow, maybe a quarter of an inch but no ice or slick spots.  We ran it in our trail shoes just fine! 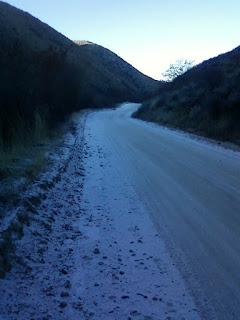 Reaching the summit was cool.  It wasn't what I had expected it to look like but we did it!  We did walk the last .5 to the top.  Michele said my goal for the race should be to run it.  Don't you love how she is always determining what MY goals should be!  This time I was NOT "in".  I do not think that is a goal I am ready to set!  Here is a view of the summit 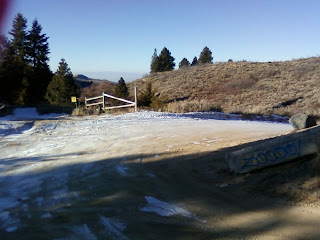 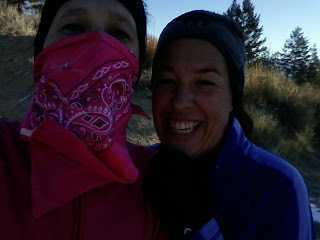 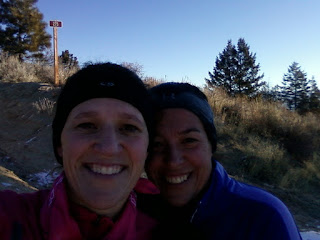 I only ran the first 3 miles with the bandanna on.  I'm not that big of a wimp!

So how HARD was this run to the summit?  Well, not as bad as I have been told by others.  In fact I have run a lot of trails that are MUCH harder!  What made this one tough was that it was one constant uphill.  Even though the incline is more gradual, it is still a constant up.  That does make it tough.  But it wasn't any harder than three bears trail , dry creek half  or the high desert half.  So I am excited for this race!

On the run down our fingers got sooo cold.  I realized that it was because they were not being moved.  I started to open and close them as I ran.  Michele was running with hers still in fists.  Finally she yelled, "This is the worst pain I have ever felt.  What's that disease you get when your fingers fall off?"  I replied, "Frostbite?  That's not a disease Michele."

I then told her to also open and close her hands while she ran.  Finally we both had warm hands again.  On our entire run it never reached over 18 degrees and we only felt the sun once or twice for a very brief moment.

Interesting sights on the way back down Rocky Canyon road; a huge cave that Michele thinks is being used, a few cars but no people, and the most interesting of the day was  a house that looked like it was from the 1800s and had slid half way down the hillside then stopped.  We spent several minutes decided if it started to fall if we would back track away from it or try to out run it.  We decided to back up. Wish I had taken a picture, but I was enjoying the downhill so much I didn't want to stop.

After this first run up to Robie I now need to decide what my goals for this race will be.  Any ideas?
Posted by Jodi at 1:11 PM