I'll take a carrot cookie with a side order of PR!!!

Well, it was time for another RACE!  This was one that we have all done before.  I ran it in the fall of 2010 and 2011.  Michele and Kris had run it in 2009 and with me in 2011.  Last year it conflicted with the Race to Robie Creek.  This year....I don't exactly remember why we decided to run it.  It may have been because I needed a half marathon for my marathon training.  I don't remember exactly the reasoning but here we were. 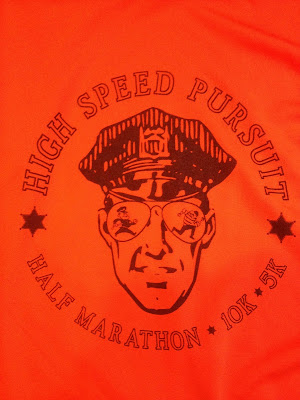 Well, those who run with me know that I am a pretty big race T-Shirt critic. This shirt was long sleeves and better than some of their past ones.  Unfortunately mine was WAY TOO BIG!  I did not realize that they were uni-sex sizes and ordered a small.  I needed an XS.  My biggest gripe about their past shirts was that there was no date on them.  This year they had improved on that issue and I really liked the back. 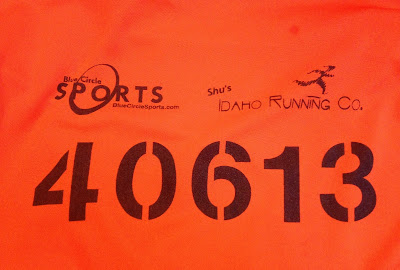 It looks like we are real prisoners and this is our inmate number, pretty cool design!

Our race chatter actually started a few days before the race day.  Race time was to be 10:00 AM.  We needed to get their in time to get our packets and warm up etc.  I wanted to leave at 8:15 from Michele's.  Kris wanted to leave at 8:45 AM.  Let the battle begin.  I finally offered 8:30 as a compromise.  Then Kris started to send my hate texts yelling at me!

Kris "NOT SURE WHY YOU WANT TO STAND AROUND FOR OVER AN HOUR. IT ONLY TAKES 20 MIN TO GET THERE! :-) BUT WHAT EVER YOU WANT.

Me: "Hey!!!  It takes longer than 20 minutes.  Michele will probably get lost! Don't get snarky!"

Kris: "SNARKY? WHERE DID THAT COME FROM MY QUEEN? I KNOW THE WAY SHE WON'T GET LOST. MAYBE 23 MIN,"

Me: "We need bonding time."

Now I did not know how long it would take, So we agreed on 8:35.  Ironically after we pulled away from Michele's house at 8:37, Kris realized that she had "forgotten" her peanut butter toast. Luckily we were close enough to turn around and go get it.  She ran in grabbed it and got back to the car.  What time did we officially pull out of the driveway at then?    8:45!!  That stinker.

It was raining before we even arrived at the prison.  Michele and I debated several times on what to wear, jacket on or off.  Eventually we both opted for jacket off.  Kris scolded us telling us how cold we were going to get.  We had already made her change out of tights into capris earlier that morning and we were STILL hearing about it almost an hour later. 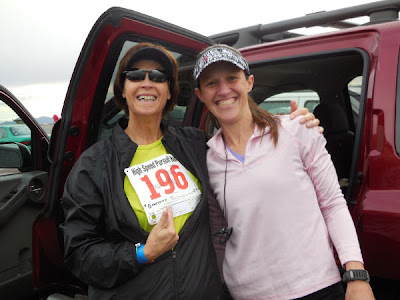 While it was rainy and cold we knew we would warm up.  It is easier to run while feeling chilly than it is when you are HOT! 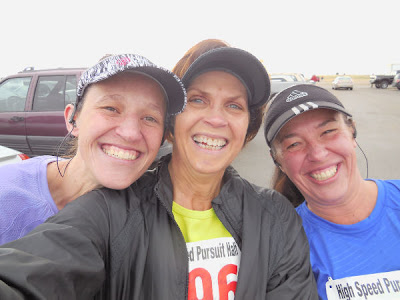 Before the start there was an actual "high speed pursuit" that they staged.  A car drove by really fast being pursued by several police cars with their lights and sirens going.  That was kind of cool.  Then there was a BLAST (gunshot?) and we were off!!  We ran through the prison SWAT team lining the first few yards of the course. 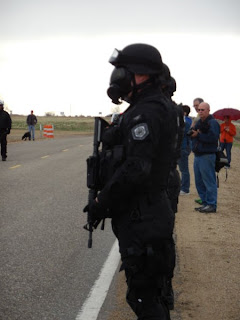 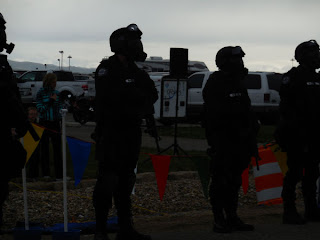 The surface we started on wasn't road, but it wasn't trail either.  It was like a canal access road.  The dirt was soft, rocky and uneven, full of holes.  I was trucking along when all of the sudden....ZING!  I felt a shooting pain in my left knee.  Oh no.

To say the next 5 miles were hard would be a vast understatement.  The sharp pain in my knee would not dull, would not go away!  I even stopped and rubbed Biofreeze on it at mile 4.5.  That did absolutely NOTHING except make my hand smell like biofreeze.  Could I do this?

When I hit mile 6 in the race, I began to realize that my secret goal was not going to happen.  I began to have doubts that I would be even able to beat my previous time. I did some calculations in my head and figured at the pace I was going, I would be lucky to come in at 1:56.  (Note:  you would think I have learned by now from previous experiences.  Even though I have a college degree in mathematics, I am incapable of doing math on long runs.)

I will admit I had thoughts of just pulling back and taking walk breaks.  If I wasn't going to PR then what was the point.  I said a prayer in my head pleading for strength to do this.  And then I just plugged along.

Suddenly, I saw the sign for mile 10.  Hey, 3 miles left.  I can do this. I can finish! In fact I realized the chance to still PR existed.  I had done enough hard training runs that I in fact knew I could pick up my pace.  Besides I figured the faster I ran the sooner I would be done!  So I put my head down, stopped looking at my watch and began to push.

It was GREAT weather for a race.  There was constant rain and a breeze but no heavy winds.  I would much prefer that over a blazing sun.  I did not ever get cold, in fact I worked up quite a good sweat.  At mile 12 I reached the "killer" hill that is on this race.  I dug into the last reserves I had and just looked at my feet as I headed up.

Turning the last corner, I could see the finish line.  About 2 tenths of a mile to go. I finally stole a look at my watch.  I could not believe what I saw.......

Michele also loved the weather.  She has been following some of my marathon training an has really increased her pace.  She said near the end she started to pace with a guy.  He really helped push her in.  She even ran the entire hill!!  I was standing under the tent shelter trying to warm up.  I was soaking wet, all the way down to my shoes!  My dry clothes were in her car.  I thought I had until around 2:10 before I started looking for her.  Suddenly I saw her coming across the line!  I wasn't there to cheer her in!  I tried to run towards the finish but couldn't.  My knee was now iced and wrapped in syran wrap.  It was so stiff and sore that even walking hurt.  I hobbled towards her just as she was getting her finisher medal. 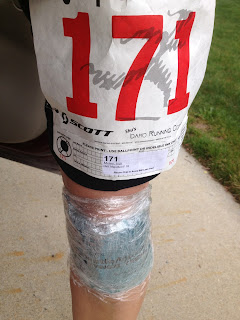 Thankfully I was able to FINALLY get on some dry clothes.  We huddled back in the tent to wait for Kris.  She said not to expect her a second before 2:30.  SO we tried to get warm while we watched them hand out awards.

When they got to my age group they announced "Third place with a time of 1:47:31, from Middleton, Jodi Meine!" That's right!  Not only did I PR on this course, I destroyed my previous time by over 7 minutes!  The best part was that I achieved my secret goal.  It was a big time mental victory as well.  And further evidence that I am incapable of doing math when running. 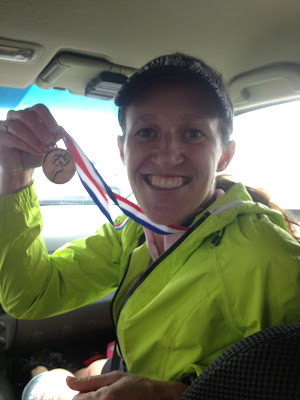 I was so proud of myself and of Michele and....Wait! Here comes Kris!!  We cheered on that gal as she trotted in at a 2:28:10!  WOW!  We are one rockin group of runners today for sure!!!  I told Kris we needed to check if she placed in her age group but she said, NO.  And we got ready to leave. 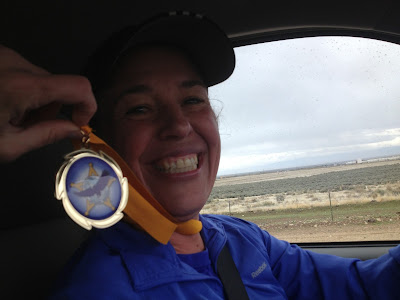 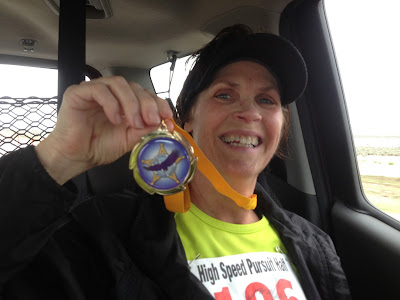 Michele had some yummy Carrot Cake Victory Cookies and a baby sprite for our celebratory drive home!  We all PR-ed for this course and had an awesome time! 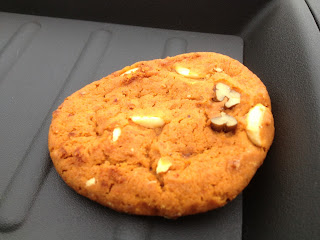 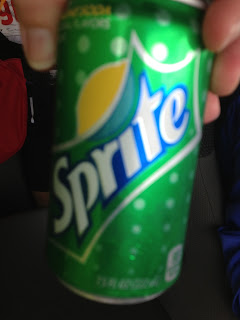 I must say I have the greatest running partners around!  As I type this my knee is killing and I am hoping it feels better soon!  The results are in (see them here) and wouldn't you know it......

Kris got SECOND in her age group!!  When will she learn to just listen to what I tell her to do???

One more really neat thing.....as I was driving home, the clock on the car hit my race time!!  :) 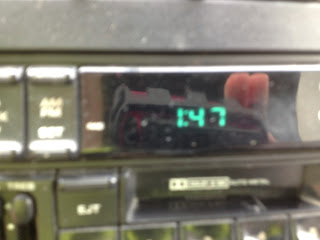