Doesn't that sound like something you would love to jump up and tackle?  Well, apparently it sounded appealing to us because while others were home in their warm beds listening to the wind howl and rain beat on their windows..... we were headed to Bruneau Sand Dunes!

Kris is turning 55 tomorrow so this was her "birthday" run.  We showered her with gifts and poems and lots of love!!!  Then we got ready to torture her on the hardest run ever imagined!

A little but about Bruneau Sand Dunes first. 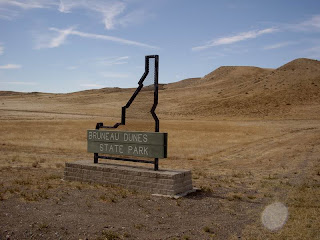 Bruneau Dunes State Park boasts the tallest single-structured dune in North America with a peak rising 470 feet above the surrounding desert floor. Doesn't sound too terrible does it?  Hmm well we will see!

I woke up while it was still dark and so cold!  Gathering my things I headed to Michele's.  I have been nursing a sprained knee since last weekend's Half-Marathon. It was still hurting and I had only gotten 2 runs in this week because of it!  I am supposed to be training for a marathon in May that I want to have  a big PR at.  I was worried about running this race and wrecking my knee even more.  So, the idea began to bounce around in my mind of only doing the 10K and not the 20K.  I decided to wait and see.

Kris was driving so I went to climb into her car.  What in the world? 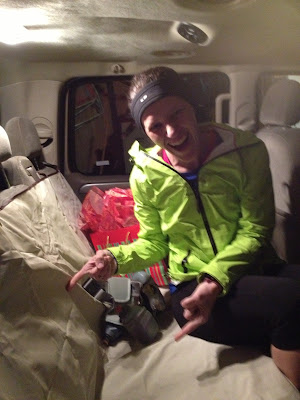 Kris had put some sort of water proof doggie pee-pad all over the back seat?  Does she think I can't hold it for the hour and 20 minute drive???
Then I look up front! 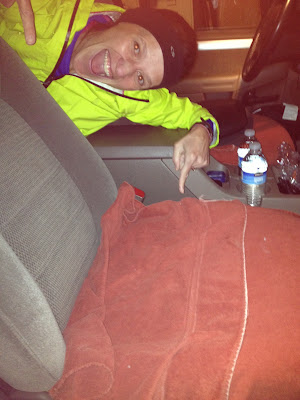 There is stuff up on Michele's seat too!!  Well, at least hers is soft and fluffy!  Mine is plastic!!
"Hey!" Kris yells, "I don't want my car dirty and sandy!!"
As we headed out of town, Michele presented Kris with her birthday present.
"Now Kris I am going to open it FOR you.  Then when you get home you can open it again."  What a good friend!  Then I read my Humpty Dumpty "the runner" poem for her.  It is a glorious 5 page tribute to her as a runner! Kris laughed so hard I thought she may wreck the car!   Unfortunately it will not be posted here on the blog.  This type of humor is not meant for public consumption.
The car ride conversation jumped around and was a little bit scattered.
"I didn't bring race confirmation."
"What if they don't have our names?"
"Then we go home!"
"Do you know where you are going?"
"No I thought you knew!"
"Well use your phone techie!"
"Should we run with a timing chip?"
"Why? I'll be so slow I won't place."
"Well, we are sticking together so no one will place but me!! The slowest!"
"Look at this weather, who's dumb idea was this anyway?"
"It's going to clear up."
"No, it is not!"
I'll let you guess which comments were made by whom.
When we got to the park, we were FREEZING!!  The rain was pelting down and the wind was blowing strong.  We ran over to packet pickup, jumped in place to stay warm.  I overheard the race director ask someone, "Should we worry about lighnting?"  Oh man, what have we gotten ourselves into this time?  When they asked what race we were running and our last name I wanted to say, 20K last name Stupid!  But I didn't.  We got our "AWESOME" hats and race numbers, then ran back to the car!
﻿ 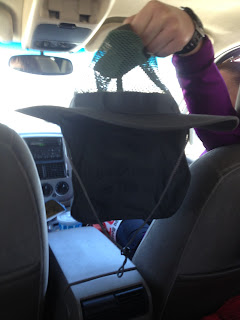 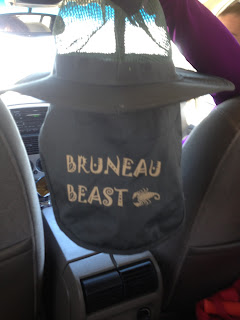 We all had on Capris.  Those of us who had thought ahead (ahem) also had tights.  So Michele and I quickly changed into tights since it was so cold.  We started to layer up.  Kris decided to chug a weird Dragon Energy Drink.  I'm not sure what was in it but all of the sudden it was a belch fest in the car!  Holy Cow was she burping up a storm! 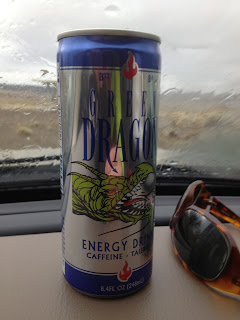 It will be important to note at this point that this drink did not help Kris in the race at all.  The only thing it helped her do was to burp like an old man watching football in his lazy boy!
Now we all layer our clothes for cold wet weather in a different way.  I guess you can say we each have our own unique "Style".
Jodi hasn't got much to choose from.  Usually it is whatever is clean and bright colors are enjoyed.
Michele likes to color coordinate as much as possible, shoes included.
Kris? Well, Kris has a style that is difficult to describe.  It's something that you just have to see... 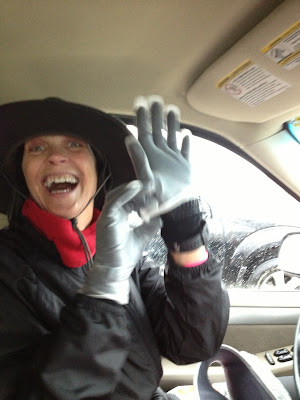 First - We wear the race hat because it will keep the rain and sand off your face.
Next - Place rubber latex gloves OVER your regular knit gloves to promote extra dryness.
Third - Stuff everything you can possibly imagine into your back jacket pocket. Don't hold back, just put it all in there!  Extra socks, another hat, energy drinks, GU, etc. You never know what you might need!
Fourth - For neck warmth place TWO headbands around your neck.  Make sure the hat is cinched around them too!
I could go on and on but you get the idea....
﻿

At the start, the race director said you could run any distance that you wanted dispite what you registered for.  That means we had the option of the 5K, 10K, or 20K.  Kris announced right then and there that she was doing the 10K.  There was NO WAY she was doing the 20K.  Michele and I decided to wait and see.

The rain stopped right away, but the wind didn't.  We took off for the first dune.  Holy Cow this is hard!!!   After the first dune I stopped to wait for Michele and Kris and looked ahead of me.  It was just dune after dune after dune.  They never ended and each one was taller than the next.  My knee was holding up but I wasn't sure if it would last the whole race.

Here are some pictures to tell the story of these dunes. 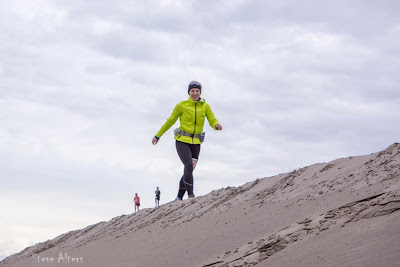 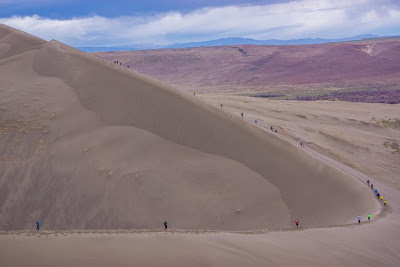 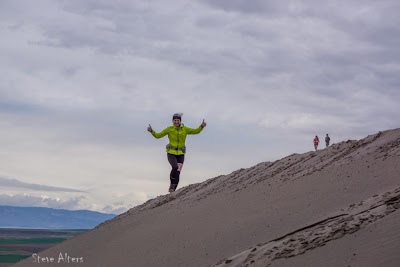 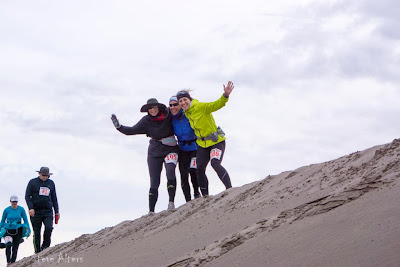 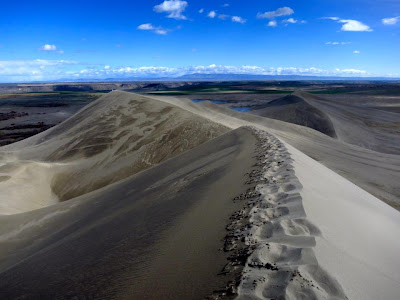 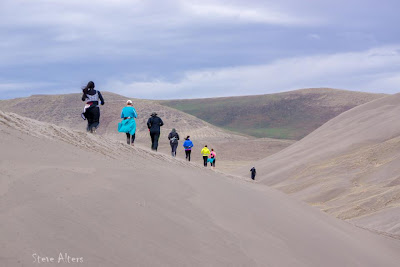 After waiting for Kris to catch up we sang "Happy-Birthday" to Kris as loud as we could.  It was fun.  When we stopped she said, "Oh thank you. Now bury me here." 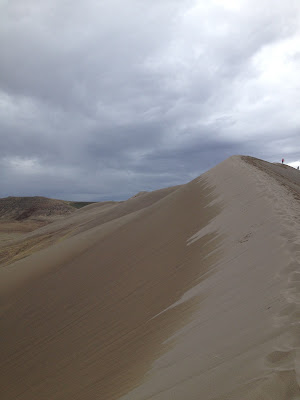 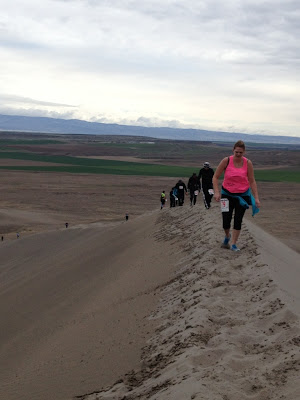 There was this guy we met named Garrett who was doing the 5K.  He ended up right in front of Kris.  He was trying to be helpful and telling her to just step in his footprints.  Kris politely replied, "What I really need you to do is move so I can pass you!" (It goes pink shirt, Garrett, then Kris). 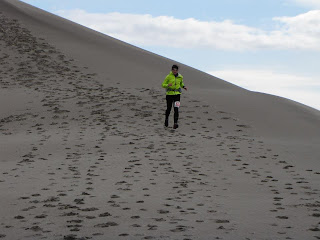 FINALLY, the end of the dunes!  I think we each had about 5 pounds of sand in our shoes!  When we hit this last stretch the dirt felt even harder than pavement.  It kind of hurt at first!  The worst feeling was all that sand compacted at the tip of your big toe! 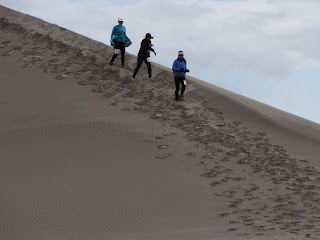 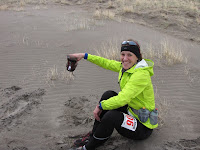 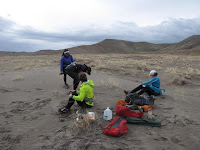 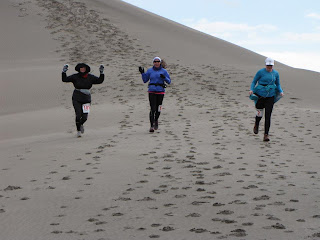 At last!  Now we can run!  Oh how wrong we were.  WE had this "crazy" idea that the next half of the 10K would be a regular trail to run on.  NOPE!  It was more sand!  This sand was soft and you would sink about 6 inches every time you took a step.  This was actually harder on my knee than the actual dunes.  To complete the 20K we would need to do this entire loop twice, including the dunes again!  I knew right away that my injured knee would be worse if I did the 20K, and possibly blow my chances at a PR in the marathon that I have been training for.  Kris was already on board and it didn't take much to convince Michele. The 10K it is!!

So we plugged along.  There were no other runners in sight except for one lady behind us in blue.  The sand was deep and the way was slow but we made our own fun!

This part of the race is called:


INDIANA RYALS AND HER TRUSTY
SIDE KICK FLAMING HAIR!!﻿ 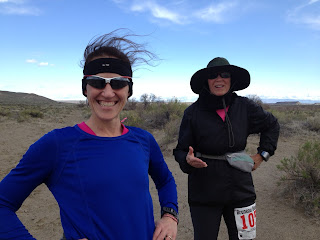 One of our greatest skills, is getting lost!  We were running along and I noticed that there weren't as many footprints in the sand as before.  Where did all the runners go?  Did they just vanish?  Michele also thought that was odd.  Then Kris pointed off to our left and said, "Aren't those the pink trail markers over there?"  Sure enough they were and somehow, somewhere we had taken a wrong turn.  We had to now go cross country to get to the correct trail. We were sage brush hoppin', hole steppin', sand kickin' a good football field length to get back on track.  Phew!

As we turned back to see where we had been, we saw the lone lady in blue.  Guess where she was.....on the wrong trail too!!!  We started yelling and waving our hands and shouting.  But she had headphones in and was looking at the ground.  So, I tromped back cross country to retrieve her.  She was grateful.

Kris said I needed to include the fact the SHE is the one who noticed we were lost, thus saving all of our lives.  Assignment complete.

We came to the one and only aid station on our course.  Two guys sat there looking cold and bored.  We knew we were dead last of these crazy 10K runners.  "What would you say if I told you we were first in the 20K?"  I shouted out.   He actually looked quite impressed.  Then before he could answer I continued, "Well we are not. We are LAST place in the 10K."  and then I laughed and laughed and laughed.  I honestly think that at this point I had crossed into the realm of delirium.  I was so tired and there was so much sand!  And it was taking FOREVER!  I could honestly lay down and take a nap at any moment! It was exhausting!!  But I will say, it was fun!  SO, that must make me crazy.

This was the hardest run we have ever done.  It makes Robie Creek seem like a speed bump!  We were so happy to be able to say we had done it!! 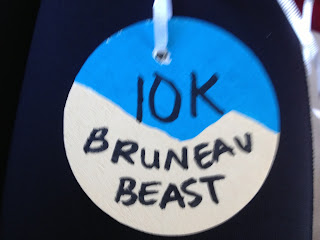 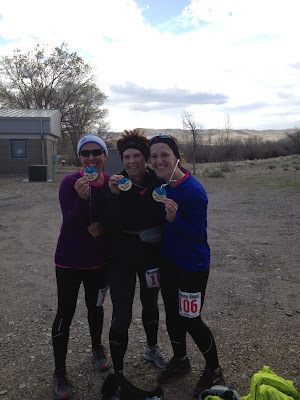 So, when will you find us back on the dunes?  Not any time soon!
Posted by Jodi at 9:00 AM