That may seem like a really strange title for today's blog, but today's trail run was a very strange run.  We both wanted to get a long run on the trails today.  We were aiming for 10-11 miles.  Michele had it all mapped out in her head so I just said, "Yep. Let's go."

We started at the upper parking lot on 8th street.  That way we avoid Camel's Back and jump on the trail right at Owl's Roost.  It is a run we have done before....Owl's Roost, The Grove, Kestral, Crest Line to Sidewinder.  We were doing really good walking the hills, keeping a good pace. 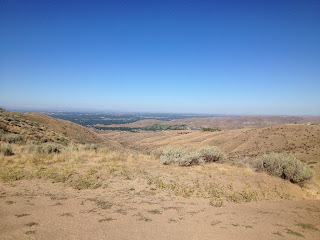 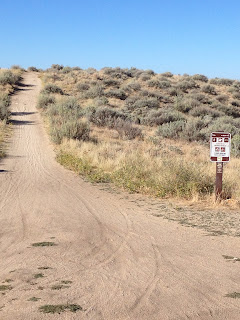 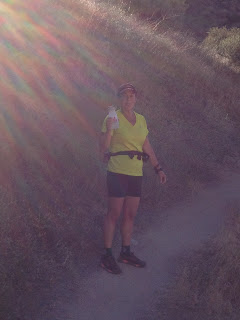 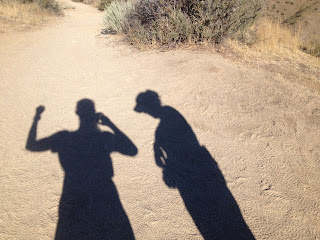 On Fat Tire we came to the "love rock" corner.  There seems to always be a different design there.  Last time it read something about loving to ride bikes.  This was spelled out with small rocks.  Today it was back to just a simple heart.  I wonder who does this all the time? 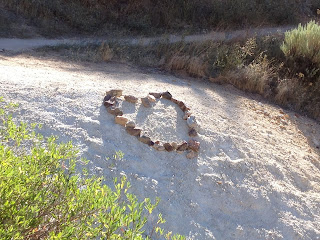 As we came out and started to head down towards Mtn Cove Road, I began to notice some REALLY LARGE animal prints.  We finally stopped to check them out.  Yep, just what I feared.....BEAR! 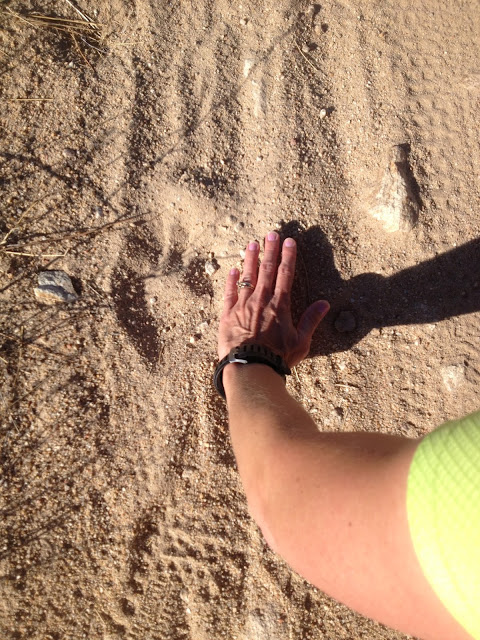 We ended up following these bear tracks for 3 miles!  Just when you thought they were gone, BOOM!  There they were.  It was getting a little bit unsettling, especially when we ran through areas with thick sage brush where a bear could hide.

As we ran down the hill where Les Bois 10K race is held (still following bear tracks) we started to hear the firing range.  There was a lot of action going on there today.  So now, I not only had to worry about a bear eating me, I could now add risk of being shot to that list!

It didn't help when as we rounded a corner Michele cried out and jumped towards me.  She thought she had seen the bear.  Okay this was getting to be too much!  It was as if Armageddon was here.  Bears, Bullets, what next?

We tiptoed passed the firing range.  For some strange reason the guys shooting were only standing a few feet from their targets.  Michele kept wondering aloud what the possibility of a ricochet was!  This was not helping my nerves!!!

When we hit the connector to head back into the Camel's Back Trails...the bear prints ended as well.  Hallelujah! No more bears and no more bullets!  We did however come upon something else equally as dangerous.....bikes!  There were a lot of bikers out now and some of them were going fast!  We had to jump out of the way more than once to avoid getting run over by a speedster around some blind corners.

We hit Crestline and headed to Red Cliffs, almost done.  Red Cliffs is a popular bike trail so I knew we had to pay attention.
"I will look out for bikes!"  I called back to Michele.  But then what I saw coming really puzzled me, "Or.....Unicycles?" I added.

Sure enough coming up the trail as a man on a unicycle. 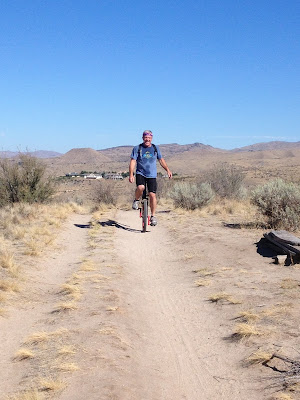 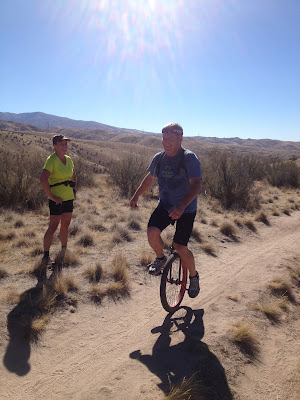 This is definitely something you do not see everyday, if ever!  He was a really nice man.  We chatted for awhile.  Amazingly he is 58 and had planned a 6 ish ride today on the trails!! Incredible!!  It really made our day!

Smiling we finished our 11.24 mile trail run for the day.  We were sweaty, and I really stunk, but we felt good!  Time for some Jimmy John's to celebrate!