Today was AWESOME!!  It does not happen very often that a trail run becomes so enjoyable and easy that you don't feel like you've ran as many miles as your Garmin says.  Today was one of those days!!

We are signed up to run the Adalpe Challenge in a few weeks and that means the dreaded training runs on Rocky Canyon Road.  I wanted to only do ONE and no more.  Michele thought maybe two.  UGH!

So we parked where the pavement turns to dirt.  This is a good place to park, lots of room.  However, there was a creepy van parked there.  You could tell that it had been there over night.  I wanted to get this run started quick because I was worried who or what was in the van!  When I started to smell cigarette smoke coming from it I was done waiting....."Let's Go!!!"  And yes, I had my pepper spray today...phew!

The climb wasn't so bad, in fact it was strangely easy.  Our plan was to run to the Three Bears Trailhead.

Michele and I tend to get these ideas for routes and then we just run them.  We don't map them out, we don't check possible mileage or anything.  We just go.  So neither of us were sure how long it was to the trailhead.

I have run Three Bears once and it just about killed me!  Of course that was also when I first started out running.  This time we were coming down three bears the other direction and I LOVED IT!!  It was such a wonderful run!

We climbed quite high and at the peak we had an amazing view of Rocky Canyon Road. 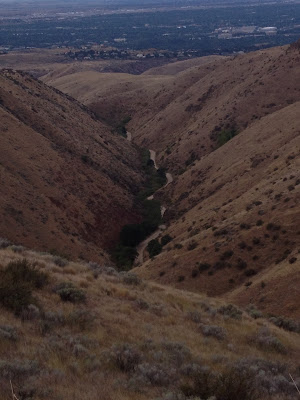 When eventually joined Shane's Loop and then hit the fork to return to Rocky Canyon Road.  We were only at 5.52 miles and we both felt amazing!  It was a great loop that ended up being 6.56 miles!  I felt like I had only ran 3!    This may be my new favorite loop!!
Posted by Jodi at 8:24 PM