Well, normally when you have MAJOR surgery the doctor tells you no lifting or other activity for 8 weeks.  Then you are allowed to begin to do LITTLE things over the next couple weeks.  By 16 weeks you should be feeling recovered and then start run/walking again.  So.....my MAJOR surgery was 17 weeks ago.  What did I do to celebrate?

Why not?  Michele and Kris had signed up for the Aldape challenge early and were always talking about it.  I opted no too because I felt I wouldn't be recovered enough to train for it.  Then a couple of weeks ago I decided to just DO IT!  I could use it as a fun trail type training run with my Sole Sisters.  Hmmm........ 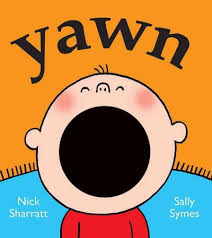 Oh man was I tired! As I headed down my hill, 3 deer bounded across the road in front of me.  Slamming on the breaks quickly woke me up!

As we Sole Sister's were piling in to Michele's car Kris had already told me to "shut your face" twice.  She was really in rare form.  It was actually about something that the race officials had put in their email:
We had a good laugh about it and mentioned that Kris better put an "X" on her race bib.  Her husband said that it didn't apply for mental issues!  You may think we sound mean, but you'd have to meet Kris and then you would see that we are not! 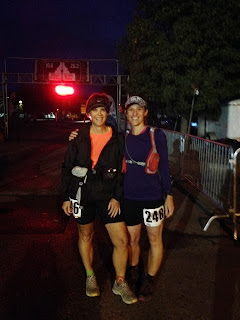 It was easy to get a place to park and take a bathroom break while we waited.  Michele told Kris that if the handle was green then you could go in.  So Kris opens the door and SURPRISE!  There is man inside!  WHOOPS!!

When I come out I head over to wash my hands.  Michele is standing there and yells while holding up her hands, "No here take some of mine I got too much!"  I head over and take what I think is hand sanitizer from her.  As I rub my hands together I realize it is NOT.  "Michele, this is SOAP!"  Oh boy, I am a tad worried about those two today.

Kris debated for 15 minutes on what exactly to wear.  With 5 minutes to the race start she sent Michele running a jacket back to the car for her.

We start off at the sound of a blow horn.  We all decided to take the first mile very easy and slow.  We just ran along laughing and really enjoying ourselves. 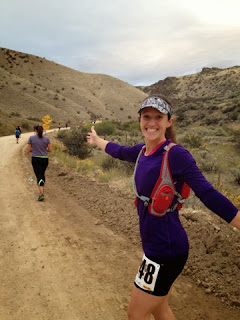 By mile 4 Michele says I am pushing her too much and need to leave her and run my own pace.  I was feeling really good and decided to push it a little.  I was still not racing though, it was too soon in my recovery for that!!

The climb to the summit was longer than I remember it being, Michele said she felt the same way.  When I finally reached the top I was SO relieved.  It had been a tough climb.

My summit time was 1:38 which was 3 minutes faster than when I ran Robie Creek in the INFERNO OF STUPIDITY last year.  The weather today was cool and breezy.  So when you reached the summit, you felt like you could continue to run.

As I tore down the summit I eventually passed Michele.  She yelled to me, "I've been worried about you!  You are the 24th female!"  What?!?!  I was not supposed to be racing, why is she counting people?  She later confessed that since she had not seen me in the top ten women she thought I was injured sitting at the top of the summit. So now I began to wonder.......should I push the pace?

Once you hit the summit you have run 8.3 miles UPHILL.  The reward?  You now get to run DOWNHILL!!!  I was so excited I was grinning for a solid 2 miles.  Michele said she did the exact same thing.  As I ran down grinning with joy I saw Kris coming up the hill.  She had her head down.  I started to wave and try to get her attention.  When she didn't notice me I start running right towards her.  A few runners gave me strange looks as I charged down the hill right in her path.  She finally looked up.  I waved and we high fived each other!

I was so excited when I finally was nearing the finish line.  I had pushed pretty hard and the last 3 miles on the pavement was KILLING me!  I had the strong desire to walk many times but I dug deep and trudged along.  Finished in 2 hours 48 minutes.  I ended up in the top twenty of all the women racers, 19th place.  I guess I ended up doing a little racing after all.

My next job was to watch for Michele.  I knew she was probably about 20 minutes behind me at the summit. I saw her purple shirt coming down the road.  YAY!!  She finished at 3 hours and 4 minutes.  She was only 16 minutes behind me...SO AWESOME!!

We went over to watch for Kris.  We were about at the .75 mile mark.  When she saw us she yelled, "Never again!!"  This surprised some spectators but we just laughed.  She came in with me screaming her name at 3 hours and 22 minutes.  She was only 18 minutes behind Michele.  SO COOL!!!

We had a good time as we always do.  It was a fun race, but not one that we need to do again. 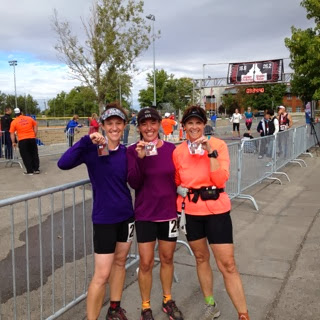 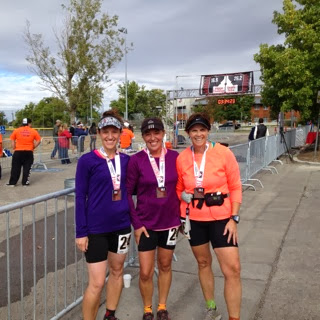