For our next adventure we decided to run the "Run Wild Idaho" ultra run.  We selected the 16 mile option and Kris agreed to join us, reluctantly.  Her wonderful husband agreed to drive us to the race start.  None of us were sure if we would be in any shape to make the 2 hours drive home after we ran.

Everyone was too busy to get to early packet pickup a few days before the race.  So my husband offered to do it on his lunch break.  It turned out that you got to PICK your race number.  He chose the numbers 1,2,3.  Of course since I am his "number one" he assigned my name to #1, then Michele #2 and Kris #3.  Kris was mad and said that SHE should be Number 1.  I admit it was fun to rub it in.

We had to leave at 5:30 AM.  We sleepily made our way to the race.  Kris was mad because there was someone else signed up in her age group.  She originally was the only one.  That was why she agreed to run because she could say, regardless of her time, that she WON her age group.  Then during the last week of sign ups, Sparkle Paterson signed up.  Kris wanted me to point her out so she could try and BEAT HER!!! As we pinned on our race numbers... I saw Sparkle. 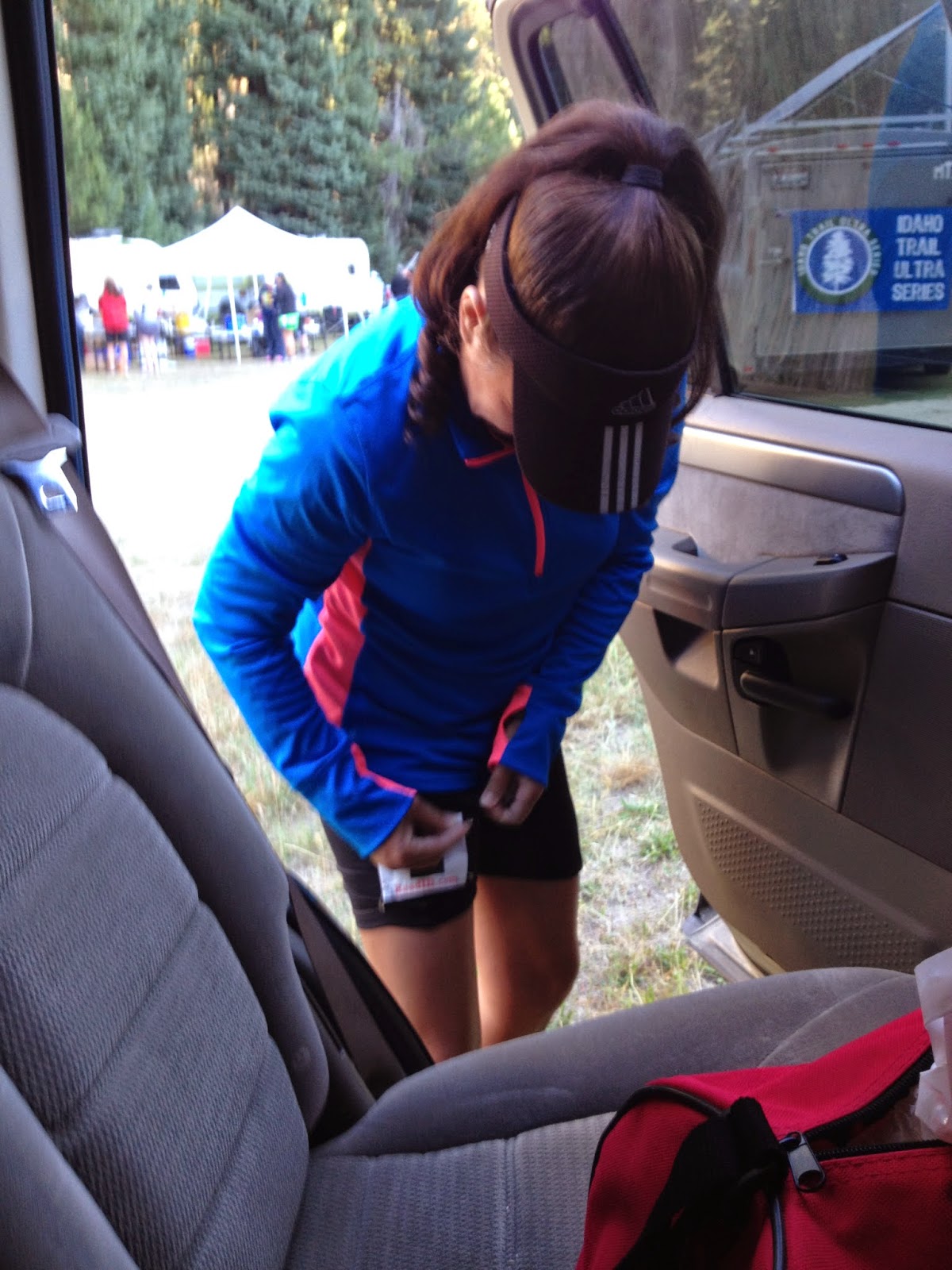 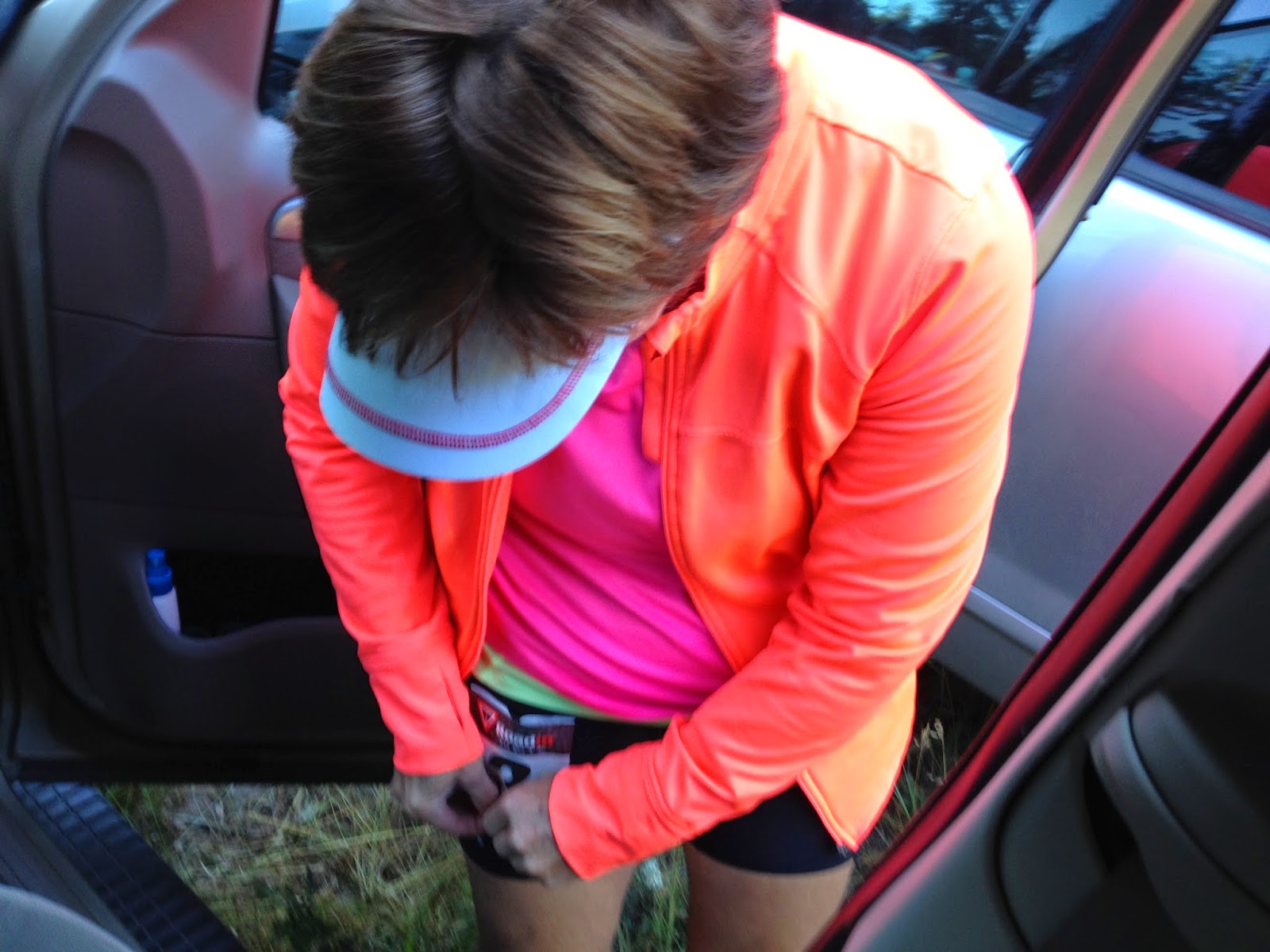 Michele ran over and introduced herself and told Sparkle all about Kris' secret desire to beat her.  They became instant friends!! 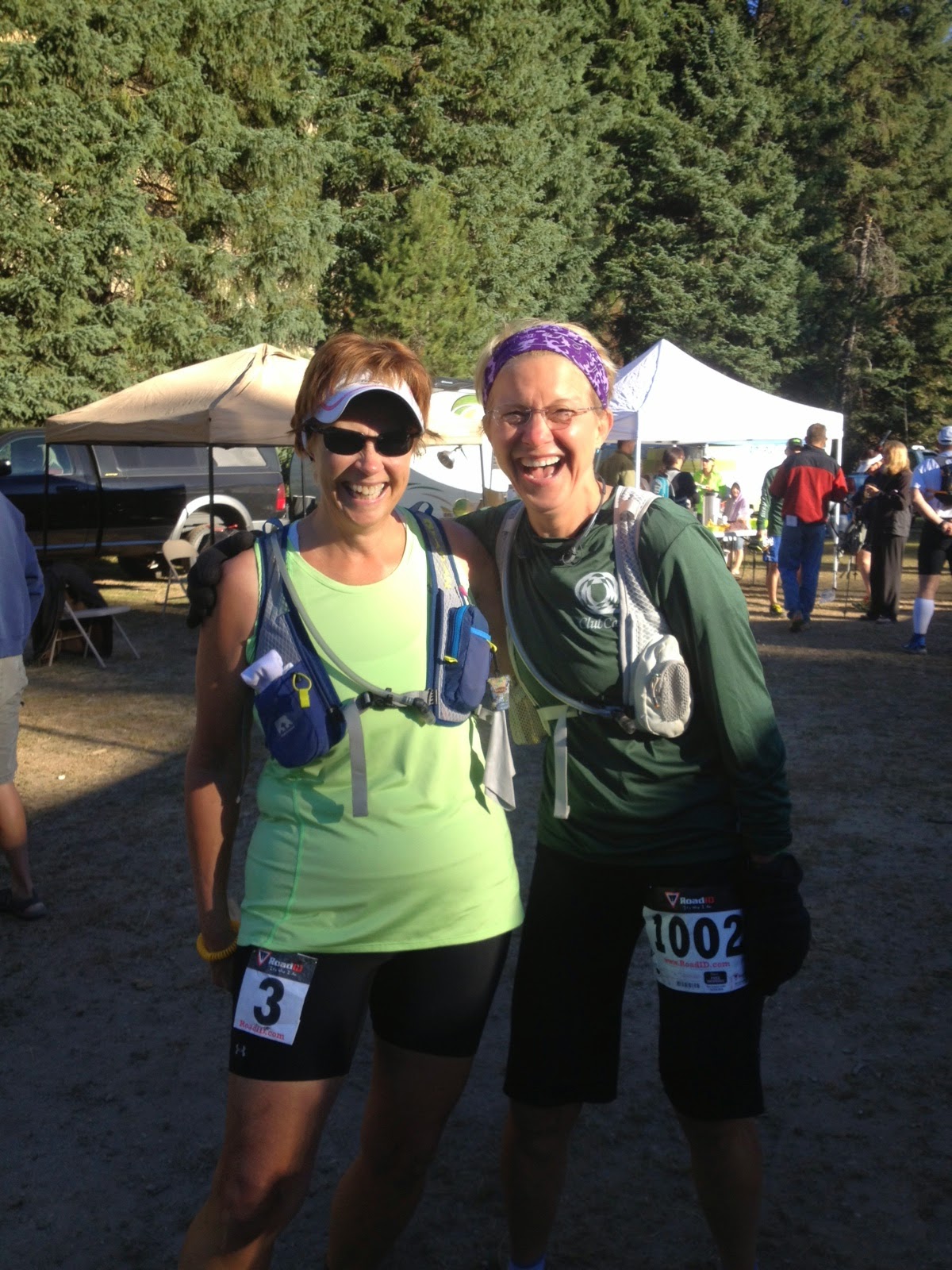 Before the race began we had to help Kris with her indecision as to what to wear.  It was a cold start but we also knew it was going to get hot, very HOT.  She wanted to wear a long sleeve layer but was worried about stopping to take off her pack in order to get the shirt off.  This was her solution: 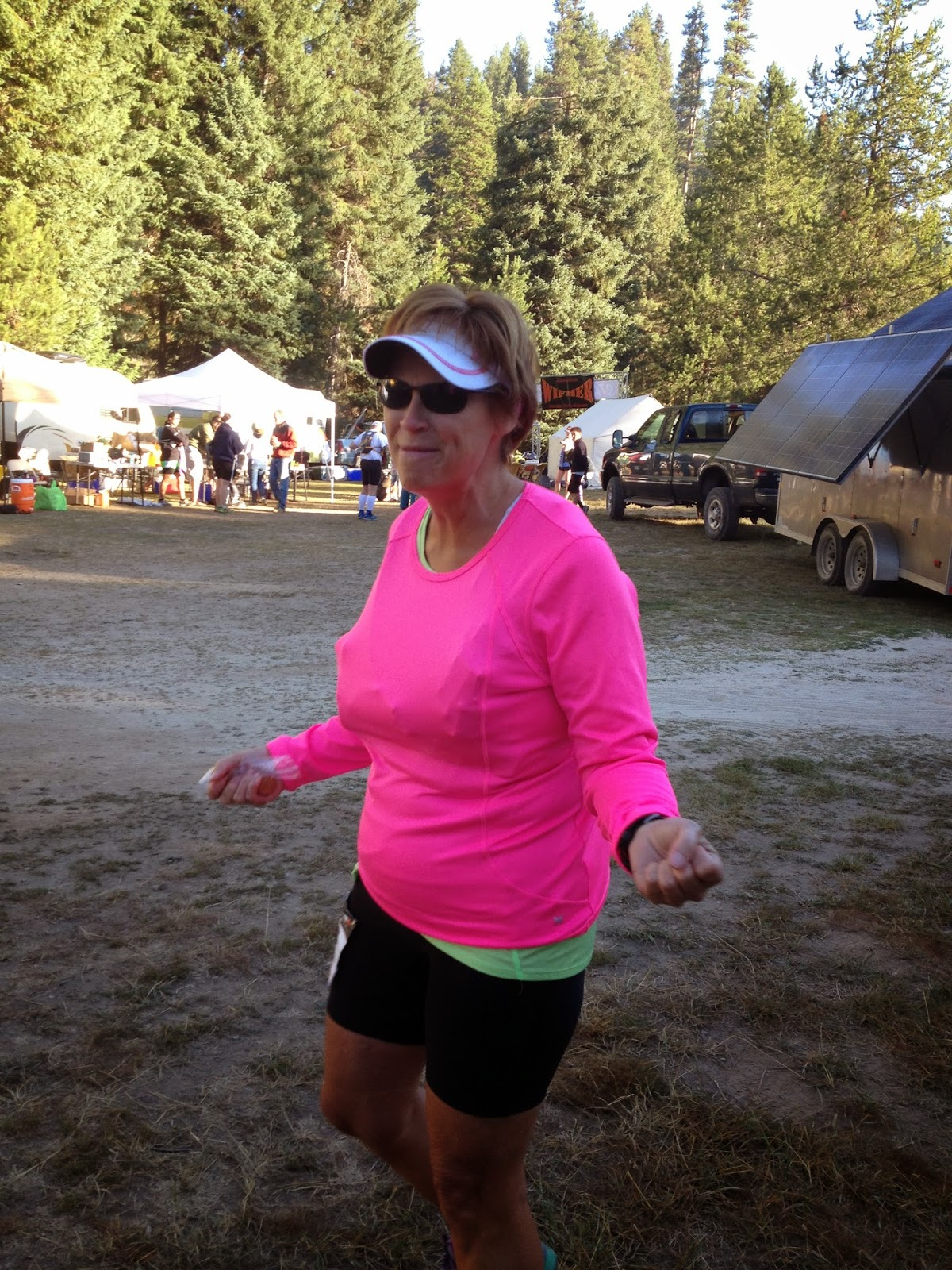 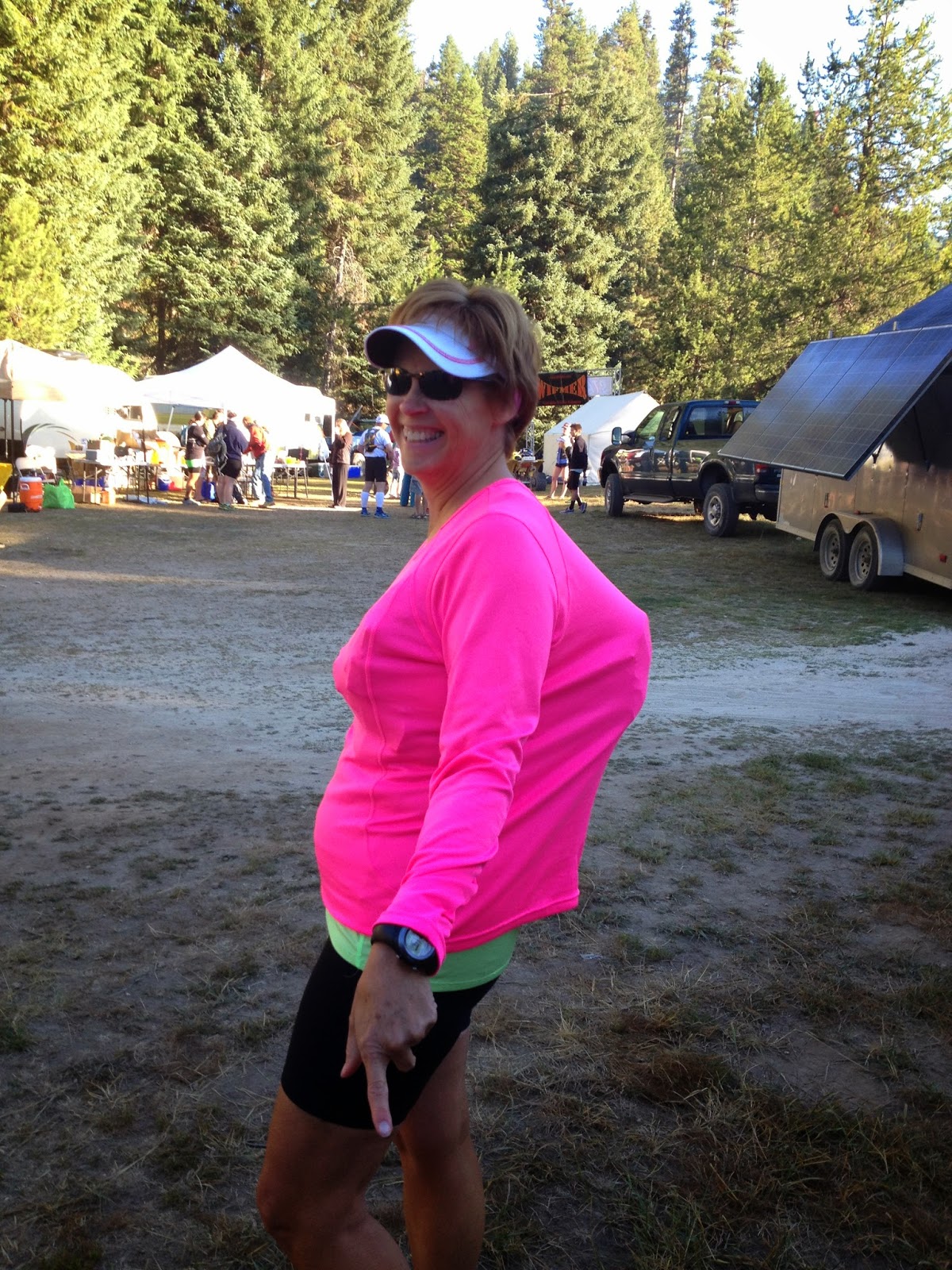 That got a vote of "NO" from both of us.  In fact I told her I would pretend I didn't know her if she did that and Michele said she wouldn't run with her!!  Kris ran in her tank top and was never cold :)

I had felt so good in the last week of training leading up to the race that I decided I was going to run fast ahead of them!  Sometimes I do this.  So when the race started I took off!  I realized I had NO clue what the course markings were.  When I passed the race director I asked what color of flags we needed to follow; he replied with a smile and no directions.  Well, here is to not getting lost!!

For the first smile I ran hard.  I was in third place overall and the first female.  WOW!  That wow quickly turned to "I think I am going to barf and my calves are going to fall off.  Not sure which will happen first!"  I had foolishly started on an uphill course, with cold muscles, going at a faster pace than I should have.  So......

I stopped.  I turned around and started walking back DOWN the trail.  I will admit I got some strange looks from the other runners and an "Are you OK?"  Yes, I am ok.  I just ran extremely dumb. I only had to walk a few minutes before I saw Michele and Kris.  They both looked concerned and asked, " What's wrong."  My answer was simple, "If this race is going to be as hard as I think it is, I don't want to do it alone." 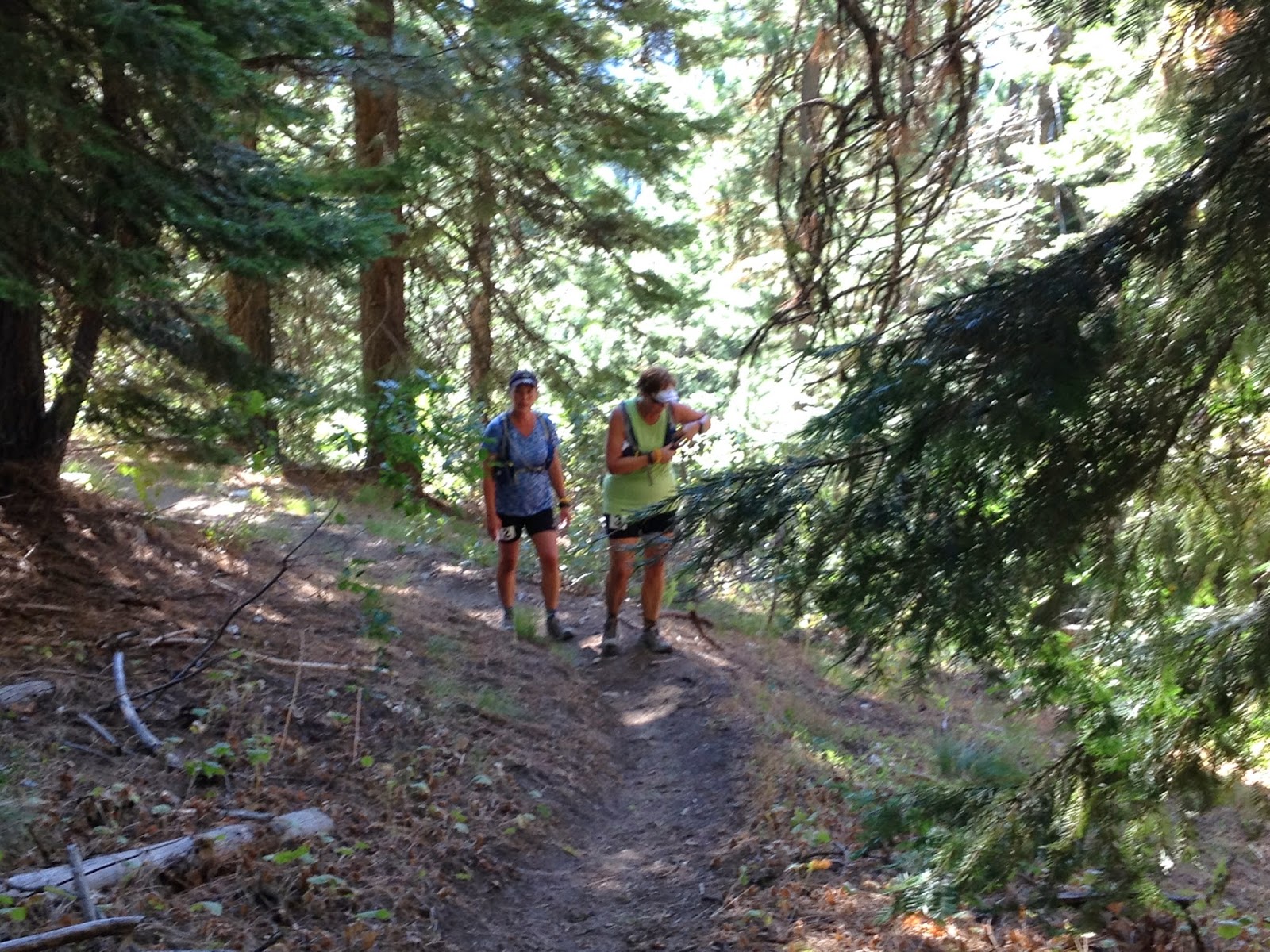 To say that this race was tough would be a flat out lie.  This race was extreme, mondo hard, leg screamingly intense!!!  It was nearly impossible going up and deadly going down!  After about three miles our orange ribbons that we had been following suddenly tuned pink.  We were sure we had gotten lost somehow and now we were following the 50-miler course.  We stopped a few different times trying to decide what to do.  At one point I even yelled, "Are there any runners out there?" Receiving no response.  Finally the consensus was made that we would simply run/walk/hike for 8 miles.  Then if we did not reach the Aid station Turn around (because we were lost) we would turn around and come back.  Creating our own 16 mile loop. 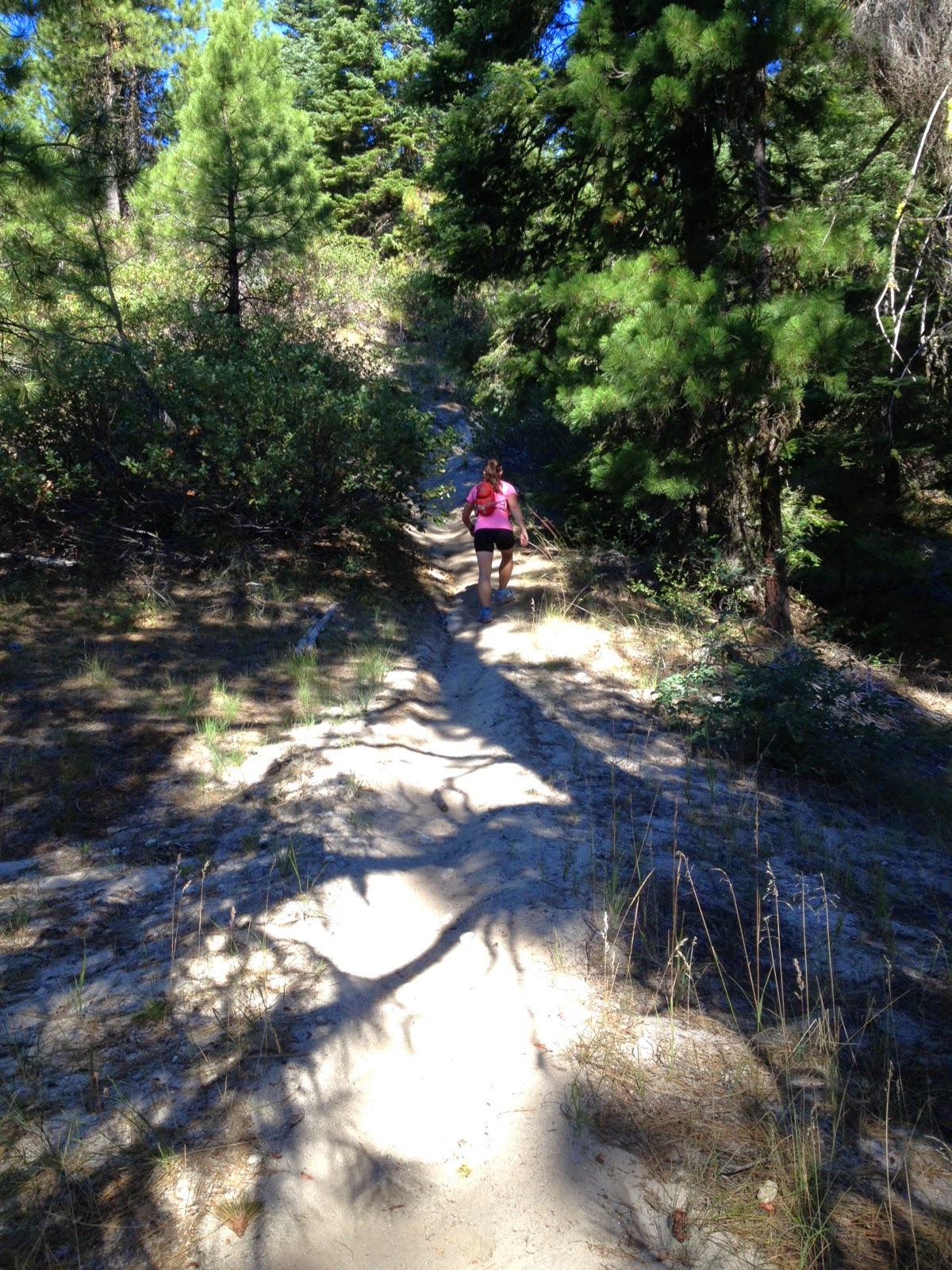 Luckily, we were not lost and came upon an Aid Station.  HOORAY!!  Onward!  Well it was more like UPWARD, because at that point the trail went STRAIGHT UP for 2 miles.  We had to find sticks in the woods to use as walking sticks....it was that steep!! 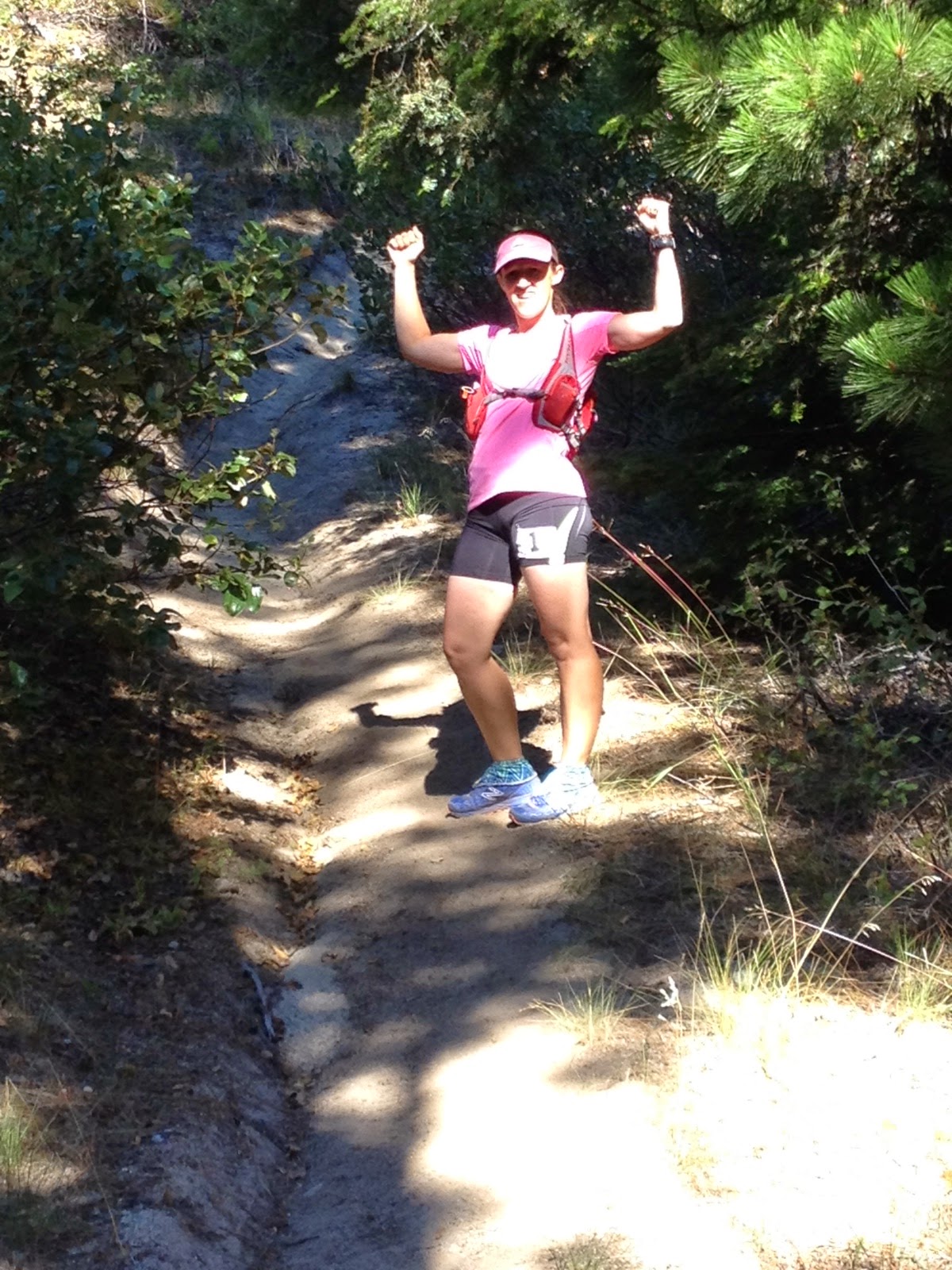 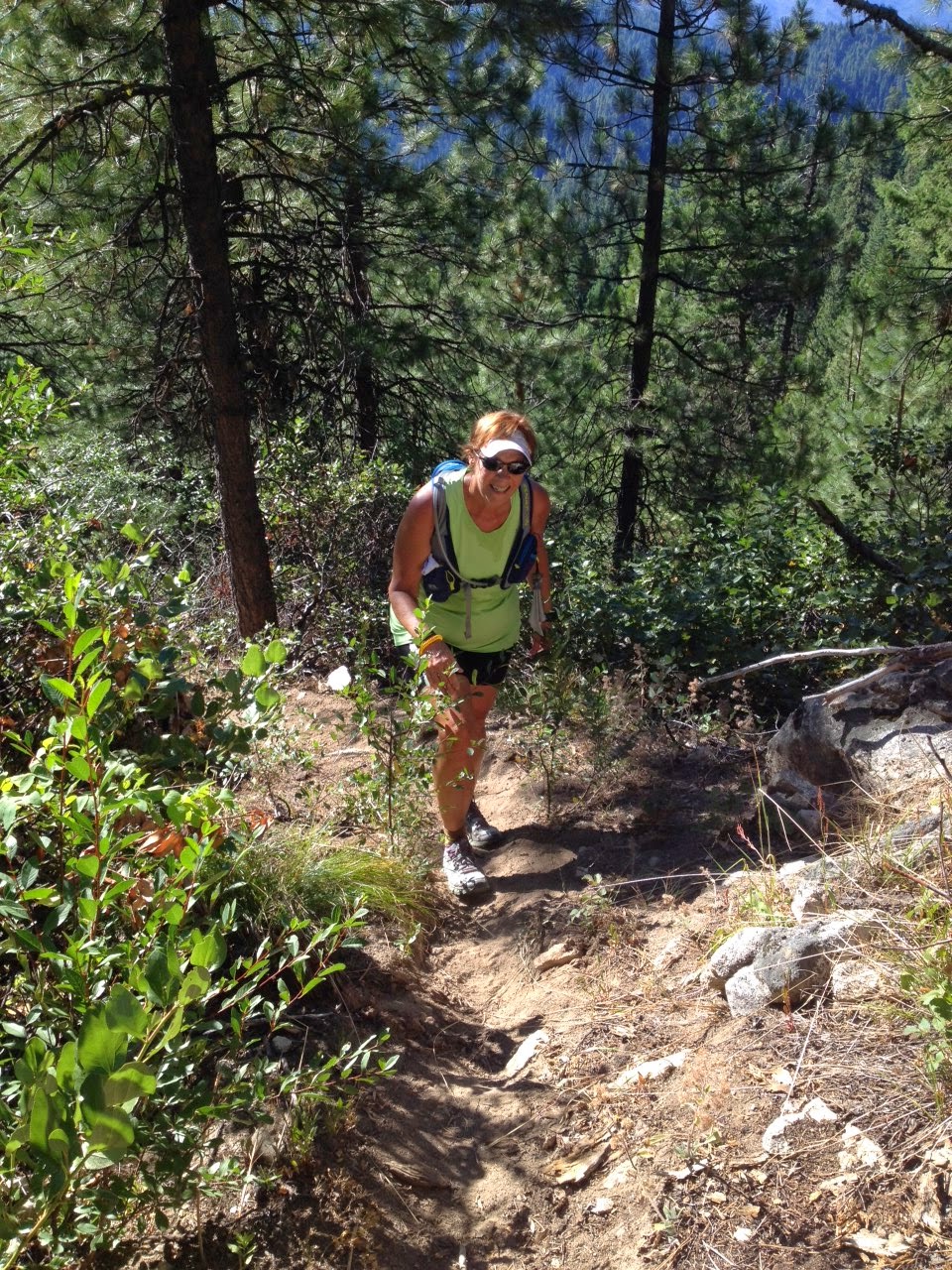 After 3 hours of climbing we reached the Aid Station/ Turn around point.  The workers there were rock stars!  They were so helpful and attentive!  Michele and Kris drank Pickle Juice (gross) and I had a shot of Coca Cola.  We ate some Watermelon (tasted like heaven!)  It was time to descend the mountain.  I looked at my dear running buddies and said, "I will see you at the bottom."  Then I was gone.  Kris had to sit down to get the dirt out that had been collecting.  They decided to stay together.

I think I yelled at least 3 or 4 times at people as I came up behind them going down the hills, "I am coming up behind you FAST!"  That was my warning to let them know I was going too fast to stop. Most of them were really nice about it.  When I got to one of the REALLY steep slopes that we had a tough time climbing up, I realized too late that I was going too fast.  I could not slow down!  I felt myself beginning to lose control and knew I was about to eat dirt BIG TIME.  In desperation I reached out and grabbed for anything that might slow me down;  pine tree branch.  That did the trick.  I held on as I slid.  Then the branch broke off.  I slid the rest of the way down (luckily on my feet) while still holding the broken branch in my hand.  Wow that was actually fun!

The last few miles down the mountain were hot.  The temps had increased greatly and the shad was non existent.  You could really feel yourself getting overheated.  This is where races are more mental than physical.  You had to really get out of your own head at this point in the race.

I finished the race in 4 hours 29 minutes.  Holy cow!  This was only a 16 mile race, so that finish time seriously indicates how tough this was!  I was proud of my performance since I passed 10 people on my way down the mountain.  Kris' husband was there at the finish line with a small slushy Coke for me!  I stood in the river for a long time with my coke waiting for my feet and legs to just go numb. 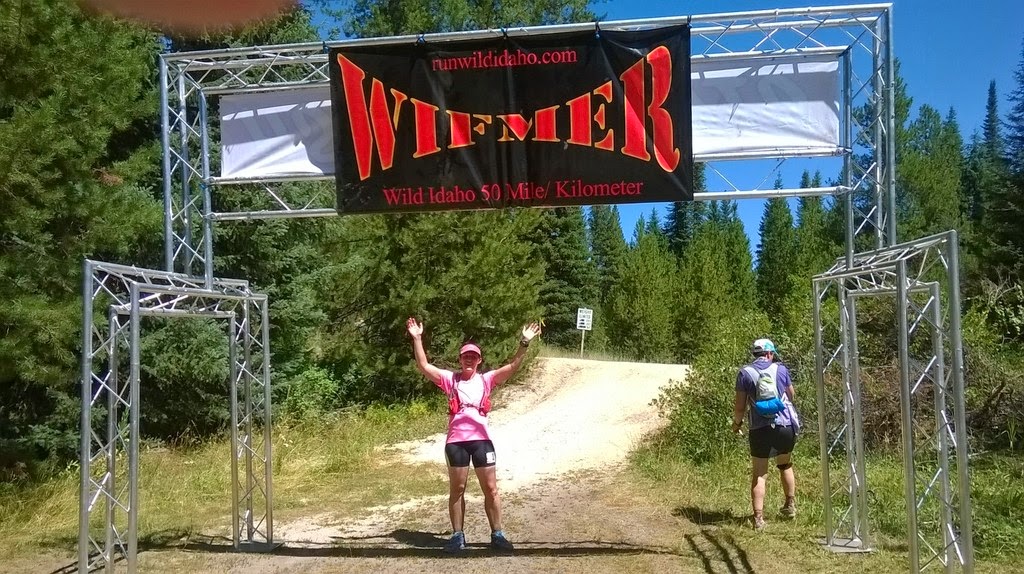 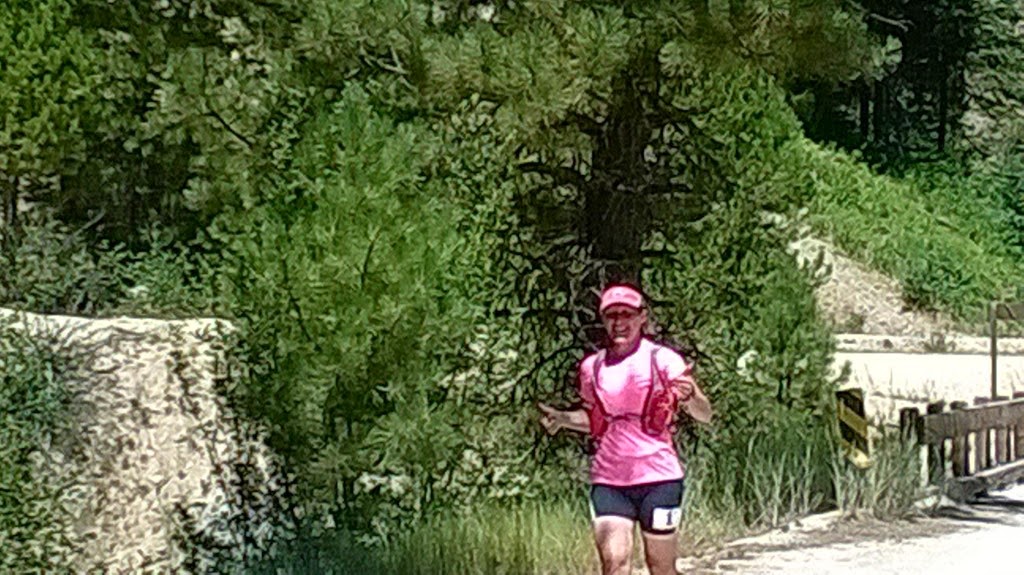 Michele and Kris came in about 45 minutes later at 5 hours 11 minutes.  As we stood there cheering for them I noticed, Kris only had ONE SHOE ON!! Turns out she had a horrible blister pop and it was so painful she took her shoe off and finished the last 2 miles in a few socks only! 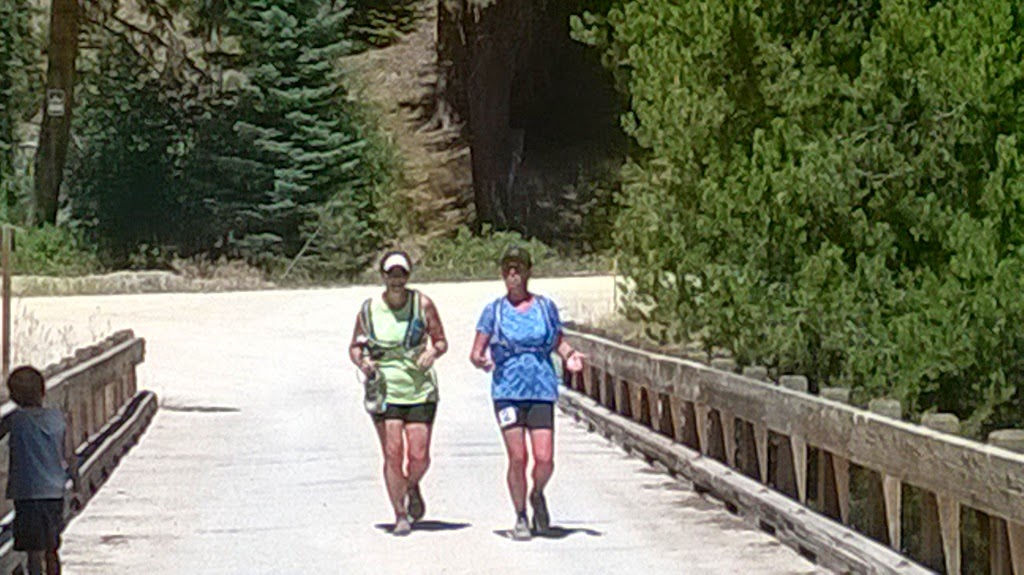 This race was HARD; MONDO HARD.  Definitely the hardest I ave ever done.  It was four days after the race before any of us could walk without grimacing.  But I am glad we did it!  Kris however informed me that this is the last Ultra that she will run with me again, EVER!

(My age group is too competitive.  I will be 40 in a couple weeks, then I will be in Michele's age group! YAY) 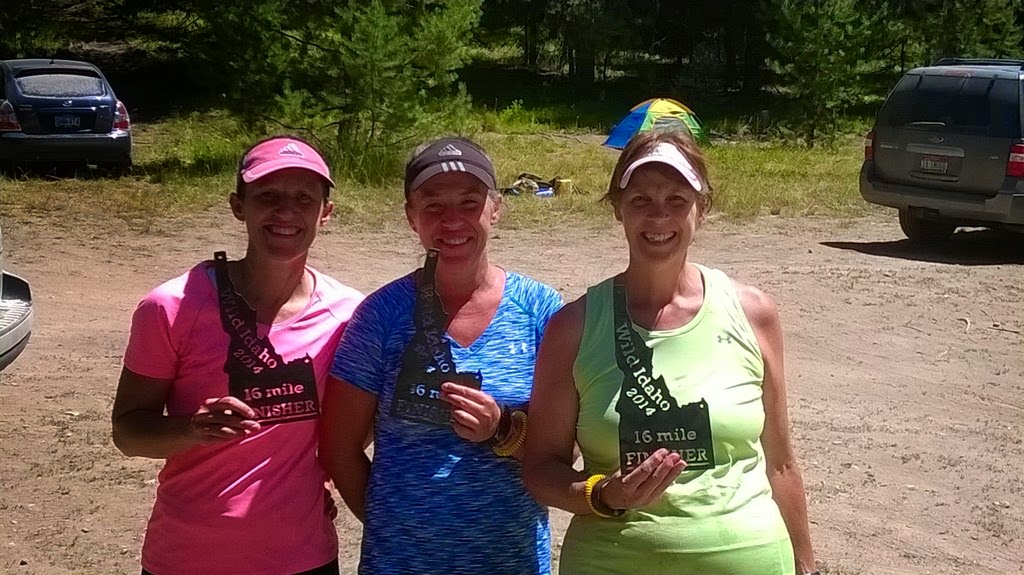 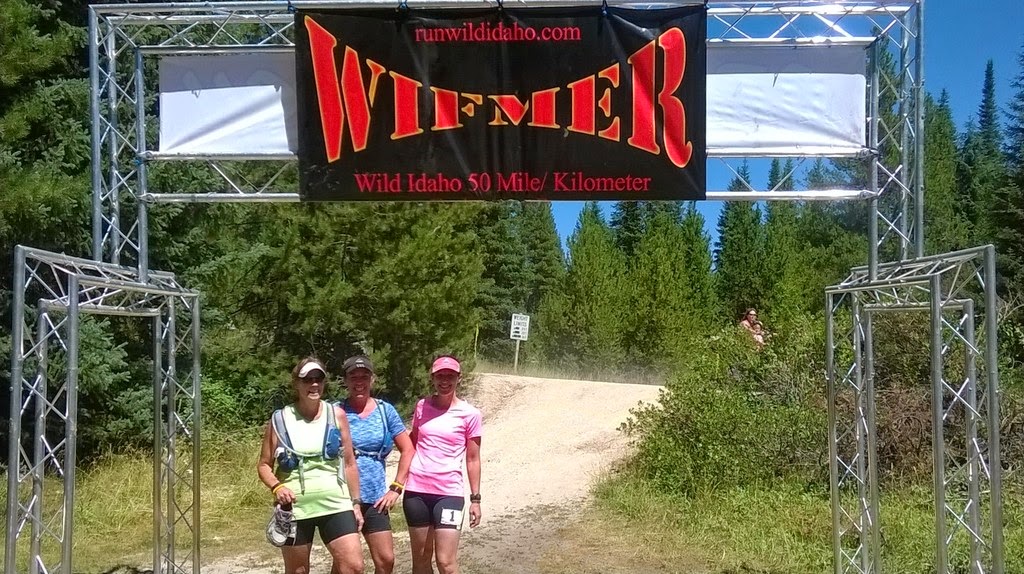 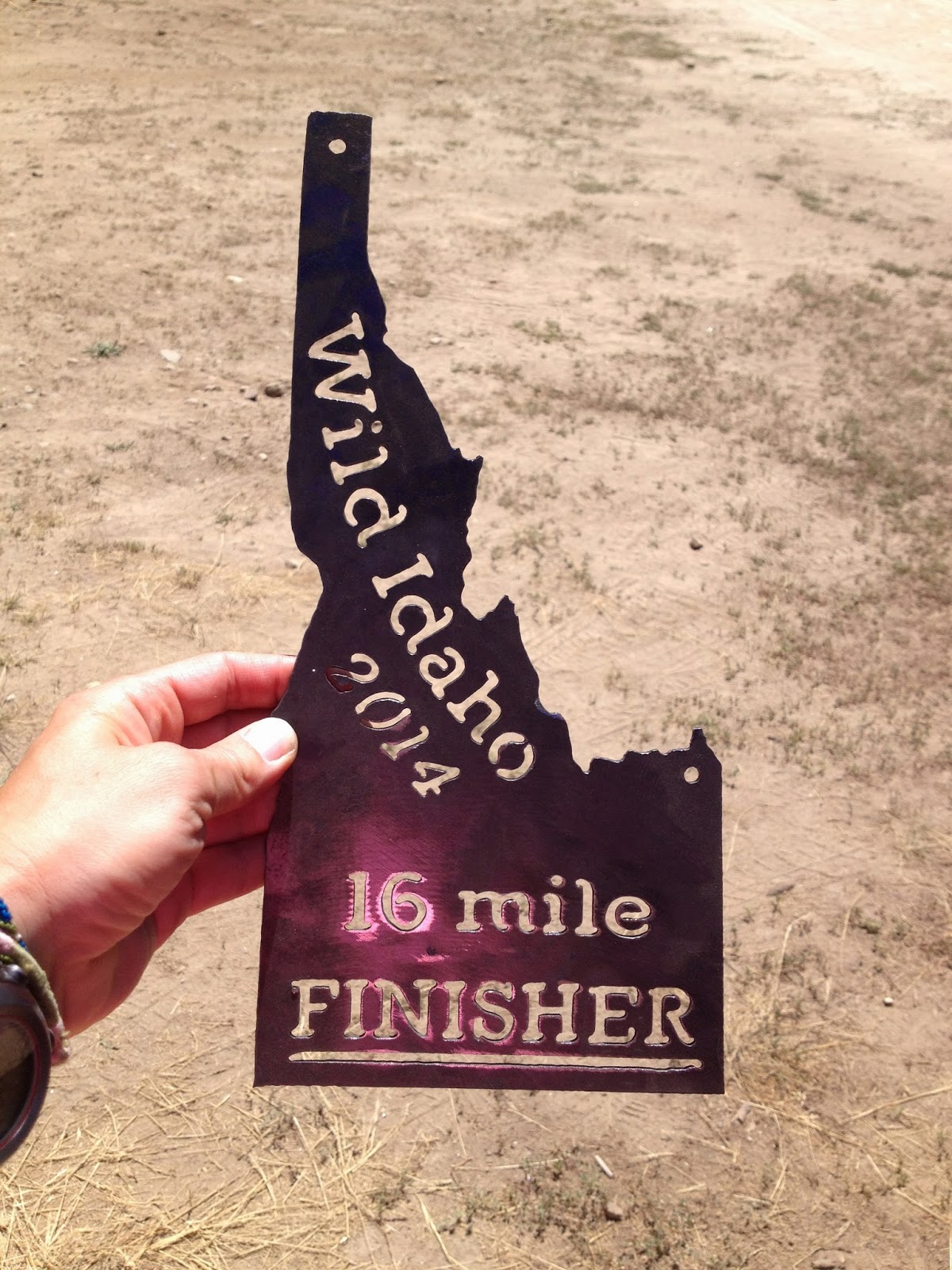 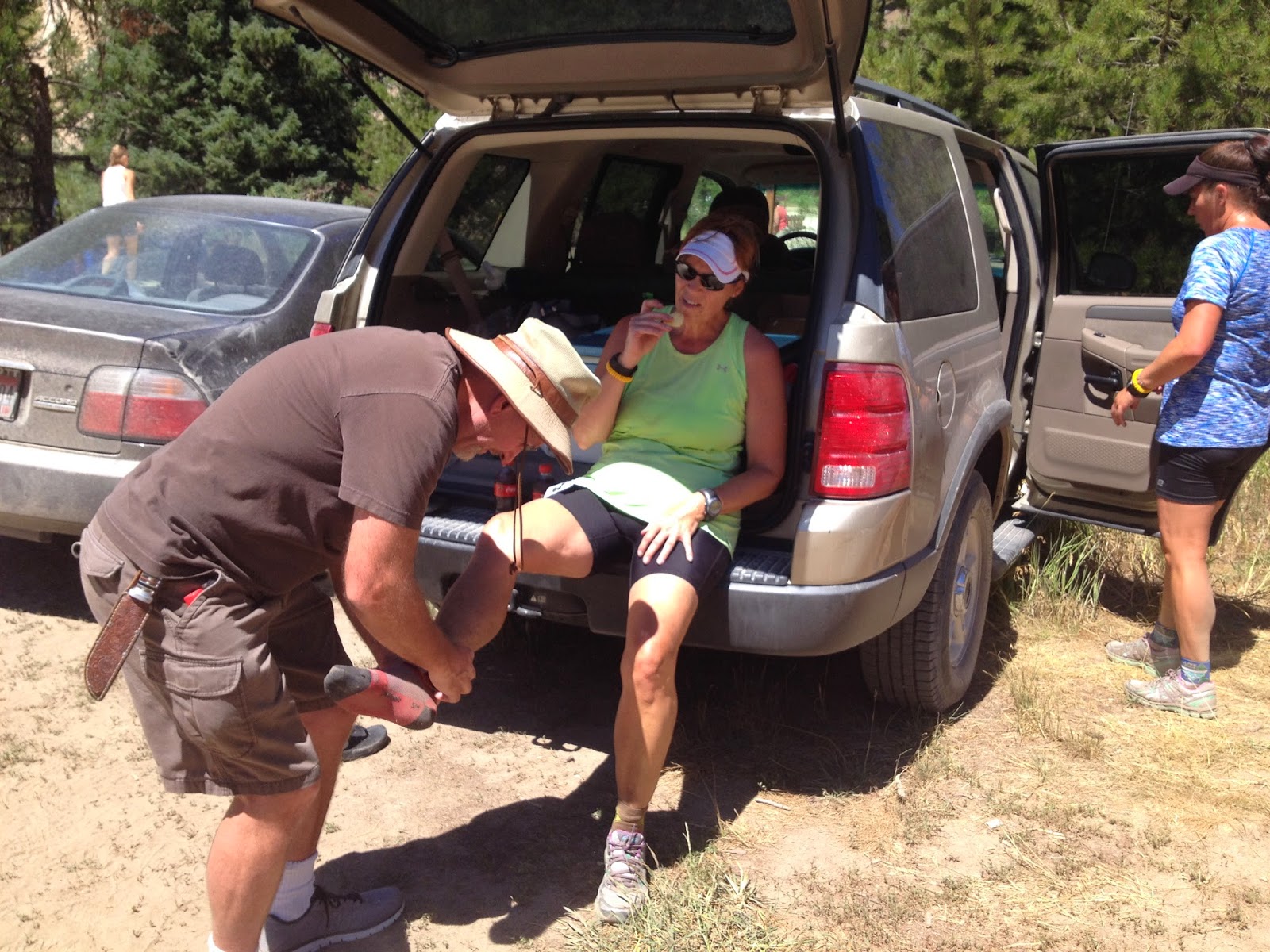