A day on the Trail FINALLY!

I have been sick for a couple weeks and my running came to a screeching halt because of it.  Michele mentioned that my body could probably use a bit of time off since I have been training so hard.  My goal is to run a sub 4 hour marathon in May and I have a friend who put me on a very intense training schedule.  But, sick is sick.  So, 2 weeks off happened.

This week I finally felt like myself again.  I have desperately missed running the trails, mostly because I enjoy running with my sister and Kris so much.  We scheduled a trail run for Monday morning.

Wouldn't you know it, my daughter got the stomach flu Sunday night!  Before I am a runner, I am a mom.  So I didn't get a chance to join them.  No worries, we will run again Wednesday, Michele decided.  Michele and Kris still did go trail running Monday though.  I heard about it afterwards from Michele.

"Wow, Kris is in peak running form.  She was like a machine going up those hills.  She kept chanting, Where's Jod?  Did she chicken out and was afraid to run with me?"

"Really, I said.  Well bring it on!"  And so a healthy trash talking, mud slinging, war via texting began.  "This is War!" I texted to Kris.  "Bring it on!" She replied.

The day of our run Michele said her husband gave us 6:1 odds, but wouldn't say who it favored.   I knew, and I planned on making Steve a pocket full of money.  We headed off to run the Seaman's Gulch Trail loops since Kris had never been there

Interesting FACT about this trail system.  I know someone who ran this loop alone one day because her sister was sick and her neighbor was working.  She got bit in the butt by a dog!  True story.

Anyway back to the trails.  Kris was like a race horse waiting for the bell.  She was rearing to go.  Michele yelled "Go!"  Kris took off, but I didn't.  Why?  Because Michele had me in a death hold and wouldn't let go.  Sabotage!  But funny!

The run was competitive but fun!  I would hit a trail marker post each time I passed it and yell out "DING!" because I hit it first.  Kris would play red light green light with me, although I didn't know she was doing it at the time.  Every time I would turn around to check on her she would start running.  When I turned back and looked ahead at the trail she would resume walking. 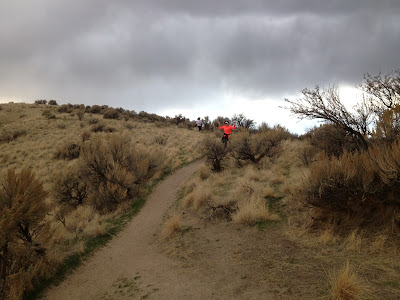 After 2.7 miles I declared myself the winner!  A told Kris she needed to concede.  Se yelled, "I will not concede to the CONCEITED!"

As we headed into the last mile, I just let Kris run on ahead.  My wisdom had kicked in while hers had failed.  I knew I was faster, I knew I had won.  I was ready to now to enjoy some time with my sister. Up ahead Kris came to a fork in the trail.  "Which way?" she screamed.  Michele and I laughed and we didn't answer.  "Which way?" she screamed again.  And I mean she was literally screaming!  Michele and I laughed again and still didn't answer.  After a third scream at us she finally headed right.  The funny thing is, you could go either way.

That is when my competitive streak kicked back in.  BOOM. I took off.  I tore down the trail.  Slowly I watched her come into view.  I could tell I was gaining on her.  A quick glance at my watch, 6:50 pace, I can maintain this I told myself.  I was getting closer then on the next turn, BAM there she was!  As I came up behind I called out in a man voice, "On your left"  She stepped aside and I did  a wicked victory laugh as I blazed by.  She held up her hands and called out "I'm out." Victory was mine as I knew it would be. 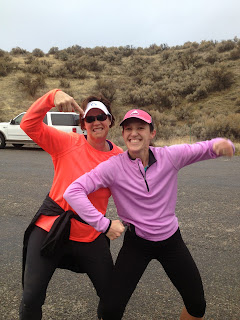 So, it turns out that she didn't say, "I'm Out."  She had said, "I fell."  Ooops!  I would've stopped if my hearing worked.  But apparently when running that is another malfunciton that occurs, inability to hear others clearly.  Luckily she was okay.  And she did finally concede my victory!

It was a good day on the trails considering I struggled identifying my left versus my right.  Michele's neck was grinding like sand paper every time she turned her head. And Kris, Kris was her usual wonderful self! 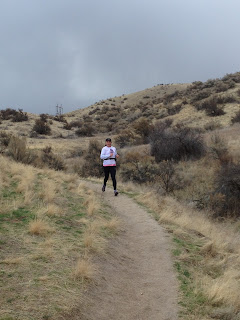