We are so close to completing our goal of running all the trails in the Boise Ridge to Rivers Trail system.  Today's run was to mark Bob's Trail off of our list.  The thing about Bob's is that it is difficult to find a pleasant way to make it a loop.  I say pleasant because I don't particularly want to run 8th street extension if I can help it.


We drove up the 8th street connection and parked at the winter gate.  The gate happened to be open, but it isn't supposed to be at this time o the year.  We opted to park there because we both felt that knowing our luck, if we drove further, when we came back we would be locked in!

We only had to run a tiny bit before we turned onto the Corrals Trailhead # 31.  This part of Corrals is one that I really do love. It is a perfect surface with no real steep ups or downs.  We weren't on it very long when it was time to turn onto Bob's #30. 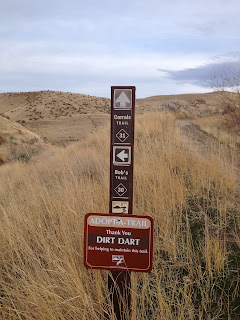 I LOVED this trail.  We were cruising along loving every minute of it!  I stopped to show Michele some really cool neon green moss on a rock.  Then I exclaimed, "I am going to pay more attention to things when we trail run!"  Right when I finished the sentence I tripped and almost ate dirt!  Perhaps I should pay attention to where my feet are hitting the ground and not just the mossy rocks.  Something Michele so kindly pointed out!

There were really cool rock formations to go over and lots of character on this trial.  Michele called them "Whoop-dee-dos."  Hmm? 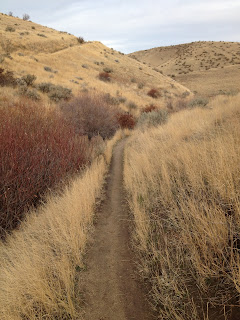 Suddenly over the hill we heard barking and saw 2 dogs running towards us.  DOGS!  That is something I have great disdain for when I am running!  Michele is starting to see things my way finally (now that she got bit n the bum on a trail run!)  We did see the owners with the dogs BUT that sometimes doesn't matter.   When we got near the 2 ladies and the FOUR dogs I had my pepper spray cocked and ready in my hand. One of the dogs was circling me and sniffing my feet.  "He's really nice."  The owner squeaked.  I looked at her, holding up my pepper spray and replied coolly, "Even nice dogs bite."  Then we ran on.  We did take a brief break for a very important phone call that Michele HAD to take.  It was her Granddaughter!  :0) 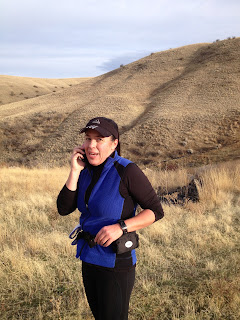 We came out as the trail veered left and found ourselves at the 8th street connection.  "I am NOT running up that back to the car."  Michele declared.  I completely agreed.  So today was going to be an out and back.  Something we don't do very often.  But we were both feeling so great and thought that this trail was soooo easy!  And now comes the humbling.

The way back was tough!  It was uphill the ENTIRE way!  AND then a intense head wind!  Where did that come from?  And where did all of these hills come from? Neither of us could remember having run any down hill.  We were just enjoying the run and feeling like awesome runners!  Now we were being humbled with a tough uphill run.  At one point we approached a hill and Michel yelled, "This hill has 'W' all over it."  It took a second for me to register that she meant 'W' as in 'WALK'. So we did.  We were definitely not trying to prove anything to anyone.  Not even ourselves.

When Michele's watch hit 5 miles, she was done and walked the rest of the way to the car.  I just wanted to be done so badly that I kept running and picked up my pace. Just...To...Finish...As... Soon...As...Possible!

We discussed a few names for this run.  Haha a few were not exactly appropriate.  But we settled on a good one.  One that described how we felt by the end of this run....Humbled.