We Survived the Crater Crawl!!!

What a great idea for a race!!  Michele is so good at discovering these out of the way obscure races.  Either it is a gift or she has too much time on her hands.  Regardless of the reason it turned out to fit perfectly for the theme of this months run......

It was EXACTLY two months ago TODAY that I had an 8 pound tumor the size of a football removed from my abdomen.  Recovery has been progressing better than expected.  So to celebrate my 2 months of being "tumor free" we teamed up to run this race.

TEAM TUMOR!!!!
I had a good friend of mine make us shirts just for this occasion. 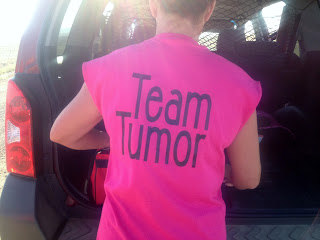 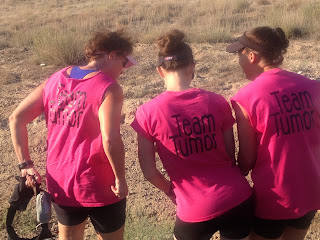 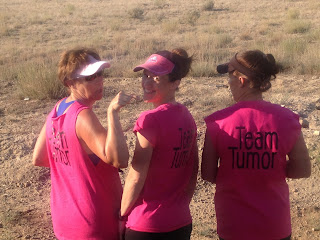 Michele and Kris felt they were going to be TOO HOT! So they "modified" their shirts. 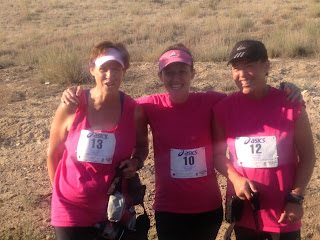 
﻿
Race morning started out like it usually does for me.  I wake up, get ready and then drive 25 minutes to Michele's.  This time, my son Hunter joined us.  He has been training hard all summer to be ready for his senior XC season.  I was excited that he was joining us.  I love sharing my love of running with him.  He even agreed to wear a shirt! 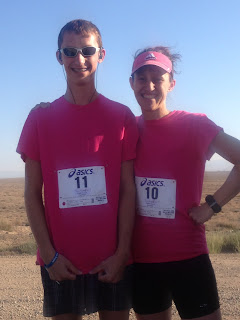 The hour drive from Michele's to the race start began like it usually does, Michele and Kris yelling at each other.  They were fighting over the designs of how they had cut their shirts and whose was better.  Kris ended the discussion with her traditional "Shut your face!" And we hit the road.
﻿

None of us had ever been out to these crater rings.  In fact, we never even knew they existed until now.  Michele had written down DETAILED directions for us to follow.  That can be dangerous seeing that the last time we drove somewhere far with detailed directions....we got lost. 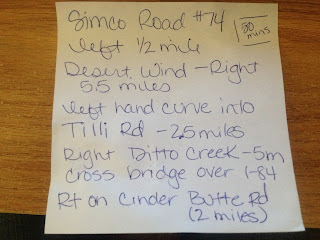 But as we drove we noticed that the race directors had placed very helpful signs along the road.
"We can just follow those."
"No!  We must follow Michele's written directions!!"

Though the way seemed long, we made it there with no problems.

We checked in and got our race numbers.  We were numbers 10, 11, 12, 13!  How cool is that?  The people at check in were really nice too!  They asked about our shirts and even applauded when we explained what they meant.  That was super nice.  Then Michele and Kris decided to get a drink of this pink liquid that they had available.  They didn't even know for sure what it was.  The guy jokingly said he was "Jim Jones" and "Have a drink of my Kool-Aid."  Okay, that guaranteed that I was NOT having any.  Michele had no idea what that joke meant and she took a big drink.  So, did Kris.  They did act a bit funny afterwards, but neither of them died.  (If you aren't sure who Jim Jones is, ask google). 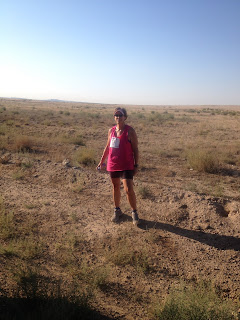 We had some time to kill before the start.  It was warm.  Kris is showing us how "Desert-y" it is.  Then we had Hunter take a few pictures of us.  He purposely took the photo when Kris wasn't ready! 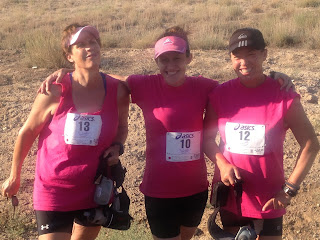 Finally, it was 9:00 AM (late for a race start in these temps).  The gun went off!  Well, actually it was a P.E. whistle, but the same thing really right?
I forgot to check the temperature at race start, but it was pretty warm.  We didn't take off too fast.  This was a recovery run for me and I knew I wasn't racing today.  Since Hunter wore our bright pink team shirt we could see him for quite a while.  He looked good and was in the lead pack.
Our first aid station was at the first crater. 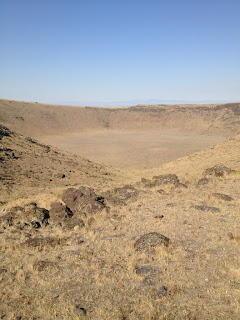 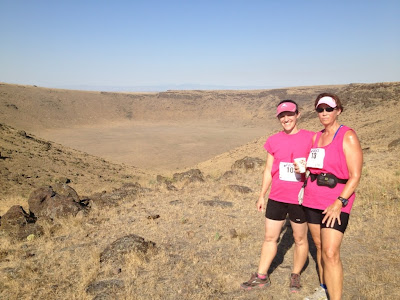 ﻿
We are very sweaty already!  See how Kris' arm is glistening?  It was warm out there in the Idaho desert today!  After this stop, was a pretty good uphill so we enjoyed a walk break.  As we were walking a lady came running down the hill going back towards the start.
"Did we make a wrong turn?"  I asked.  No we couldn't have.  This lady was fast, but she couldn't be done already!  We couldn't figure out WHAT she was doing, and we never did find out.
The second aid station was manned by two young boys.  They looked so happy to see us and started to hold out their water when we were still at least a tenth of a mile away.  I love to see that kind of excitement in serving others!  As I took a water, I stumbled on a rock.  Then Michele did the self same thing.  We stopped to drink and wait for Kris who was just a few steps behind us.
"Don't worry," the boy said, "Everyone trips on that rock."
"Why is that?" Michele asked him.
"Because it is a  magic rock." He said smiling.
Silly boy, he did not realize that it was because he was standing ON THE ROCK!  We all stumbled when we reached for the water!
Slowly the trail became more and more covered with rocks.  Big lava rocks.  This is the danger zone for Humpty Dumpty.  She did not want to take a fall today.  So she started to slow down and be more careful.  Michele and I kept our speed.  Kris said we are rotten friends for leaving her!  But she said it with a smile.  I think it makes her madder when we run ahead, then stop and wait for her to catch up, and take off running again right when she catches up.  So we just kept plugging along at our pace.
The last aid station was wonderful!!  We were very warm at this point.  They had shade and chairs and icy cold water.  They were playing music too.  Ironically the song they were playing was "Some Like it Hot" by Robert Palmer.  So funny!  The man at the aid station was very kind.  He kept asking us if we were okay or if we needed to sit down.  The shade and cold water was just what we needed for the last 1.5 miles.
It's funny how running in the heat can take such a toll on your body.  I was feeling so drained at the end.  But we could see the finish line.  I knew I could make it with out any more stops.  Michele started to slow down a little.  At this part of races, I just am like a horse who "smells the barn".  I have no other focus but to finish and I just push it in.
We all did MUCH better than we thought we would.  It was in the mid-80s at the finish.  Hunter, who we should refer to now as "speedy" got second place overall!  He finished in an amazing 41 minutes!!  That is incredible considering the terrain and heat! 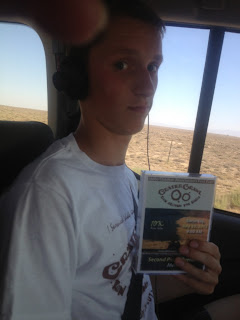 ﻿
Michele, Kris and I did pretty respectable as well!!

I am very proud of all of us!!  And boy did we sure stink afterwards!! I haven't sweat this much in a race since Robie, 2012 (the worst race ever thought up by ANYONE!)
We collected our race shirts, which I am pleased to say are quite nice looking. 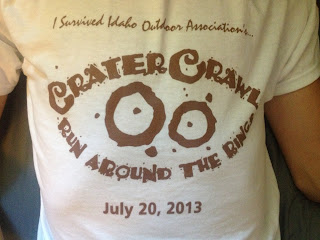 The race volunteers asked what we thought of the race.  While Michele and I raved about how well run it was and how great the aid stations were, Kris added, "Next year can you take a bulldozer and plow off all of the rocks."  That was met with dead silence.  Some people don't know what to think of Kris whether she is serious or not.

We were happy as we loaded in to the car.  What a fun adventure.  Then Kris announced....
"You are NEVER to ask me to run another race in the desert!  Especially if there are lava rocks!"
Michele laughed and said, "Well, you can always say NO!"

I am happy to have climbed a great hill in my recovery (literally).  I have now successfully completed a very challenging 10K.  I remember back to pre-surgery discussions with my doctor.  He had warned me that recovery would take at least 6-8 weeks.  I am so thrilled that I have defied those instructions and exceeding their expectations.  I attribute a lot of it to the shape I was in before I went under the knife.  It has also helped to have such an amazing support system.

I now can honestly say....Running has saved my life!

I had to end with one final picture.  There are many things about this picture that I loved and NONE of them were planned!
1) We are positioned shortest to tallest
2) The photo shows the evolution of our team shirt; from whole, no sleeves, mostly cut apart, to finally completely gone
3)  We look like we could be Hunter's back up singers or support team
4) and most importantly, not only are we all ALIVE....we are still smiling!!! 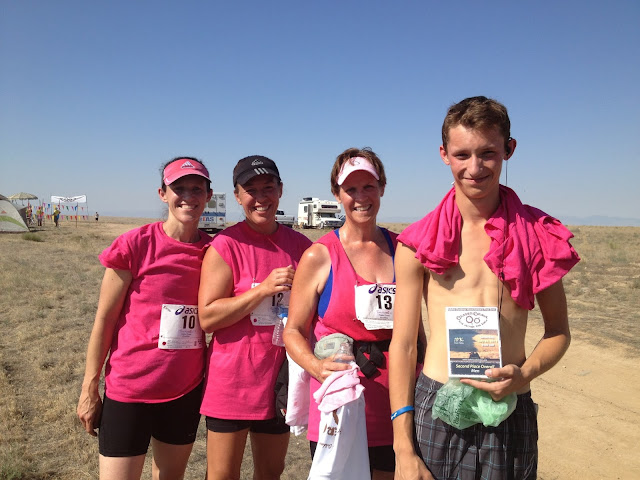