Michele gave me a copy of  a great trail running book.  It has all types of trail routes to try with included maps.  As I read the first paragraph on the first page I laughed right out loud!  It reads:

Warning:  HIKING AND TRAIL RUNNING INVOLVE A NUMBER OF RISKS THAT MAY CAUSE SERIOUS INJURY OR WORSE.  THESE RISKS INCLUDE FALLING ON ROCKS, TURNING AN ANKLE, BREAKING BONES, AND GETTING LOST.

Well, let's see - Falling on Rocks - Kris has taken care of that one SEVERAL times!  Turning an angle - We have all done that many times.  Breaking Bones - Luckily none of us have done that yet  (knock on wood), and then Getting Lost - Only once did Michele and I get lost but we knew we were on the trail system somewhere... A great Blog entry to re-read.

So the reason I laughed so hard when I read this, was because that on today's trail run....we DID get lost!!!  And unlike the first time, we had no idea where the trails were!!!


THE PLAN: Run Buck Tail, Shane's Loop, Pop out onto Rocky Canyon Road (yuck) then down Shaw Mtn Road (double yuck) and finally back into the trail system at Fort Boise.  The plan doesn't always turn out as we think it will.

Mountain Cove trail is a real pretty run.  I have always liked it. Today we even saw a mother deer and her fawn leap across the trail.  Unfortunately we couldn't get the camera out of our packs in time.

And her we go once again, the first mile running on the trails is always so tough!  We parked at the lower parking lot and it was exactly a mile until we reached the really steep hill that leads to the Buck Tail trail head.  Steep hill = walk break!!! 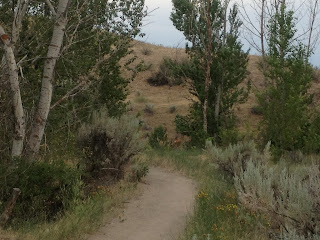 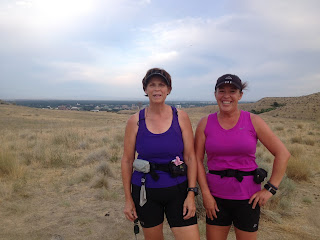 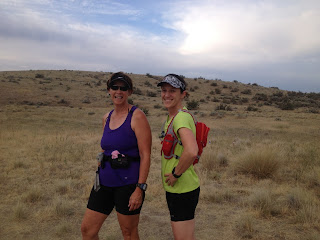 For some reason, Kris wasn't tired at all.  She kept exclaiming how "GREAT" she felt.  What had gotten in to her?  Also notice in the picture my new running pack.  Michele no longer has to be my mule.  I got a sweet Nathan Hydration Pack.  It worked out great!

Up on Shane's loop we stopped for a water and breathing break.  Kris said, "THIS is my favorite spot!"  So she posed for a shot. 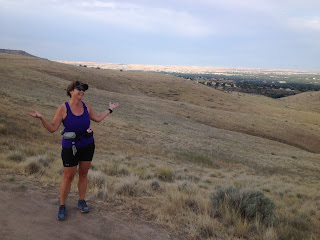 Then Michele had to copy cat her. 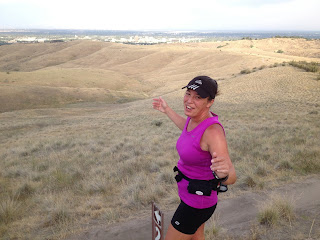 I decided I am going to call this "confession hill".  Michele had a big one to reveal!!

At the Crater Crawl race we received a cute little gift bag in our race packet. 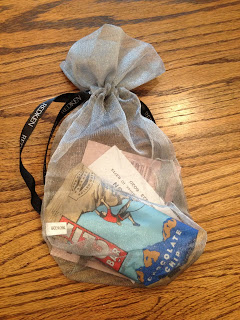 Inside it was some small packets of shampoo and conditioner. 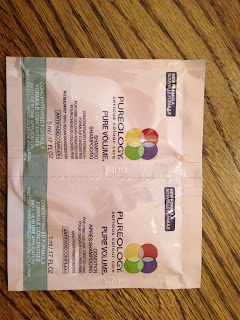 This morning as we stood on "confession hill" Michele asked us if we used ours yet.  Kris had, I hadn't.  Well, Michele confessed that she had used it to.  However, she thought it was sunblock - and she rubbed it all over her arms.  It was then that she realized it was a strange consistency, and re-read the label. Not sunblock Michele - SHAMPOO!

We then spent some time adjusting my pack.  It was hard to get it to the right setting so that it didn't shake a lot.  Michele helped by tightening some of the straps for me.  Finally we got it perfect!  Kris mumbled that I just needed to be fatter and then it would fit just fine.  Michele then told Kris that if she ever quit running she would probably be 400 pounds. Kris responded with the usual, "Shut your face."

After laughing like a bunch of junior high girls (I wonder if other trail users really worry about us), we resumed our run.  Happy day!! It was mostly downhill from here until..... we dropped down onto Rocky Canyon Road.  Time for fuel!! 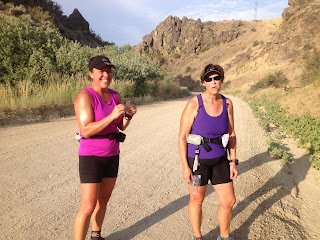 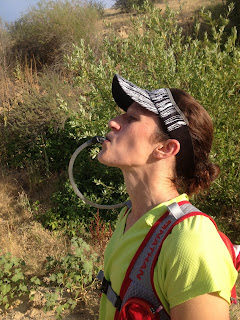 Both Michele and Kris were super jealous of how easily I can re-hydrate on this run.  No hands!!

We felt so much more energized after we fueled up.  We were able to run down Rocky Canyon then up to Shaw Mtn Road without walking or resting at all.  Along the way we spotted a fox!!  This time we were able to get out the camera because he held still and stared at us for quite awhile.  He was quite vain and seemed to WANT his picture taken.  Kris thought he looked like a hyena 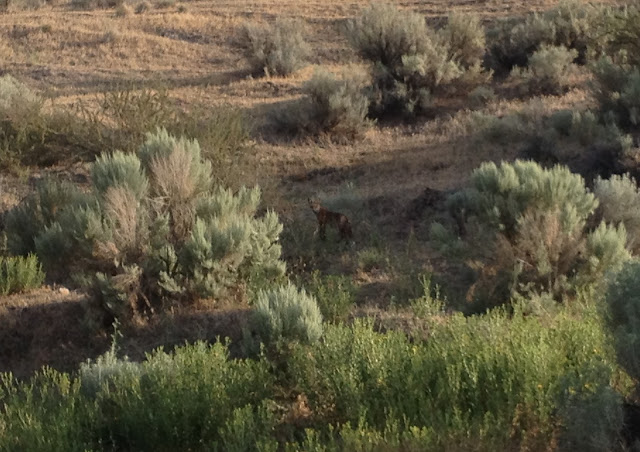 At the top we visited a nice man who was watering his garden.  He was a runner as well.  He proudly declared running 33,000 miles and 25 marathons.  What an amazing feat!  We were dreading running on the pavement down Shaw Mtn Road, he told us of a secret - there is a short cut back tot the trails so we could avoid the road!

But there was a big gate and do not trespass sign.  He assured us not to worry about that and to go ahead.  Avoid the pavement?  You don't need to ask us twice. 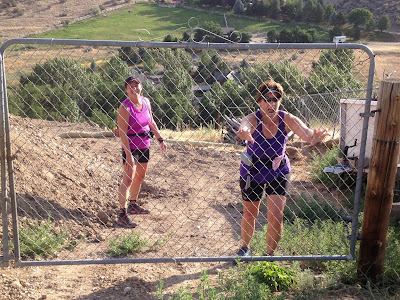 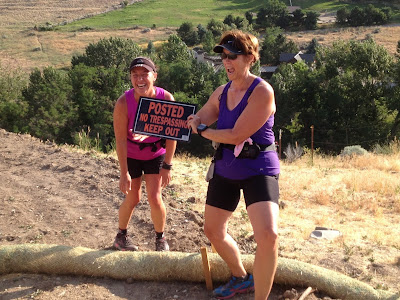 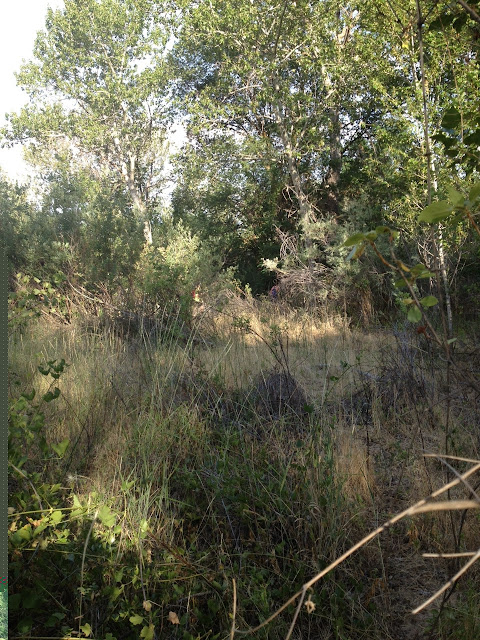 We finally found this and it sort of looked like the remnants of a trail. But it quickly disappeared.  Michele insisted once more, "He said turn right at the creek."  So we went back to that spot to turn right.  Kris kept yelling from the back,  "OK Sacajawea, I'll be Clark.  You lead the way!!" 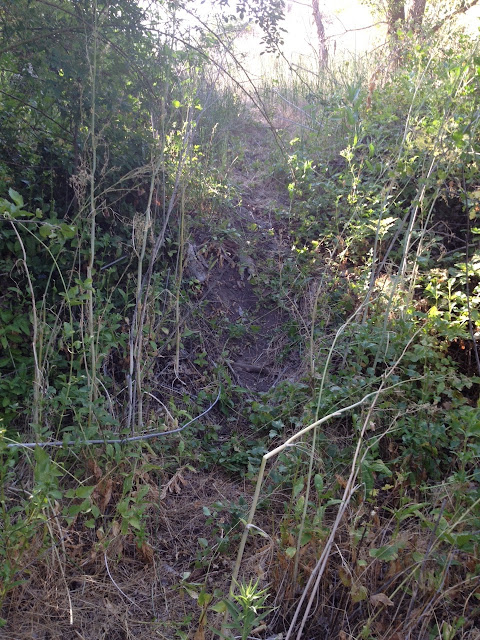 She started to move through the weeds..... Nothing.  Everything that looked like a trail only lasted a few yards!  AAAAggghhhh, how do we get out of here?  Now most normal people would have turned around, went back the way they had came, and written off this short cut as a NO GO. Well, none of us are like most people.  We were determined to figure this out!!  It's equal parts curiosity, stubbornness, and stupidity.

After wandering around through weeds for what seemed like forever  I just wasn't sure where to go.  Kris finally tromped ahead and yelled, "Follow me I will be Sacajawea!" and Michele kept saying "He said turn right at the creek."  None of us decided to just go back the way we came. 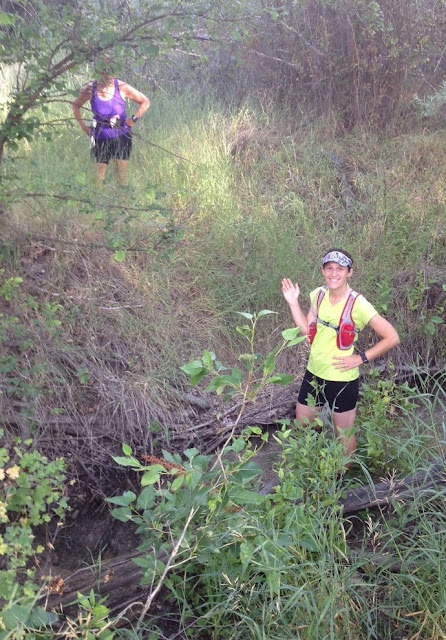 We found a way to cross the creek and come out onto the other side.  It was a lot of tall weeds and NO trails.  We knew the general direction of the main trail we were looking for, so Kris decided we were going cross country on our OWN TRAIL! 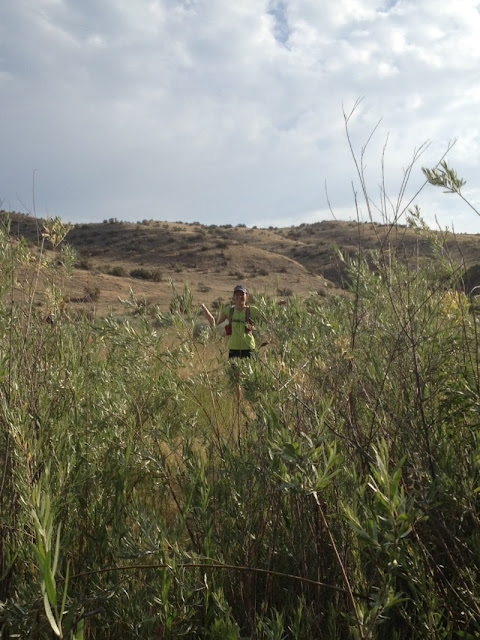 It turned out fine and we found ourselves right where we wanted to be.  It was fun to get lost.  We haven't had that kind of adventure in quite awhile.  It made our run memorable and fun.  We were prepared with plenty of water and fuel so there was no fear of DIE-ING!!  When you are prepared getting lost turns into an adventure instead of terrifying danger with no thoughts of survival (just like the time Michele and I got lost on Femrite).

It was a fun day.  We ended up with 7.7 miles.  The funny thing is that it took us over an hour and a half!  That's because we "adventured" in the weeds for so long.   We talked about how tired and worn out we seemed, even at the first mile.  Kris laughed and said, "I felt great the entire time!"  With a smile she added, "I had an energy drink before leaving my house!"  That got us all laughing again.  Had I known she was buzzed up on Rip Its, I may not have so readily followed her through all of those weeds after all! 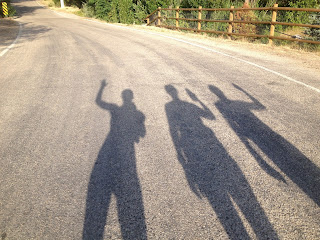