Death of a Yak Trak

So, my Yak Trak's have "unofficially" broken twice in the last month.  It's unofficial because I have managed to rig them back together each time.  Well on today's run, they finally met their demise.

The plan today was 14-15 miles.  We hit our new favorite loop....Seaman's to Veteran's with some Junk Yard.  We planned on adding a little bit in the bike park to get us to the 14 mile range.  Kris (feeling better) will not run that many miles.  It is not a question of whether or not she CAN she just will NOT.  So, she planned to meet us at Veteran's.

We weren't sure if we would need our Yak Trak's or not.  So we strapped than to or packs and headed out.  Within 10 minutes we knew, they needed to go on.  There was just way too many icy areas.  SO we stopped.  Michele said, "Wouldn't that be awful if one of us dropped a Yak Trak down the cliff."  Then I hear a yell of "Oh no!  I dropped my Yak Trak."  Sure enough while she was trying to put it on, the Yak Trak sling shot out of her hand and down the cliff side.  She had to hike down to retrieve it. 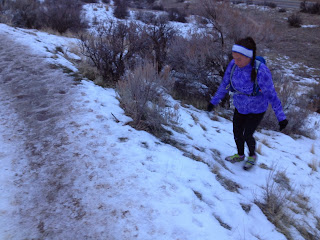 We continued our run uneventfully.  The trail was frozen, then hard dirt, then patchy snow, then torn up hard dirt, then terrible ice.  It was so difficult to get good footing or momentum.  But we plugged along anyway. 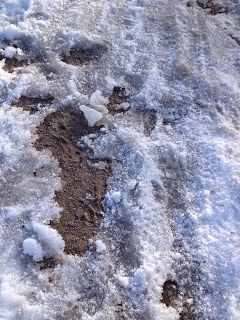 We met up with Kris and headed into Veteran's. 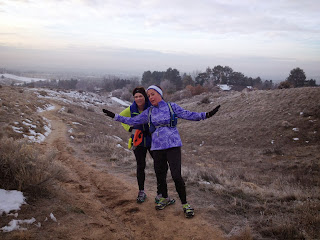 The running was slow today due to the terrible trail conditions, but we still had a good time.  Slowly my Yak Trak's began to uncoil and snap.  By the end of the run..... 13 miles.....they were dead. 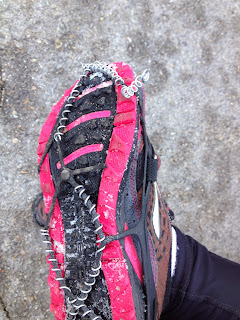 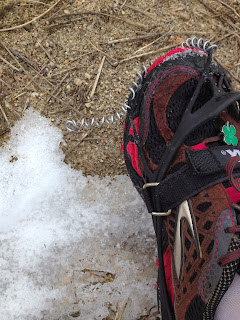