First race of year was a GREAT one!

January 18, 2014.  I roll out of bed at 3:30 AM.  It is a Saturday.  Why am I crazy enough to do this.  Everyone in the house is sound asleep.  I try to be quiet as I eat my peanut butter bagel and gather my bag and trail shoes.  I head out the door knowing they will all sleep in until at least 10 or 11 AM.  I will have already be half-way through with my race by then.

I try to become more alert and awake as I drive to Michele's.  The goal was to go to sleep early last night, 8-ish or so.  Right when I was drifting off to dream land my phone started going off....argh!  Now I'm awake!  Who is texting me?  It's Kris!!  She is wishing me good luck and warning me not to leave Michele on the course.  Last year we left Kris and she fell, resulting in a DNF.  I sigh as I reply a short note.  She responds with a quick "you are supposed to be asleep."  It's 10:30 PM.  "I am."  I type back and put the phone down.  Sleep doesn't return very quickly.

The fog is really thick as I pull into Michele's driveway.  We had changed out meeting time to be earlier so we had more driving time in the dense fog.  When you aren't sure where you are going, it's smart to go slow.  Tired and nervous we head towards Melba for the Wilson Creek Frozen 50K.  We are planning on running the 20.3 mile course.  Race start is 7:30 AM.

The drive is sketchy to say the least.  Visibility is probably 20 feet and it's pitch black out!  Combine that with the fact that we had NO idea where we were going....it was exciting for sure.  We pulled over twice to let other cars pass us who wanted to go the speed limit.  Not sure if any of those drivers made it to their destinations alive or not, but we did.  Slow and steady.  I may not support that when I'm running but definitely when driving.

When we got to the race start area there were parking helpers directing you where to go.  It was 6:45 AM, we were still so tired.  Michele rolled down her window. " Are you volunteering or running?" The guy asked her.  "Vol....Oh! Running!"  Michele was so out of it, she couldn't quite remember why we were there. 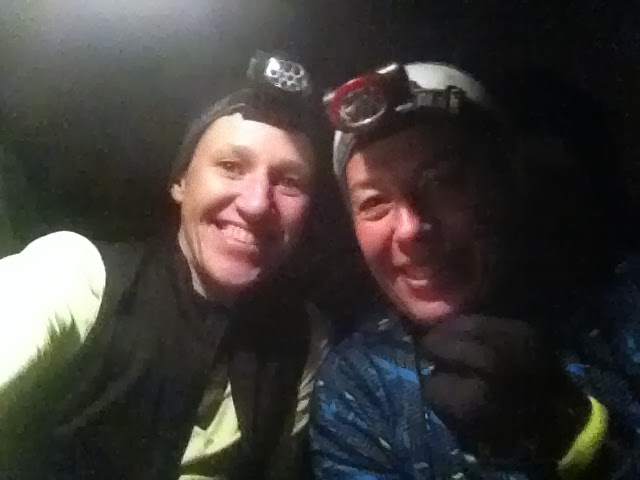 We checked in and got our race numbers, mine was #141 and Michele was #134.  After listening to some advice from other runners we folded the bibs pretty small before we pinned them on our legs. That was it...time to get ready to go!  The conditions were perfect! Last year we had run the 10.8 course and the race start was -5 degrees.  Although we had to deal with the inversion, the trail was packed frozen and the temp was bearable, a great day to run in the Owyhee Mountains.


There were 136 runners who lined up on the starting line.  Of those, 90 were running the 50K and 46 were doing he 20.3 miler.  It was still a little dark so we had our headlands on.  And yes it was foggy.  This terrible inversion has been sitting around for weeks.  I really miss the sunshine! 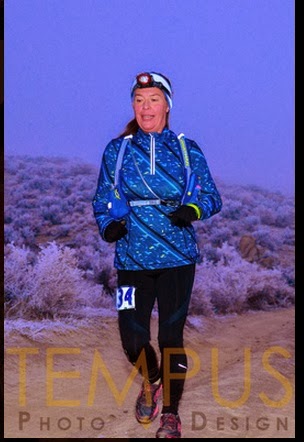 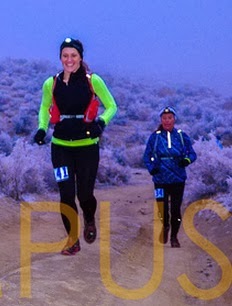 What can I say?  We ran!  We ran and ran.  The first aid station was at mile 2.5.  It came up quick.  Michele's pack was bugging her so we had to stop and make adjustments. Tempus Photo and Design got some great shots of us approaching the aid station. 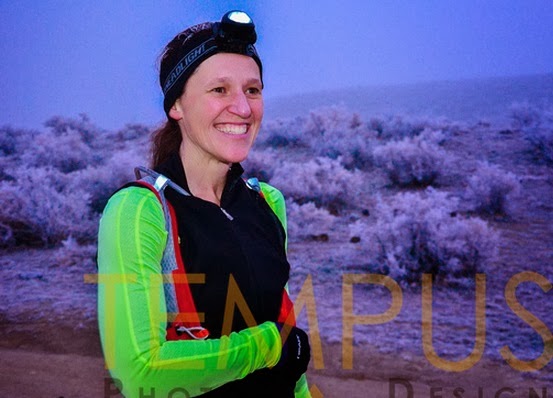 Once we were through the aid station and feeling good suddenly BAM!!  Hills began.  Oh my did they begin!  It was almost like running in to a wall they were so steep!

Six miles of intense climbing.  Some spots were so steep, it was steeper than stairs!  It was so incredibly hard.  But it was worth it because......the views were breathtaking! 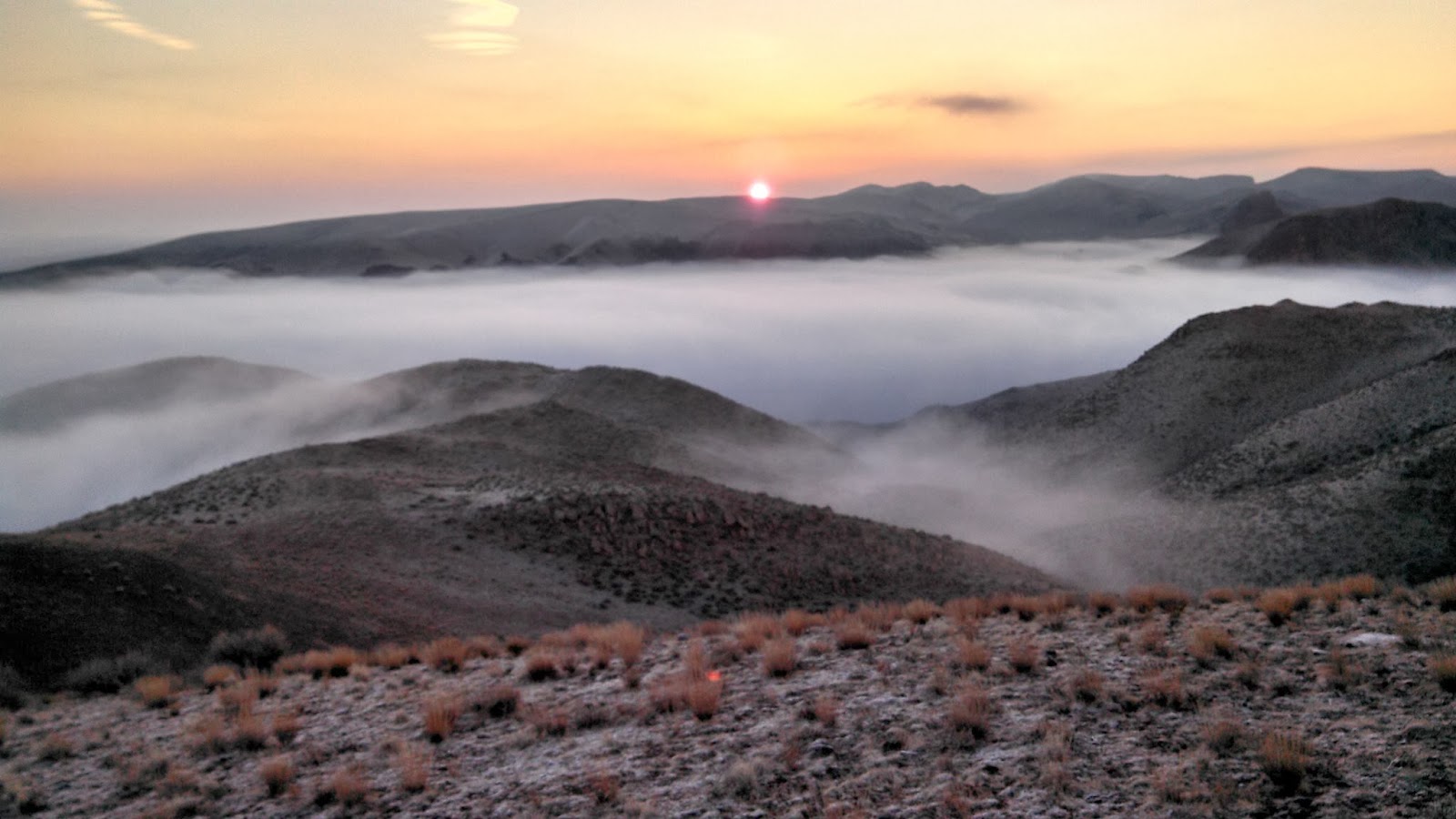 Neither Michele nor I had brought our cameras.  We both regretted it.  Luckily some other runners shared these shots on facebook that I copied.  This is one of the rewards to trail running. You get to see and experience vistas that other people will never get the opportunity to experience.

Finally, we came to the summit, one last major climb to go and it was a doozy!  We trudged up the summit, Michele was getting a little slower as each mile progressed.  She had been fighting a cold and it was beginning to win.  At the top of the summit was a bag.  You had to retrieve an item from the bag to prove you had gone up to the summit and back down.  Inside.......?

That's right! a plastic army man!  I stuck him in my pack and waited for Michele.  On top of the summit held a beautiful view and the SUN!  It was shining and recharging all of my batteries!  It felt so good to just stand there feel it's warmth shining on my face!  I knew eventually I would drop back into the cold, foggy inversion, but for now I was on top of the world!  This is known as Wilson Peak, Elevation 5,358 feet.  When we started we were at 2,816 feet.  The climbing had definite been intense.  Michele grabbed her army man and we headed back down the summit to continue the race.


Our next and last aid station was at mile 13 this is referred to as the 'Mud Pit'.  The great thing about these aid stations is that you know at least 1-2 people at them.  Nellie Pryor was working this one with her family.  With some words of encouragement from Nellie, a swig of cold Coca-Cola and some peanut butter filled pretzels I was ready to kill this race!

I could tell Michele was needing to slow it down.  How could I tell?  She told me!  I think her exact words were, "I need to slow down.  You don't.  Go on ahead."  That's what great about having a GOOD running partner, they recognize when it is time to split.  I was eyeing that goal of finishing in under 5 hours, so I took off.  This part of the course lived up to it's name "Mud Pit".  This was the muddiest part of the race, in fact this was the ONLY muddy part.  I had to stop every so often and scrape mud off my shoes when they were getting too heavy.  Michele later told me she could see where I had been at each mud scraped rock.

The course was some rolling hills for another couple miles.  The terrain was still so cool to look at.  At he top of every hill I would turn to find Michele and wave.  Slowly she disappeared.  That was it, now I was on my own.  My only concern?  I do not have the best skills in tracking.  In other words, I tend to get lost easily.  I prayed that it would not happen today.  I carefully kept my eye out for the yellow flags which marked the trail to follow.

Then it happened, I had to re-enter the inversion.... 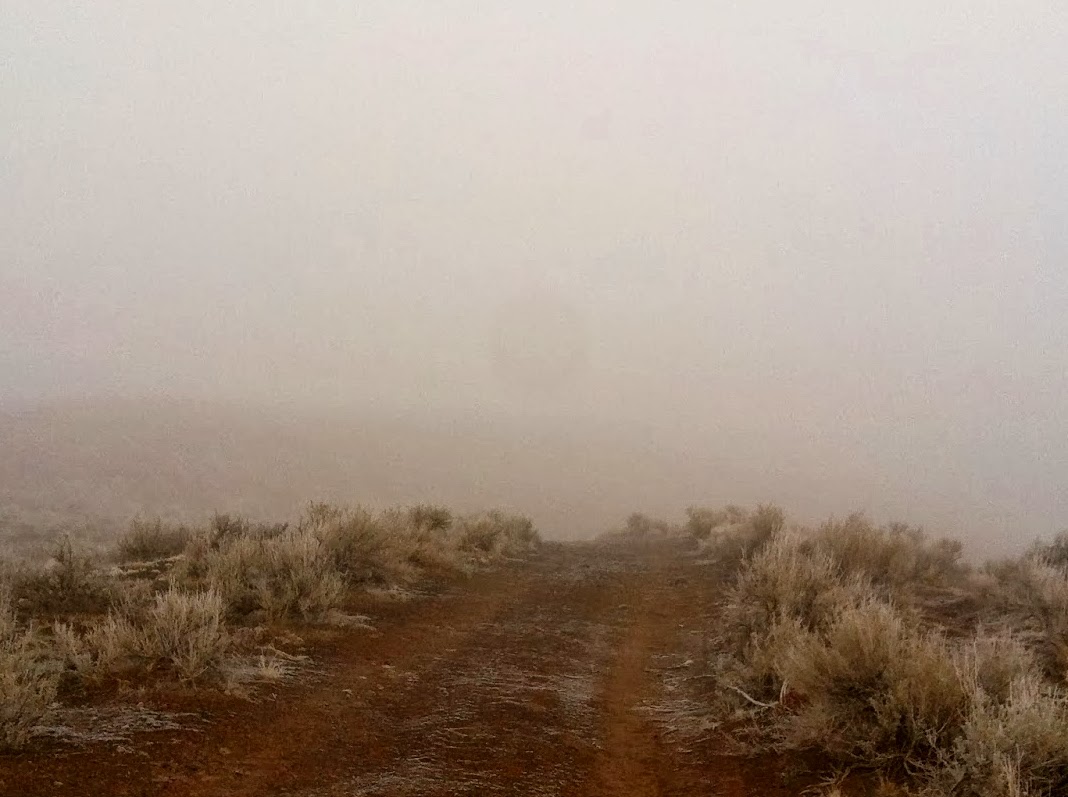 Ugh, I knew it would happen eventually.  The only cool part of the inversion is the frosty layer it places over all of the vegetation.  It is like running in a mini-winter wonderland.  Every once in awhile I would pass another runner.  This was so exciting, not because I was passing people, but because it gave me the reassurance that I WAS in fact going the right way!  The conditions were perfect and I was really enjoying this race.  Every mile I would re-calculate my progress on making the under 5 hour goal.  It was looking like I just might do it! Dropping down the next hill I suddenly took a turn and found myself on a frozen creek.  No yellow flags around anywhere.

Had I studied the course map?  Well, not actually 'studied'.  I had looked at it a few times.  Was this the right way?  I carefully made my way along the creek wondering if I was lost.  In a few spots I did see mud and dirt, that meant runners MUST have come through here right?  Despite seeing no more yellow flags I continued.  I swore I could hear runners above me, this must be right.  Every fiber of my being said to turn around and go back, but I continued along the frozen creek instead.

To my joy, up ahead I saw yellow!  I was going the right way after all.  I climbed out of the creek bed and continued on my way, happily passing fellow runners as I ran.  There was some more climbing but for the most part I was feeling great.  I really kicked up my pace, the time goal was still within reach.  The next thing I knew I was at 20 miles on my watch.  0.3 miles to go!  I was going to do it!!

I passed 20.3 miles with no sign of the finish line.  Then 20.4.  Then 20.5.  Oh no!  Where was I?  I slowed down to figure out what had happened.  Then a runner came by me, Joelle Vaught, the most amazing female Ultra runner around.  I asked her if I was going the right way?  I knew she was running the 50K.  "Yes!" she smiled and added, "about a half mile to go."  A half mile?  I wondered as I again picked up my pace to match hers, where had I gone wrong out here on the course?

Michele?  Well at the frozen creek she doubted the course and turned back to double check, adding an extra ten minutes to her time.  But she was glad she did.  She came across the finish line with the same question I had....21 miles? 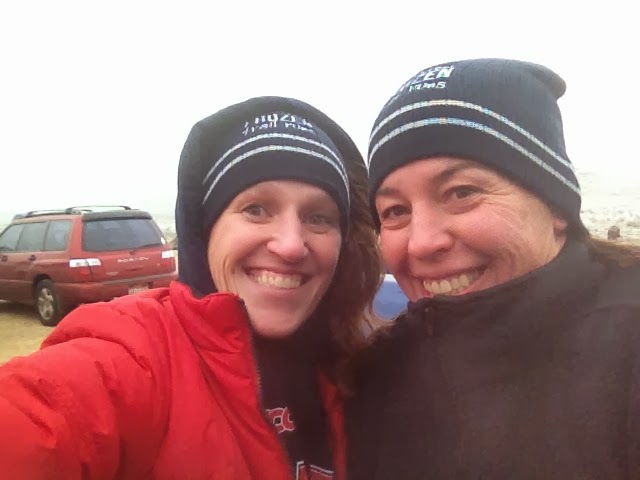 We did it and we both felt great!  Not exactly an ultra yet, but a step in the right direction!  We have both run marathons, but this was different.  This was extreme mountain trail racing.  So much harder and more enjoyable than any marathon!  I have a feeling this is going to be a great running year!!
Posted by Jodi at 8:12 AM