Haven't blogged our trail runs for the past couple weeks because they have been ...well.. boring honestly.  Since we are training for Race to Robie Creek, that is where our trail runs have been.  Not really much to blog about.  For instance I could have written about last weeks run being the run of silence.  We hardly said a word to each other because it was a hard run day.  But that was it.

So today, the run became a bit more interesting.  Yes, it was still another Robie Training day, but it got spiced up a notch.  Why?  Two simple words..... BOSSY BANDIT.  That's right folks, she has emerged from her secret training.

We planned the run out earlier this week (what time to leave etc.)  But then the "weatherman" started to mix things up.  I really think we should start to refer to them as weather guessers from now on.  Anyway, he had Michele so worked up about today's weather. High winds, 100% chance of rain ALL DAY!  She sent me a text last night worried about the rain.  I said "Let's chance it."  She said, "Let's decide in the morning."  Then she said that Kris (the Bossy Bandit) was not going to go because of the rain...WIMP.  I replied "She is getting soft, What a shame."

I woke up and there was NO rain, and in fact not too many clouds.  So I dressed in the dark and tiptoed out of the house (it is spring break and I wanted to let the kids all sleep in).  When I pulled up to Michele's there was Kris in the driveway, she toughened up after all!!

Immediately spice was added to our morning.  If you have never driven with or ran with the bossy bandit you are truly lacking adventure in your life!  We began before even getting into the car with the curse words!  Probably because we were making fun of her two hats she was wearing.  The entire drive was just as spicy as we then learned that she had chugged a 5 hour energy drink moments before, oh boy.

Kris told us for 20 minutes how much wiser she is than the both of us.  She informed us that she would run today at her own pace and we could not make her do anything else otherwise.  "You run on ahead without me."  Much to my dismay I had forgotten my watch which is total torture for me!  Michele laughed and said she was glad because I would run a bit slower with out it, which in turn meant she could then run slower.

When we parked at the dirt and started to get ready to run, Kris jumped out of the car and took off!  I don't even think I had my hydration belt buckled yet.  She was waving her arms like a mad woman and running away from us laughing like an evil cartoon villain.  We laughed as we finally started our run.  We caught up to her and I thought it would be funny to sprint past her.  As I did I yelled and taunted her.  She just growled, "Shut your face!"  But she said it with love.

As Michele and I ran we slowly pulled away from her, which was fine.  But then passed this creepy old white truck. As we passed it a man sat up and looked at us through the window.  CREEPY CRAWLERS!!   We wisely decided it would be "wise " for us to wait for her so that he wouldn't jump out of the truck and grab her.  It is a good thing we did because she had COMPLETELY zoned out and didn't even see the truck.  So, today we saved the Bossy Bandit's life!  You're Welcome!!! 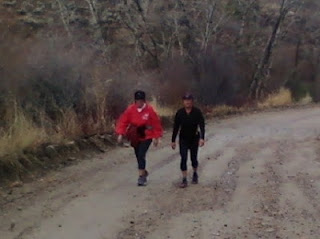 We went all the way to the summit, Kris talking about how she wished Michele had not told me exactly what a "Jell-O shot" was.  I thought it was just a drink of liquidy Jell-O.  Michele laughed and told me what it REALLY was.  Kris was mad.  She wanted me to discover for myself.  Ten she said she could beat me down the hill.  Gotta love how she looks out for my well-being!

As we got to the summit, everyone became a walker.  The conversation turned to Winnie the Pooh of all things.  Michele was trying to match our running personality as a character.  In the end, Kris turned out being Owl, Eeyore and Rabbit.  Haha.

All in all, a good run and a perfect day!  The "weather guessers" were wrong again!  We had blue skies and sunshine.  The rain did come, when we were in the car and the drive back.  It was our DESTINY to run  today!  The Samurai Weather Gods made sure of it! 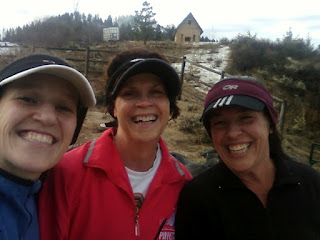 The Run of PAIN!

So it happens to all of us, some more often than others.  You are ready to run, excited to run, pumped up for the run and with in the first few strides it hits you....PAIN!

Now I'm not talking about minor throbs or simple aches or even an occasional twinge.  I am talking about full on, I don't think I can run anymore, PAIN!

Michele's bad luck started out before she even left her house.  She thought since I was running late she would do some stretching and....tweeked her knee somehow.  So she was doomed before we got out of the car.  Today was to be a Robie training run.  We started at the bottom of Shaw Mtn Road.  Immediately I felt excruciating pain in my Achilles.  I tired to grit through it but after a mile and a half I knew I could go no further.  I had already stopped twice to try and stretch them out with no luck.  So we stopped.  I reached into my hydration pack and TADA!!  A Biofreeze wipe single!  The relief wasn't immediate, but it did come!

Michele snatched it from me and rubbed it all over her knee before we continued.  Boy we were quite the pair today.  We ran up to the Orchard Gulch Trail Head and turned around and headed back to the car.  The run down was easier, it is always easier.  The trail was in great condition too and it wasn't too windy.  A fierce headwind did pick up though on our last 2 miles down.

We realized that we have become long run snobs.  What exactly is a long run snob?  Here are some of the definitions:

1)  You only run in races that are half-marathon or longer.  Anything else is just not worth the time or money.
2)  You cheat on the back off days in your training when you are only supposed to run 3 or 4 miles.  "I'm not lacing up for a run that short!"
3)  You don't feel warmed up and good until mile 4.  Those first miles are just the warm up and don't really count.
4) When someone asks what you ran that day you feel guilty and apologetic if it is anything under 10 saying "Oh, I only ran 9 today."
5) Thinks "sprinter" is a bad word.
6) A half marathon is a "training" run.
7) You're daily runs are now too long for the dog!

So we laughed at the new place we have come to in our running life, as long run snobs and we decided, we are happy to be there.  Most the aches and pains have subsided and we cruise on down the last mile to the car.  Today we definitely EARNED the sprite!  There were no complaints on that one.  We stretch and hope that we can be pain free on our 18 miler in two days, dreaming of ice and rest for the rest of the day (which neither of us gets to do).

So as I write this I wonder.  Why do we run even when it feels like our legs are on fire or joints may fall off?  Why do we continue when the pain is impossible to ignore?  Why do we run in the snow, wind, rain, when passersby give us strange looks?  It is because we CAN so we DO.  If we didn't we would go insane, and thus explains the INSANITY.  We do insane things...to stay SANE.

And now I realize, that was my last Biofreeze wipe.  I just toggled over to a different window and ordered 24 more.  Better safe than sorry.
Posted by Jodi at 5:54 PM 1 comment: