Have you ever been doing laundry and you find a $20 bill in a pant pocket!  It is so exciting!  Hidden Treasure!  Today we ran on a hidden treasure that KRIS FOUND!!  It was wonderful!

Today's trail run changed routes about 5 times before we actually got out of the car.  We went from planning to run a 10  route that is rated as insane, strenuous, and mondo to a nice 5 mile easy run through Camel's back.  We had to have a late start and I had run a 12 miler yesterday.  See we both have an important skill needed in running trails, flexibility.

We parked at the upper camel's back parking lot and headed up #37 Owl's Roost onto #38 the Grove and past the Foothills learning center.  After climbing up Kestral to Crestline we headed left onto Red Cliffs Trail.  We had done this loop on our night time run and it was fun to do it again in the daylight!!

As we ran we decided which trails we were NOT going to run this year.  Some are not really trails, they are more like adventures.  We agreed on every decision!  Anything to avoid the mondo difficult ones!

Red cliffs trail is really cool looking at one point.  It has a unique look to it. 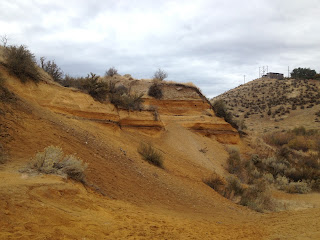 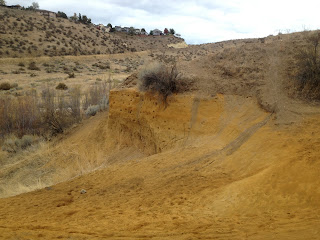 After Red Cliffs we headed across the road and onto Chickadee.  I had never ran it from this direction before.  We saw a lady with two silver gray dogs.  Michele thought they were Silver Labs, but the lady told her they were Great Danes, 3 months old.  As we ran by Michele told me that they "make" Silver Labs now.  I laughed.  "They MAKE them?"  I then told her that they don't make them, they BREED them!  Silly Michele.

Now is where the hidden treasure lies.  To your left as you crest chickadee is a trail called Red-winged Blackbird.  It was WONDERFUL! It had bridges, and arching tree cover, and nice leaf covered paths.  I loved it so much that I did my impression of Kris ad ran with my arms flailing yelling, "I LOVE THIS TRAIL!"  I wish it was a 5 mile long path, but alas it is short!  Definitely a do again!
BUT, despite the beauty of this Hidden Treasure I did have 2 hard lessons learned.

#1)  Do NOT eat a protein bar 30 minutes before a run.  Ugh, my stomach was not happy with me at all!
#2) When your sister/running buddy says to you, "Hey these New Trail Shoes gave me a blister.  Do you want them?" Do NOT take them.  Because when YOU run in them they will then give YOU a blister too!

And so now I have a horrible stomach ache and a blister.
Posted by Jodi at 6:13 PM No comments:

So today we decided to tackled HARD GUY #33 .  We had heard a lot of terrible things about this trail and even it's name sounds daunting.  Kris's husband Dan, an avid biker, mentioned that he had NEVER seen a runner on hard guy!  Well, he has never seen Michele and I then.  We are obviously not your typical runners!

We parked at the first Corral's trail head off Bogus Basin Road.  This is a portion we have run before.  We cruised along until we came to the trail head for #33.  Here we go! 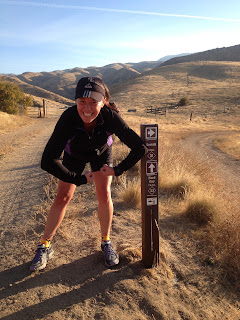 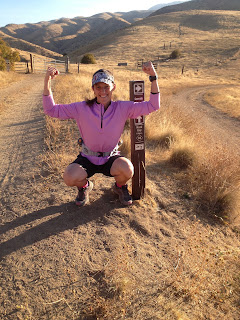 This trail wasn't the HARDEST we have ever run nor the steepest.  It did have a lot of climbing and we did do a lot of walking.  The toughest part of the trail was the uneven surface.  It did make it hard to get a good footing ad some parts were very sandy! 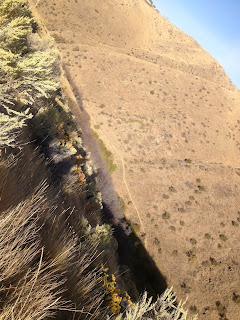 As we ran we passed a trail on our right that was unmarked.  Michele said she thought that it was the "Dry Creek" trail that we had heard about.  It is not part of the Ridge to Rivers Trail system so is not on our map.  As we continued to run we could see the trail below us windy around.

It may be hard to see in these pictures but it is down there!  I almost tripped a few times because I was looking down into the ravine instead of where I was going.  "I want to run down there!" I said.  Michele agreed.  We started hatching a plan right then and there.


Since Hard Guy kept CLIMBING and CLIMBING we decided we had the general idea of what this trail was like....a climb.  Although as a side note, Five Mile Gulch makes Hard Guy look lie a beginner trail!  We decided we would turn around ad head back to that trail we saw!  We ended up running about 2/3 of Hard Guy, enough to say we had done it, and don't need to do it again! 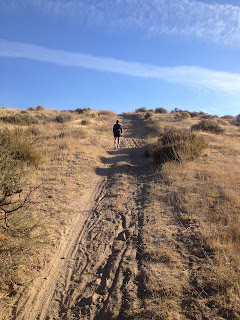 SO, we happily turned around at mile 4.6 ish and headed back to that unmarked trail.  Unfortunately, running Hard Guy down hill wasn't as pleasurable as running down hill usually is.  It was a bit too jarring because of the steepness and uneven terrain.  At just over 6 miles we reached the unmarked trail.  Down we go!

This was the greatest trail EVER!  Every once in a while we find a trail that we love so much we want to run it again!  This is one of those trails!  Fabulous surface, easy up and down hills, interesting ,single track, beautiful scenery.  Can't wait to see what this one looks like in the spring!  We eve got to cross a creek! 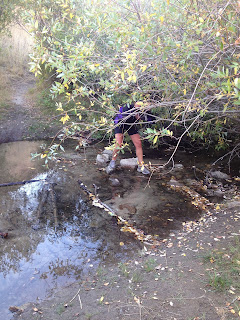 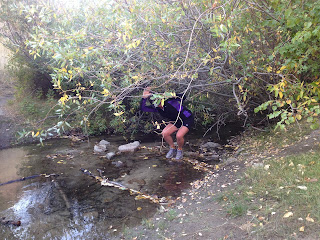 Well, I crossed the creek fine. Michele had a little trouble.

﻿
This "Dry Creek" Trail ended at Bogus Basin Road.  Michele had read about it in one of her mountain biking books.  "It should be just a short run up the road to where we parked."  Well, that was not exactly true.  Here we were running on a part of the road that we had never ran before, having no idea how long we had to run to get to Michele's car and at this point we had no idea where the car even was!

It turned out to be about 2 miles.

SO we tackled Hard Guy and in the process found a new favorite trail.  That gives us the self-proclaimed titled of TOUGH GIRL!

And what of Dan the biking "expert"?  Well, when he found out about our adventures he set out that day to try out Dry Creek and loved it!  We are such a good influence on him!
Posted by Jodi at 2:25 PM No comments: