Robie is over. Marathon is over.No  Now time for some enjoyable days on the trails!  The Pulse Running and Fitness Shop has the coolest monthly contest this summer.  It's called the FKT (Fastest known time or FUNNEST known time).  Today we ran the May FKT course for a Funnest time.  My son and one of his friends came with us.  If they knew where to go they would have definitely had the fastest time.  But instead they joined in our fun!

The loop is GREAT!  Drive up Rocky Canyon Road and park at the 5-mile Trail Head. 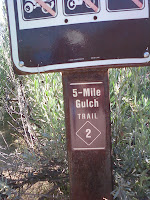 This trail was inclined but so beautiful!  We crossed like 4 or five creeks and everything was so green!  I almost fell off the trail because I was admiring the scenery so much!  After a little over the first mile the trail forks..ignore this!!  Stay to the left and go onto Watchman (trail #3).  I forgot to take a picture of the marker.  Now you get to climb some switchbacks!  The vistas are breathtaking up here!  There are also sunflowers blooming like crazy!


As you drop down from Watchman, the trail briefly connects with Femrite's (#6).. This used to be called Curlew Connector.  It's a multi-use trail.  We had a guy on a motorcycle stop and wait for use.  Weird to see that on a trail.  Here is where Speedy Hunter was sitting on a fence waiting for us.  He was a ll casual and looking rested.  Ah what it must be like to be 16 and faster than the wind with no body fat!

It the fence where Hunter was sitting you fork left again.  This gets you on to Three Bears (#26).  Now this portion of Three Bears was quite pleasant, probably because we were going the opposite way aka DOWNHILL! 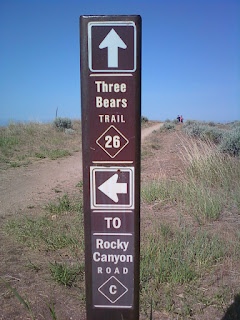 As we headed down Three Bears I could see Hunter and Josh quite a bit in front of us.  They stopped at the trail sign, read it, then went straight.  I had told them to turn left.  I started yelling for them to STOP! TURN AROUND! WRONG WAY! etc.  I turned along the ridge and lost sight of them briefly.  Suddenly there were two women coming up the trail giving me a very strange look.  "Sorry, my son is going the wrong way."  I said with a smile.  The woman laughed and said, "Well he went that way and he is FAST!"  When I curved back around and could see them again they weren't turning back.  I started yelling Hunter's name louder. But then the trail dipped down and I couldn't see them again.  I got to the trail fork and looked up at Michele who was a bit behind me.  "Are they turning around?"  I yelled.  Michele's reply?  "Yes, that's where we turn."   So, I yelled again, " Are the turning around and coming back?"  She laughed, "Oh...yep."

Hunter and his buddy Josh did an extra quarter mile or so.  Michele and I got a nice water break while waiting for them.  If they hadn't heard me and turned back....what a mess that would have been!  But luckily they did!

From here we head LEFT to the Rocky Canyon Road again.  It is very steep here with loose rocks.  When Hunter said he felt like he was running like Forrest Gump as he descended.  Michele announced she needed new trail shoes.  I skipped funny down it. Josh said nothing.  We hope he wants to run with us again!

The run turned out to be a nice easy 6 miles.  This is DEFINITELY a trail we would do again.  The Bossy Bandit was upset when she heard how wonderful it was...well...she should have gotten out of bed this morning then.
Posted by Jodi at 3:33 PM No comments:

Well, I have now officially joined the club! 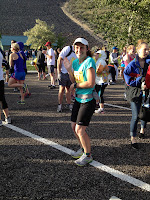 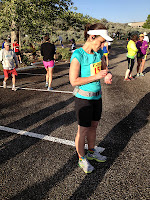 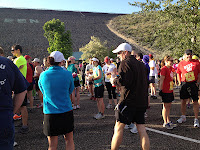 I ran my first marathon on May 19, 2012 in Boise, Idaho; the Famous Idaho Potato Marathon.  Originally Michele was going to run it with me, but wimpiness and then illness caused her to register for the half instead.  Michele and Kris were with me at the start to cheer me on.  Their race started a half hour after mine. 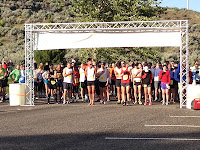 I probably ran the first half faster than I should have.  I hit 13.1 miles in 2 hours and 2 minutes.  But it's hard to slow yourself down in a race, especially me!  At mile 21 I was really feeling the urge to stop.  I had to really push myself mentally.  My goal was to finish under 4 hours and 20 minutes.

It was great to have Michele and Kris there cheering me on at the end!  They helped me over to a nice shady spot where I immediately lay down.  Kris had a pillow for my head and they got me oranges and my race shirt.  I had my own pit crew to spoil me!  They are the BEST!!

I am happy to be in this club of 26.2!  I felt really good the next day.  This was better than Robie ANYDAY!!  Can't wait to do this again!

Time to vote, are we crazy?

All right!  Who is reading this Blog?  We would like your opinion on a matter that has been going back and forth between the two of us for weeks!  As you know we have the Great Potato Marathon (half for wimpy Michele) coming up in two weeks.  Then we have the Mesa Falls Marathon in August.  Here is the dilemma:

There is a trail race in October called the Foothills 50K Frenzy. (http://foothills50kfrenzy.com/)  For those of you who are not used to measuring distances in "K's" that is 31 miles.  Now we absolutely LOVE LOVE LOVE running trails and it is MUCH more forgiving on your body.  So, we are debating should we go for it?
Help us out, give us your opinion!! Comment on our blog page so we can hear what you think!
Posted by Jodi at 7:38 PM 1 comment:

Now that Robie is OVER! we can stop training on that cursed road!  It was so great to get off the roads and hit the trails again.  It has been WAY too long!

Since there was so much rain yesterday we were forced to do the Gulch and Camel's Back.  We knew it was least likely to be muddy and of course, we were right.  (Actually it was Michele who said this but I will claim the wisdom as well)  It was such a fantastic run!  Our route was one we have done before...

Red Fox to Chickadee (I cannot stand the gravel portion of Red Fox) then on to Lower Hulls Gulch.  The creek was so full and everything was super green it was so beautiful to run through today! 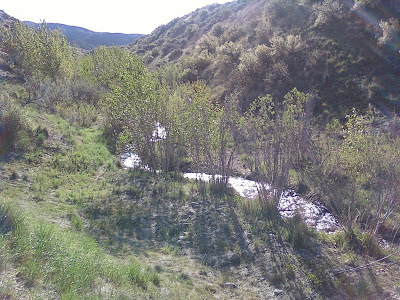 When we got to the bridge that you cross to get onto Crestline, Michele dipped her jacket sleeves into the water to mop off her face.  She had been complaining about sweating so much.  (we were a tad over dressed)  "It's running down my back!" was one familiar holler that I heard from behind me.  We were quite warm but it was not even close to dragging yourself uphill through a furnace like a race we all know about! 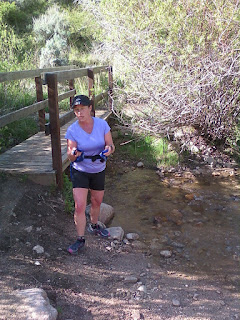 We hit Crestline and had a wonderful downhill descent onto Kestrel, then Owl's Roost and finally the Grove.  There is just something about Trail Running that makes everything great in the world!  Ah!

However, there were quite a few ornery people on the trails today.  Usually runners are so friendly.  They pass with a wave, a "Good Morning" or at least a smile.  For what ever reason we got snubbed by several runners when we waved or said Good Morning.  Perhaps Michele was pulling mean faces behind me as I greeted Passer-bys, maybe I really stunk from sweating so much today, or I guess there were just grumpy people running today.  Whatever the reason, those downers did not taint our run!  We loved every single minute of it!

On the drive home I even got to rip off my shoe to show Michele my new running trophy.  The purple rotten toenail that will be coming off any day now.  Oh yes, we are officially Trail runners when that happens.