Today was a theme run!!  We decided to try out the trails behind Hillside Jr High.  It is referred to as Hillside to the Hollow.  View map here.

The trails are not marked and the map is hard to read so, needless to say this was an exploration day.

We ended doing 5.5 miles.  It was a good run, no one fell, no one was injured and we saw no wildlife.

The fall colors were gorgeous.  Unfortunately our cell phone cameras do not quite capture their radiance.

Email ThisBlogThis!Share to TwitterShare to FacebookShare to Pinterest
Labels: Hillside to the Hollow

We are not lost.....we are EXPLORING!

What a day to try out a new trail system.  Michele's "biker connections" tuned her in to a new place to run.  He told her we would "LOVE IT".  Kris' husband has been there biking and when he got wind of what we were planning, he said we would "HATE IT BECAUSE IS TOO HARD."  Bu he does always underestimate our running awesomeness.

Our plan was to meet at Albertson's at 7:33 on Saturday morning.  I like to make our meeting times unusual just to mix things up.  I arrived at 7:20.  Why was I so early when I am usually the one who is late?  Well, I had to a certain animal to take care of......

Anyway. We headed up Horseshoe Bend rd to the trail head in Avimor.  We were trying to read Michele's trail book as we drove to determine where in the world we were supposed to park.  As it turned out we parked in the WRONG place.

The trail head we started at was 9A.  I had my running buddies pose for a morning start photo.

His photo truly captures what it is like to run with Kris.  No other words are needed! 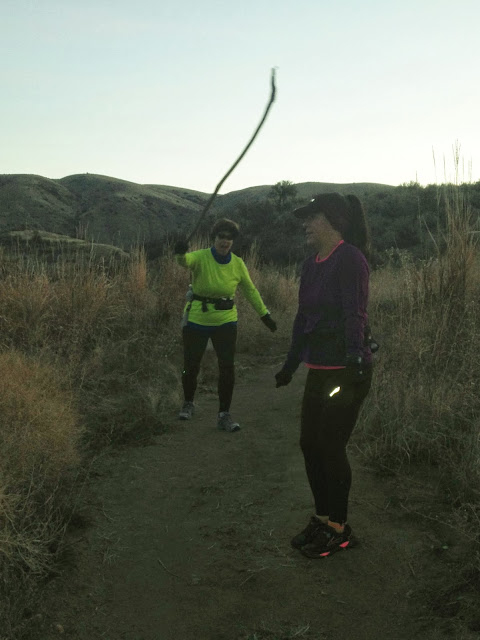 As we got stared Kris kept calling me "Meredith".  There is this article by Marc Parent in Runner's World where he volunteers at a water station during a race.  He says, "Meredith is that person in your life who is so casually perfect in every way you reflexively agree to do anything she asks in hope that it might bring you a little closer to the same perfection."  So, I guess it was supposed to be a compliment.  But by the way she kept saying it, she did not mean it to be.

This trail we had NEVER run before.  We had never even heard of it before.  Michele sounded so sure of herself and the directions that she had read.  We took off!  I spent at least 10 minutes harassing them for how warm they were dressed.  I had on shorts and one long sleeves on.  They were layered up like crazy.  Please note, I was perfect temperature during the run, other "runners" who will not name,  were too warm.


We were not even a mile in when Kris began to announce we were lost.  "You do NOT know where you are going!"  This was because the trail numbers were not quite matching up with Michele's directions. I kept saying, "Let's just run another half mile and see where it takes us."  Well it took us up a HUGE hill that was almost impossible to climb.  Michele and Kris stayed at the bottom while I climbed to see if I could get some trail sightings.

I couldn't quite tell so I made them climb up and join me. HAHA 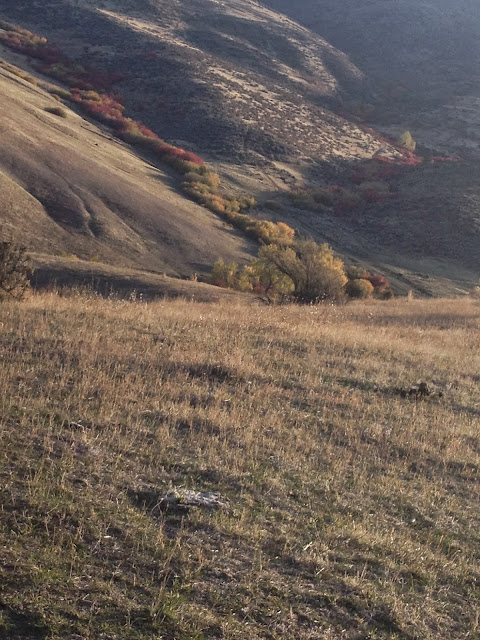 We could see this trail down below and we REALLY wanted to find it.  We kept going until finally we decided to back track and try another fork.

A mile in Kris yelled again, "You do NOT know where you two are going!"  We didn't but we were not about to admit it.  We just saying, "Let's just run another half mile and see where we are." 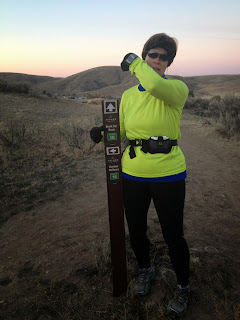 A first for us on this run was to run with free ranging cows.  Now, I am not afraid of cows, but when I am running almost ANY animal is the enemy.  I talked nice and loud to the cows as we ran through, just so they knew who was boss.

Then .... TADA!  We found the rail that was in Michele's description! 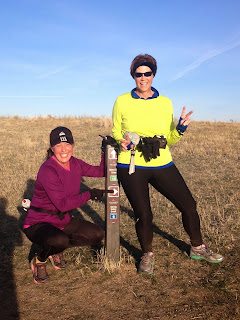 This is our Victory pose for becoming UN-Lost!!  Now Kris's nickname is "doubting Thomas." 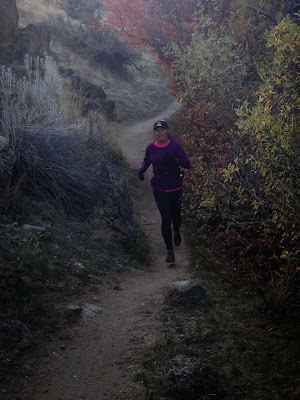 This trail was unbelievable, incredible, beautiful, wonderful, picturesque, captivating, did I saw wonderful?  We loved it.  The fall colors were amazing!


We were running along enjoying this breathtaking run when suddenly we hear Kris yell from behind.  We both stop, turn and find her climbing back up to the trail.  She looked down at her watch and just ran off the trail and down a small ravine.  That woman!?!?!  How does she survive on the trails without us? 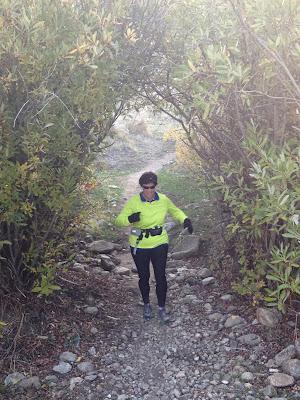 AS we finished this glorious run, we came out to the end of the trail and had no clear idea where we were.  I started to head towards the street figuring it would eventually lead to the car.  Kris had other ideas.  She was SURE it was up the next ridge.  So she started plowing up the hill, Michele close behind her.  As I turned to follow them I looked back and guess what I saw....... THE CAR!!!  "There's the Car."  I yelled and turned BACK around.  I guess Miss I don't run more than 7 miles on the trails was actually up for another loop today.

Today we decided to be adventurous and try a new loop.  We were so excited.  When we are about to try a new trail run we get as excited as little kids on Christmas Eve!  So the plan was this:

I only detail this so much because you have GOT to try this loop.  We LOVED IT!!  7.5 ish miles.

We did walk a bunch of Scot's because it is insanely steep.  But it was worth it once we hit downhill on Interpretive.  I am going to refer to Interpretive Trail as #0 because it is taking too much concentration to keep spelling it!

As we did head up Scot's the sun was so bright you could NOT see where you were going.  Here is what it looked like. 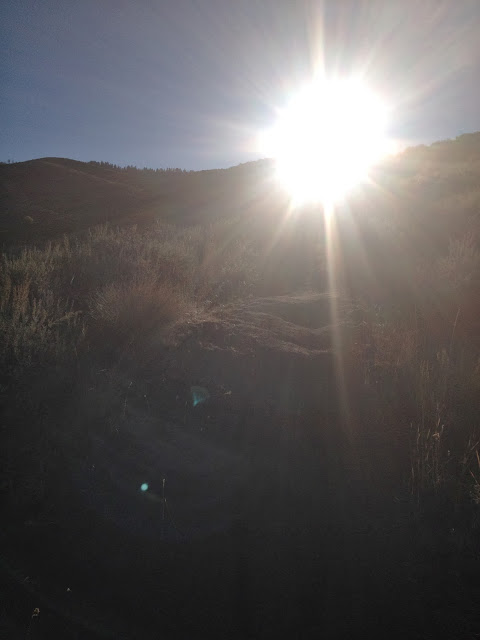 Now try to imagine a skinny one track trail with rocks and how hard it was to not fall.

When we got down into #0 the sun was no longer a factor.  as we ran along enjoying the fall colors we someone got onto the discussion of how the first Olympic games was done completely in the nude.  I then told Michele that I thought the definition of gymnast was like naked dancing or something.  Now you have to understand when we talk on the trail runs we are really yelling so that we can hear each other.  During this naked and nudity discussion, we didn't realize that there was a couple walking their dogs right in front of us waiting for us to pass.  WHOOPS!  At least we gave them something to talk about for the next hour or so....

This trail run is best described in photos....