The Ho Ho Ho 'nearly' Half Marathon on the day the world is supposed to end!

Merry Christmas!
Most people at this time of the year are busy out doing their last minute shopping and baking and mailing. Others are fearing the Mayans prediction that the world will end today, 12/21/12, and are hunkered down somewhere in a bunker.  WE are hitting the trails!  However today's second annual Ho Ho Ho Half-Marathon had to be a 'nearly' Half because I have been really sick!  I am probably border line pneumonia.  So why would I be out running the trails is the cold December weather?  If you have to ask that then you do not know me very well.
We started with a gift exchange...always so fun!  Kris brought us the best adornment for our run today! 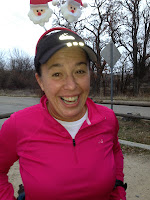 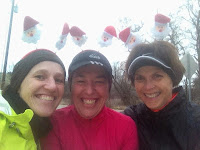 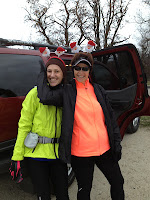 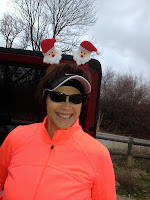 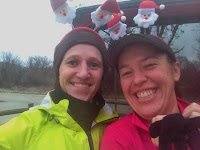 
﻿
It was a pretty cold morning.  But we dressed in layers.  The worst part was the wind.  You can run in anything...except the WIND.  It is so draining!  We didn't expect to see any other runners, but were surprised when a group of four ladies passed by.  They LOVED our "Ho-Ho's" and smiled as they went by.  Michele noted that there were four in that group.  "We could never run with a fourth person.  It would upset our balance." Kris piped in, "Oh I would welcome another runner with open arms!"  Yeah right, I think she just wants fresh meat to torture!

We parked at the upper parking lot of camel's back and started right onto The Grove, Owl's Roost and the Kestrel (aka the Highway).  It was getting windier and windier each step we took!  This was not going good!  The wind is NOT a runner's friend.  We had to run slower today too mostly because of me being sick.

We made our way to sidewinder.  It was so terribly windy at this point!  We had gusts hitting us at 40-50 mph!!  It's like the hills didn't want us up there and were trying to blow us off!  We kept hearing a weird noise as we turned onto sidewinder.  Michele yelled, "It's a truck!"  I wish you could see our faces when she suggested that.  A truck?  Up here?  We kept running and the noise continued. Finally Michele yelled, "STOP!"  She froze and said "Listen."  She could not go another step without knowing what that noise was.  We finally decided that it was the wind blowing the power lines around.  Whether that is what it was or not, it satisfied Michele and we were allowed to resume our run.

I'm not sure if this picture captures the wind very well, you have to look at their hair blowing. 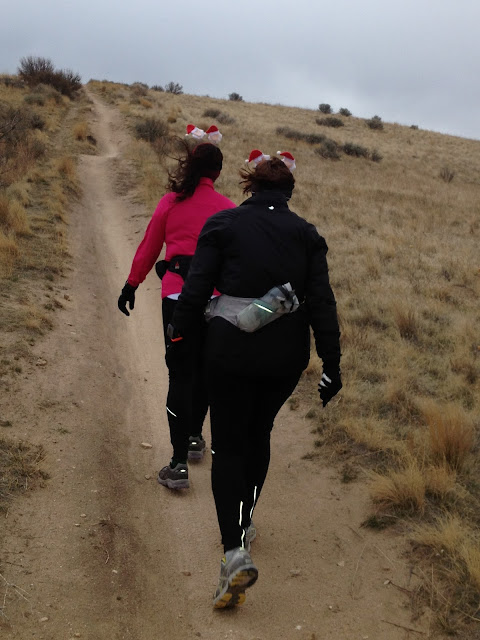 The wind got so strong that even walking grew cumbersome.  It took us an hour to go 4 MILES!!!  We were not taking our sweet time either, we were trying to move!  Finally we got to the Fat Tire Trail.  A change in direction and a decline and less wind HOORAY!  Kris had never ran Fat Tire.  I was so happy to share this moment with her!  We were excited to show her "Love Rock".  That is a place on Fat Tire where someone has made a huge heart out of rocks.  All the times we have ran by and I have never taken a picture.  Today I was finally going to.

Although I hadn't run for over a week my legs felt great!  If my darn lungs would just work better!  I decided I wanted to switch out my torso with someone else and keep my legs so I could run better.  Michele and Kris both agreed I couldn't run with their torsos because I wouldn't know what to do with the knew "upper" weight.  Oh they are sooooo funny!

Much to our disappoint as we came upon "love rock" it was no longer as it had once been.  Someone had changed to it read..."Love Biking".  We were so disappointed.  Kris suggested we change it to say "running" but none of had the energy to do so.  The wind was not only blowing, it was also sucking the very energy from our souls!


We came off Fat Tire and headed onto Freestone headed down towards Mountain Cove.  Michele and I have dubbed this portion of the run "suicide hill".  This is because it is really steep downhill and rutted and we had an intense tail wind throwing us down the hill.  It was scary.  Today was much more mild compared to last year.  So, it wasn't much of a suicide hill this time.  Then Michele had to go to the bathroom and POOF she disappeared into the bushes.  We waited, and waited, and waited. "Holy Cow what is taking so long!"  "My hands are stuck." Came a reply from the bushes.

Kris and I exchanged a look that read 'did she just say what I think she said?'  To which Kris yelled.  "We are not helping you with that!"  Haha turns out it was her PANTS that were stuck, not her hands.  That makes a lot more sense.

At this point in our run, our dear Michele began to go delusional and basically lose her mind.  It must have started when she was alone in the bushes going pee.  Because the next thing you know she is babbling about a rhyme that's so funny, "On channel four not last night but the night before..."  and then she burst into uncontrollable laughter.  It took her a good 5 minutes to control herself long enough to tell us that she was making a patty melt for dinner.  Then her hands went numb and she made us promise if she went permanently crippled we would still take her on runs by pushing her in a handicap stroller.  If it had been warm out I would have thought she was hallucinating by dehydration.  It was cold and windy, but not hypothermia cold.  I just can't say what was happening to her. 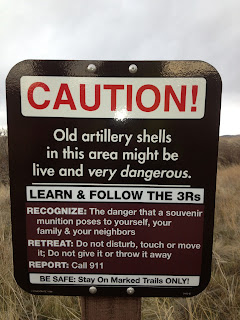 
We ran into our friend Brian just as we were about to drop onto Mountain Cove.  He turned our run into rated R with a stream of curse words when we told him how windy it was up top.  Gotta love runners!

Finally we reached the trail that was a MUST today, Military Connection.  This was the LAST trail for us to do to complete our resolution to run all the trails in the ridge to rivers system.  When I say us I mean Michele and I.  Kris is not in this club.  She did not endure 5mile Mile, 8th street, #4, and Femrite Patrol.  Those our the worst trails ever created, but you must run them to be in the club.

As we neared the top of the Connector (which yes we were walking because it is so steep!) I whipped out my pocket knife!  I was ready to cut off my trail anklet the second we finished this trail.  We saw a couple runners at the top.  "Hmm," I said, "maybe I should put my knife away."  Then I thought, "Maybe I should run with it and start yelling The World is going to End!"  After much laughter we decided that would definitely NOT be a smart idea!

We made it!  The cutting off of the anklet ceremony began!! 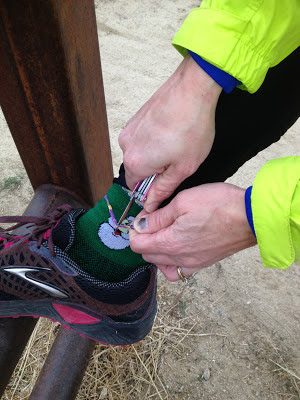 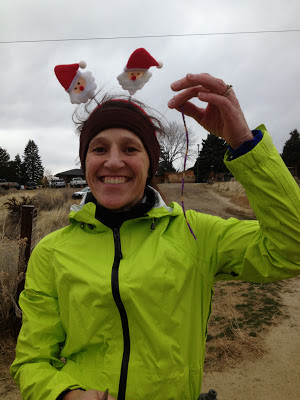 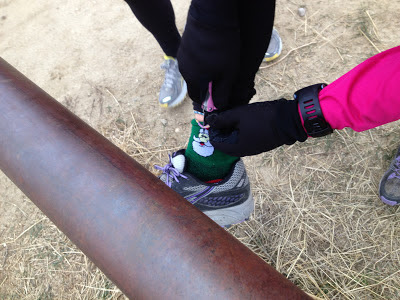 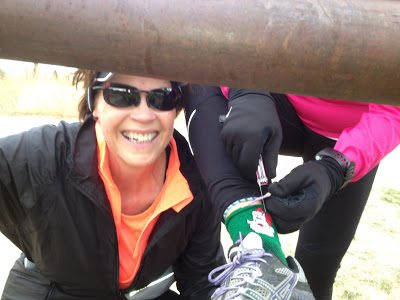 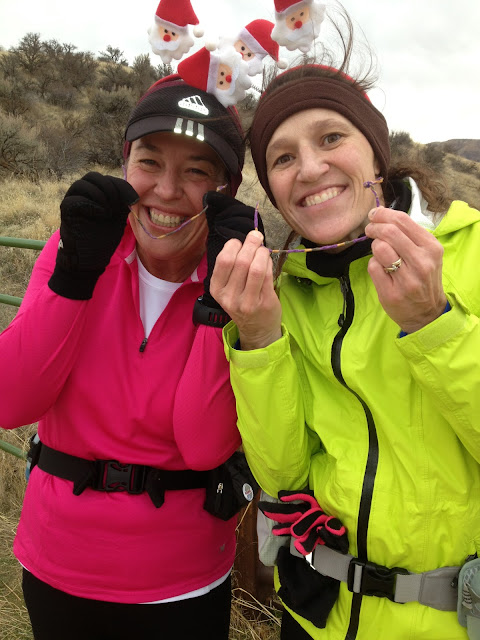 MISSION ACCOMPLISHED!!
It was all downhill from here baby! Kris wanted to run down Redcliff instead of the highway.  "NO!" I decided.  Someone had opened me up and drained all of the energy out of my body.  I was spent.  I knew if I stopped moving I was very likely to fall asleep.  I found myself eyeing each sage brush we passed to see if it looked comfortable or not.  This run needed to be done!
We finished, 10 miles. Not a half marathon in distance but definitely in effort.  We had the most wonderful thing awaiting us at the car..... 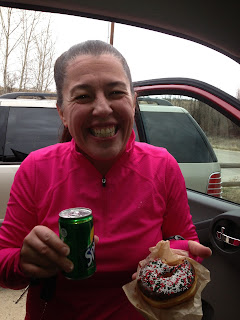 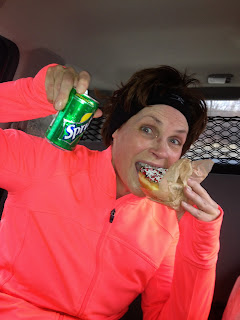 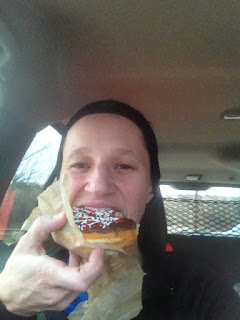